Following the 2015 Monaco Yacht Show we have published an article about the new ...
Browse News Section

Following the 2015 Monaco Yacht Show we have published an article about the new 85m superyacht concept OTTANTACINQUE, which was unveiled at the show by the prestigious Italian shipyard Fincantieri and renowned design studio Pininfarina. Today, we are publishing a short interview with Mr Paolo Pininfarina, Chairman of Pininfarina – Italian Design and Engineering Company, and Mr Marco Mazzù, Head of Origination Strategies and Market Development of Fincantieri, to learn more about this exciting concept.

Ottantacinque by Pininfarina and Fincantieri

CharterWorld: What brought Pininfarina and Fincantieri Yachts to the decision to collaborate together on this exciting new concept?

Mr Pininfarina: We have a very established partnership with the Fincantieri team. Our first project was the Destriero, in the early nineties: this vessel won the transatlantic “Blue Ribbon” award and became very popular at that time.

After several years Fincantieri and us discovered to have the same objective: to design and build together a super yacht in the range of 85 meters. Fincantieri has a very strong experience in bigger boats, recently we designed a number of smaller boats; so we found the perfect meeting point.

CharterWorld: The concept was launched at the 2015 Monaco Yacht Show. Have you had any feedback since the event and interests from potential customers?

Mr Mazzù: We cannot disclose current client discussion. However, we can confirm that the design and the collaboration raised a great interest among brokers and potential clients. There has been an unanimous appreciation on the style and on some of the innovative features and solutions included in the design.

CharterWorld: In your opinion, what makes the new OTTANTACINQUE different from other mega yacht concepts currently on the market?

Mr Pininfarina: The movement of the dockhouse volume from the bow to the stern of the boat has made its design very different from other designs in the same class.

CharterWorld: What type of Owner is the new 85-metre mega yacht concept suitable for?

Mr Pininfarina: The end user will have to be a fan of innovative design. Since most of the buyers in this market are still quite conservative the customer will probably be younger than the average, “a special owner of a special boat”.

CharterWorld: How suitable would this yacht be, should the new owner decide to enter the yacht charter market?

Mr Pininfarina: The boat has been conceived to be functional and user friendly, so it will eventually be perfect for the yacht charter market, too.

CharterWorld: Which main features would most likely appeal to a discerning yacht charterer?

Mr Mazzù: We have two different GA (general arrangement) configurations to suit slightly different expected lifestyles onboard. In common, as most relevant features for yacht charterer, they have the twin pools, which grant an enormous flexibility in the utilization of the main deck space aft, the ample beach club to grant a seamless experience with the sea, and different areas of aggregation for family and friends.

CharterWorld: How long would it take before the yacht could be delivered to her new owner?

Mr Mazzù: We expect we can deliver the current configuration in 39 months.

CharterWorld: Are you currently working on any other new superyacht concepts that you could share with our readers?

Mr Pininfarina: We are presently focused on the promotion of the Ottantacinque. 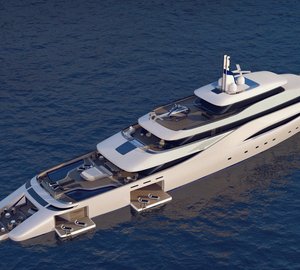 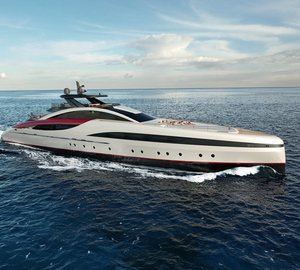