It’s no surprise that a luxury yacht named EXCELLENCE has come out of the ...
Browse News Section

It’s no surprise that a luxury yacht named EXCELLENCE has come out of the Abeking & Rasmussen shipyard which is known for the quality and size of its builds. 80m/262ft EXCELLENCE went to take the Exterior Design Award and Finest New Superyacht Award at the sixth Monaco Yacht Show Superyacht Awards Ceremony this year, a product of meticulous engineering and design spanning four years from concept to launch. 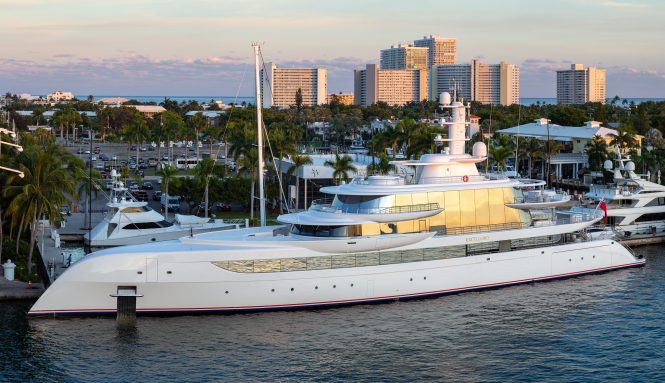 The journey began at the Fort Lauderdale International Boat Show in 2015 when the Owner of a fleet of luxury yachts named EXCELLENCE saw a concept for an 80-metre by British design studio Winch Design that would be built in conjunction with Abeking & Rasmussen – a shipyard he had used before. The latest EXCELLENCE would become the sixth superyacht of his fleet to bear the name.

If there is one material that characterises a modern luxury yacht, it’s the use of glass: Gone are the small portholes and square windows of yesteryear to be replaced by sweeping floor-to-ceiling windows that connect those on board to the surroundings. Nowhere is this more evident than aboard M/Y EXCELLENCE, where the amidships section sports a three-tier glass exterior of 25m/82ft. This mirrored glass is 8cm at its thickest and acts as insulation to reduce reliance on air conditioning systems. Held in place only by two slender steel frames, she represents a staggering engineering achievement. All these glazed surfaces match effortlessly with her silvery-white hull and superstructure, and onlookers are immediately drawn to the curve of her inverse bow which further adds to her futuristic appearance. 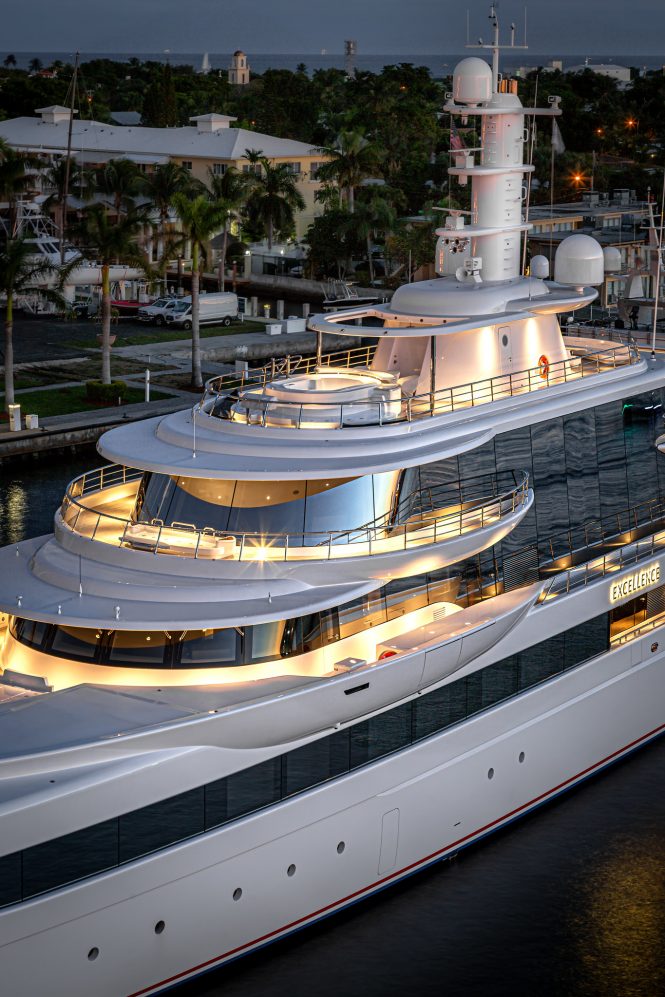 More than just good looks went into the making of this motor yacht, and guests on board can treat themselves daily to the main deck aft counter-current swimming pool with a glass-bottom panel, a private Jacuzzi on the Owner’s deck, and the bridge deck aft sports a 14-person alfresco dining table, a sumptuous lounge along the stern and a bar.

The Owner wasn’t considering charter use when EXCELLENCE was built and the result is a stunning contemporary living space from Winch Design that takes inspiration from the art deco styling to be found along Florida’s coast. His passion for sports cars is also on display and paid tribute to in styling accents such as the Cadillac-style cream sofas in the skylounge that have metal grille detailing, or the drawer handles which mimic the badges found on the front of cars. 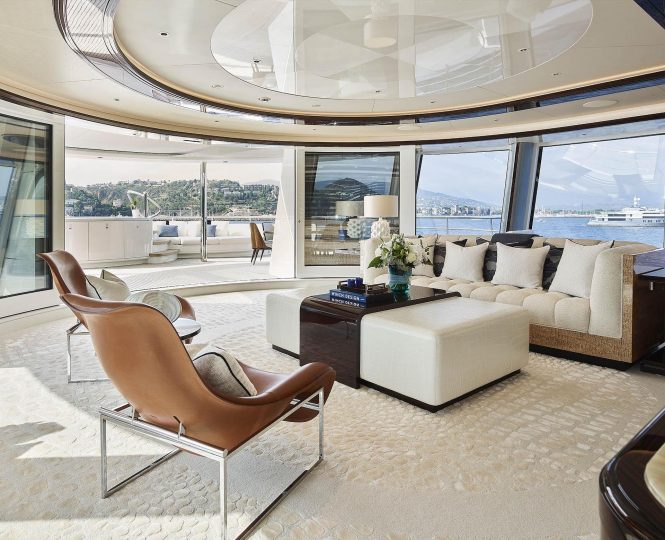 The makassar wood and marble tops contrast harmoniously with the ivory white carpets and upholstery, and accents in light taupe to bring everything together. There are over 30 different marbles used on board, with golden onyx. Colourful and playful artwork – such as the Mickey Mouse statuette – personalises different spaces on board.

Amenities certainly aren’t lacking inside either, as guests move to the nine-person cinema or the main deck spa fitted with hemlock and teakwood stone from Paonazzo, and containing a sauna that has excellent views out of its large windows. The tender garage opens up through side hatches to launch and retrieve the custom tenders and create a more alfresco environment for those taking refreshments at the bar between the beach club and the tender garage. There is also a great selection of water toys stored here, including Scuba diving gear, a RS200 sailing dinghy and Seabobs. 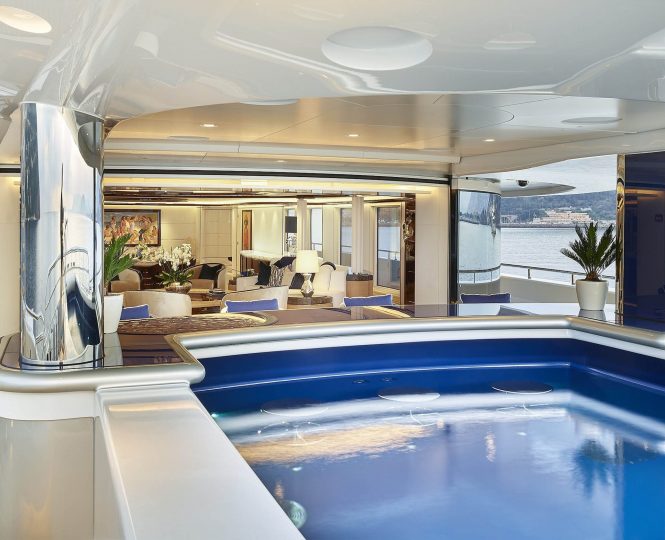 The engine room is almost forgotten about by guests who enjoy the latest technology for reduced noise and vibrations, but twin MTU 12V 4000 M65R diesel engines provide the power to cruise from one destination to the next at 14 knots or at a top speed of 17 knots when in a hurry.

There are seven en-suite staterooms to provide for up to 14 guests on board, and the Owner was adamant that the six guest cabins would be of equal size (25m2/269ft2 in area) and of equal luxury to avoid competition. Each room is finished in high-end materials such as makassar wood, marbles and leathers. Mirror-sheen headboards emphasise the space and light within each cabin, which has TV entertainment opposite the bed and a desk right beneath the broad windows for guests who need to continue work but don’t want to miss out on the adventure. 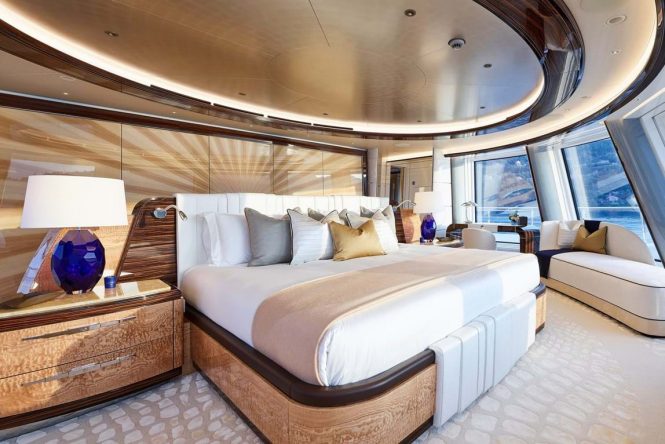 The Owner’s suite in particular is furnished with a wool carpet and enjoys sweeping forward views through floor-to-ceiling windows, and oversized armchairs accompany the daybed and desk to create a functional private space elsewhere, the en-suite bathroom has crocodile skin-style frosting patterns on the large showers and directly outside is an alfresco lounge where guests can wake up to coffee in the fresh air. The Owner also has access to a library/office space where silver leather is pressed with tobacco leaves and birdseye maplewood surround those seated at the desk.

Luxury yacht EXCELLENCE is an example of revolutionary engineering which will no doubt lead to further changes in superyacht design in the future – and she will be thoroughly enjoyed by her Owner and his guests in the cruising seasons to come. 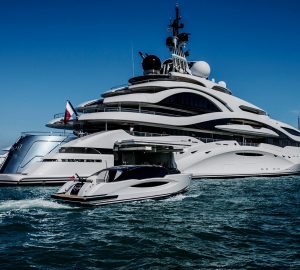 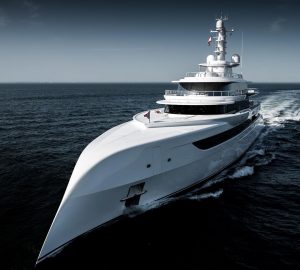 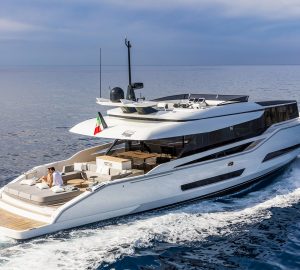 The hottest and most fashionable superyachts for charter in 2020