There have been numerous James Bond-related superyachts cruising throughout the ...
Browse News Section

There have been numerous James Bond-related superyachts cruising throughout the Mediterranean and the Caribbean for the last four decades, and in most cases the names can be attributed to a single owner: John Staluppi. Rising from rags to riches during the golden age of the Automobile, the New York millionaire is the fulfilment of the American dream. 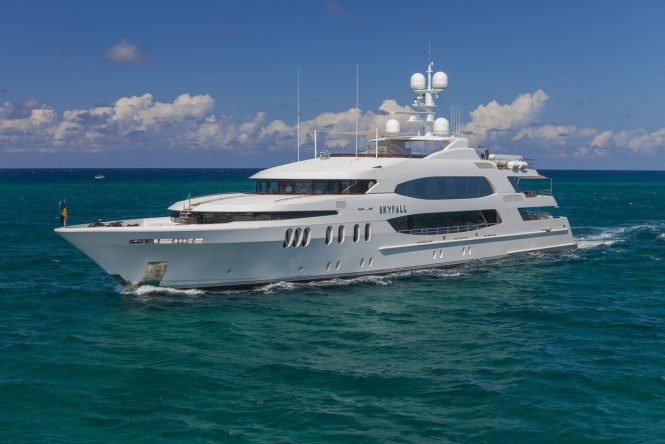 Starting out as a mechanic, his father quickly recognised his talent with automobiles and took out a loan on the house for his son to own a Sunco station. From there, John Staluppi gained enough success and experience to take a chance on the unknown Japanese brand Honda. Within ten years he had 20 dealerships and had expanded from motorcycles to cars.

His love of all things fast was not limited to wheels and in the mid-80s Staluppi owned his first superyacht. The high-speed nature of his vessel was reminiscent of the unusual gadgets and high-octane vehicles of the James Bond films, leading to the beginning of a naming convention that would last through the decades.

Due to launch before summer 2018, 69m/226ft motor yacht SPECTRE is the latest hull from renowned Italian shipyard Benetti. Mulder Design reprises its role as naval architects for John Staluppi, while the interiors will be completed by Giorgio M. Cassetta. 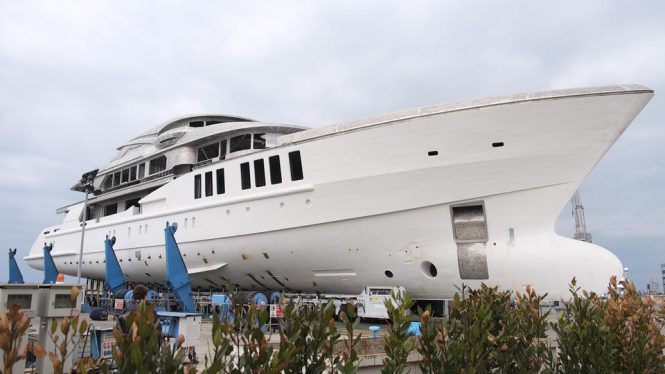 With a top speed of 21 knots and a cruising speed of 12 knots, she may not be as fast as her predecessors but she has four decks dedicated purely to guest enjoyment and an extensive range of 6,500 nautical miles. 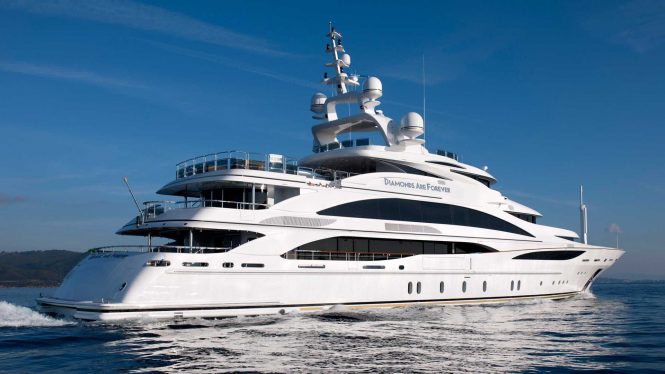 The lavish amenities include a spa massage room, a beauty salon, a sauna and spa pool, a helipad and two Master suites. The accommodation has six cabins to sleep up to 12 guests and her skilled crew of 15 will keep events running smoothly.

Built by Trinity Yachts, 58m/190ft luxury yacht SKYFALL (ex.MI SUEÑO) is another from Staluppi’s collection available on the charter market and she offers guests timeless interiors for a relaxing and elegant holiday shared with family and friends. 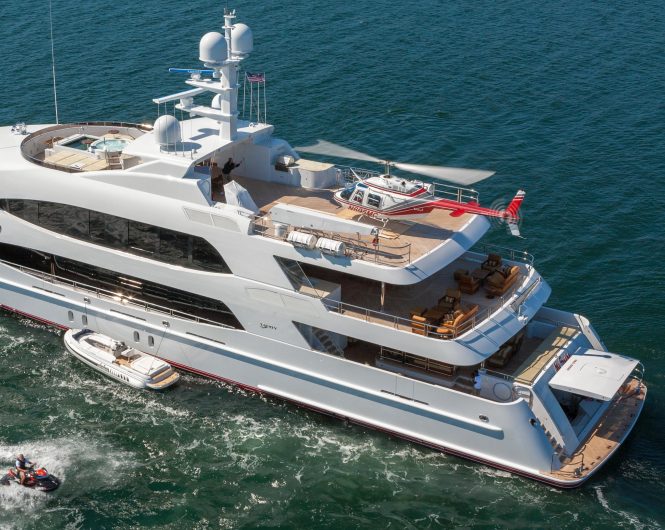 Her large outdoor deck spaces are ideal for lounging in the warm breezes and the sundeck in particular offers a lounge, a deck area and hoop for basketball, a sundeck pool and a separate Jacuzzi with a swim-up bar.

Accommodation provides for 12 guests over 6 cabins, which includes a full-beam Master suite on the main deck forward.

After attempting to reach 70 knots, Christensen-built superyacht CASINO ROYALE was a clear-cut departure from speed and a move towards luxury, capable of a leisurely cruising speed of 13 knots and a top speed of 16 knots. 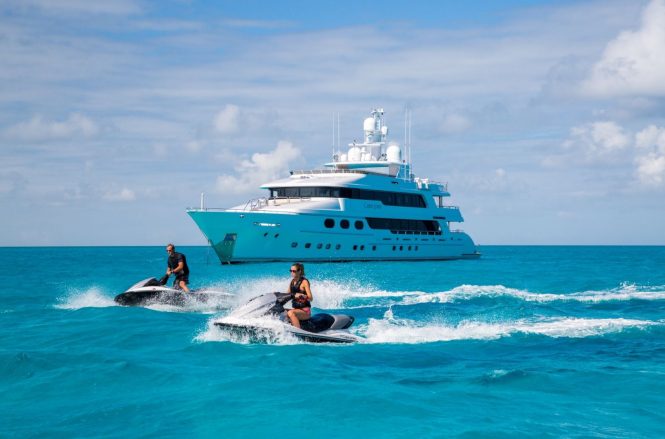 Currently available on the charter market, she features interiors from Carol Williamson which were last refitted in 2015. The exceptional interior and exterior living spaces are matched by an equally stellar crew of 9, and the guest accommodation sleeps 12 guests over 6 cabins, one of which being a full-beam Master suite with a spa pool and multi-jet shower.

In 1998 Staluppi began building his own shipbuilding company called Millennium Super Yachts, which later formed part of Neptunus-Millennium in the Netherlands. 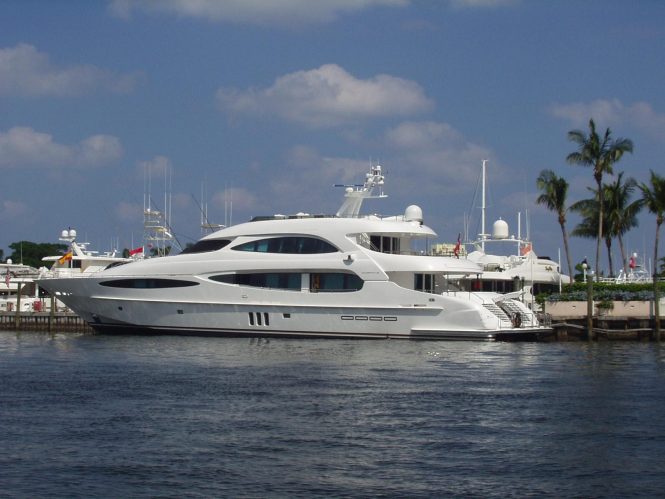 World is Not Enough

To this day, Staluppi maintains that 42m/138ft superyacht THE WORLD IS NOT ENOUGH is his favourite:

‘That boat was set to do 70 knots, but we could never get it to steer over 66 knots,’ Staluppi reminisces. ‘As soon as it got to 65, 66 knots, it would either spin out to the right or the left. It was a massive spin-out, like being on a WaveRunner. We never ran that boat over 90 per cent power.’

Despite never reaching the desired 70 knots, Staluppi had plenty of fun outracing the other luxury yachts:

‘Sport-fishing boats had started doing 42 knots, 44 knots, and some of the smaller boats did 50 miles an hour… We would go by those boats, I would have a cocktail in my hand, a nice martini and give the people a “how you doing?” Nobody could believe it.’

It was only a year and a half after OCTOPUSSY was launched that Staluppi set his sights on an even faster yacht and commissioned Frank Mulder and Norship to make his dream into reality. Superyacht MOONRAKER reached 61 knots, which beat his closest competition, HH the Aga Khan, by 4 knots. 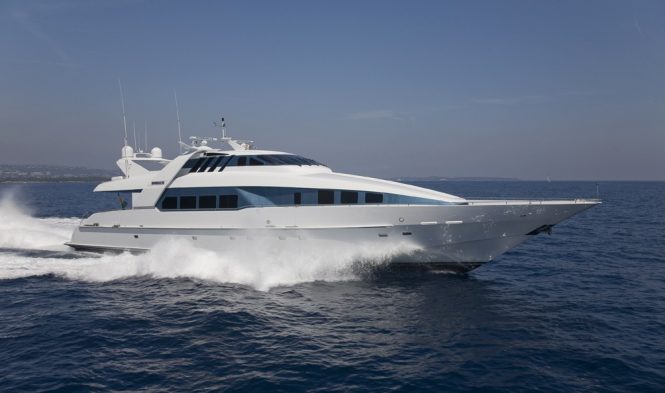 Built from a GRP hull and superstructure, she has a draft under 2m/7ft and a beam of 7m/24ft. The interiors were completed by Terence Disdale and feature elegant staircases, nautical murals and an abundance of outdoor space, including a sundeck fitted with a wet bar and Jacuzzi.

36m/118ft MOONRAKER also represented a shift in tone for John Staluppi; whereas before he was commissioning motor yachts for his passion for speed and high-end travel, he was now also considering the commercial side of superyachts, especially after OCTOPUSSY sold so well.

In the 1980s, Frans Heesen was still establishing his shipyard’s reputation on the global stage when he was approached by John Staluppi to build the fastest yacht in the world. Together with Frank Mulder, they created 54m/178ft superyacht OCTOPUSSY, the yacht that would make or break Heesen‘s name. 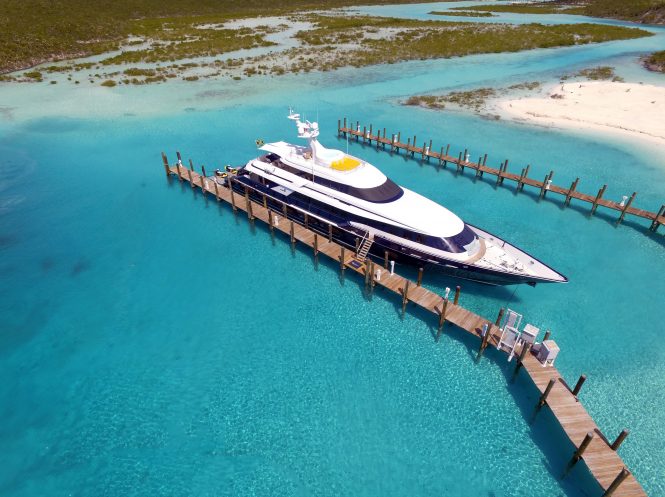 As part of the build contract, Staluppi could choose not to take OCTOPUSSY should she do fewer than 50 knots at top speed. When the time for her sea trials came she proved she was capable of 50.5 knots, but Staluppi believed she could go even faster and promised Frans Heesen an additional $200,000 for every knot over 51 knots she could achieve. By removing the chines and reducing the drag, OCTOPUSSY reached 53 knots and Heesen became $400,000 richer.

OCTOPUSSY has since been available on the charter market and boasts a full-beam Master suite, an aft formal dining area that can be opened up to the main deck aft to create a lavish alfresco eating area, and a sundeck Jacuzzi with plenty of sunpads. Her accommodation sleeps up to 12 guests over 5 cabins and has a crew of 7. Although a refit and hull extension means that she is no longer capable of 53 knots, she will still take her guests through the Mediterranean in haste and style.

The first yacht owned by Staluppi, luxury yacht FOR YOUR EYES ONLY was a 36m/118ft hull built by Denison in 1985 and has since been known as DYNAMO V, LAKEWOOD LADY, I DON’T RECALL and most recently WANDERLUST. 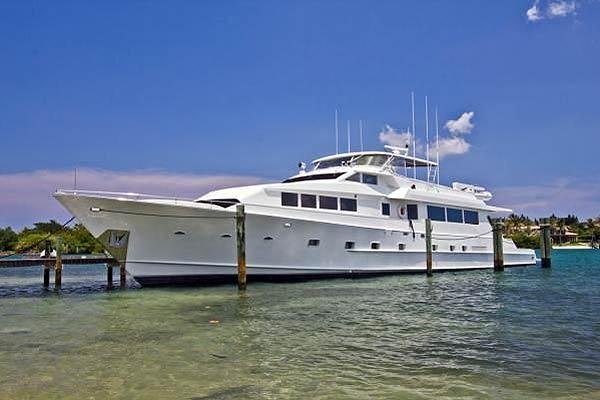 For Your Eyes Only

‘I really wanted to have something different,’ says Staluppi. ‘I wanted to build the first boat over 100 feet (30.5 metres) that would go over 30 knots.’

Built with an aluminium hull and superstructure, M/Y FOR YOUR EYES ONLY has an impressively shallow draft of 1.4m/4.5ft, making her perfect for approaching close to beaches and entering sheltered bays and coves. Her accommodation sleeps 8 over 1 Master cabin, 1 VIP stateroom, 1 twin cabins and a further cabin that sleeps three. The crew accommodation is designed for up to 4. Coupled with her impressive cruising speed of 23 knots and a top speed of 30 knots, she has stood the test of time.

The high-speed nature of his luxury yacht was reminiscent of the unusual gadgets and high-octane vehicles of the James Bond films, leading to the beginning of a naming convention that would last through the decades. 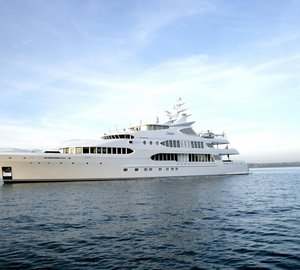 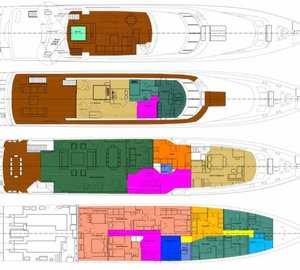 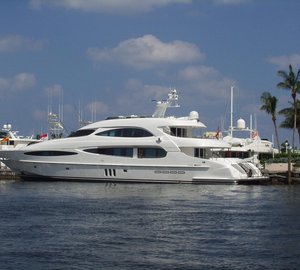 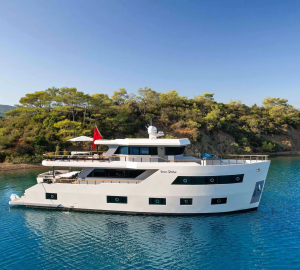 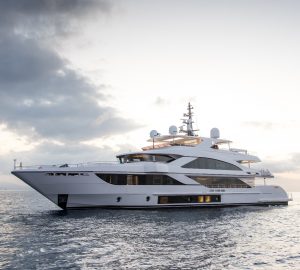 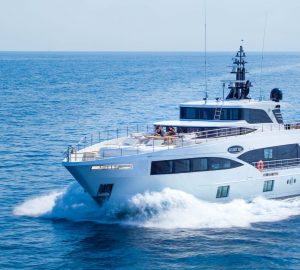