Cantiere delle Marche has successfully delivered, once again perfectly on time, the all-new Darwin Class motor yacht ACALA. Third launch of the year for Cantiere delle Marche after the success at the last Cannes Yachting Festival, superyacht ACALA is a beautiful 102-foot explorer in steel and aluminium, set to be presented during the next Fort Lauderdale International Boat Show (FLIBS). 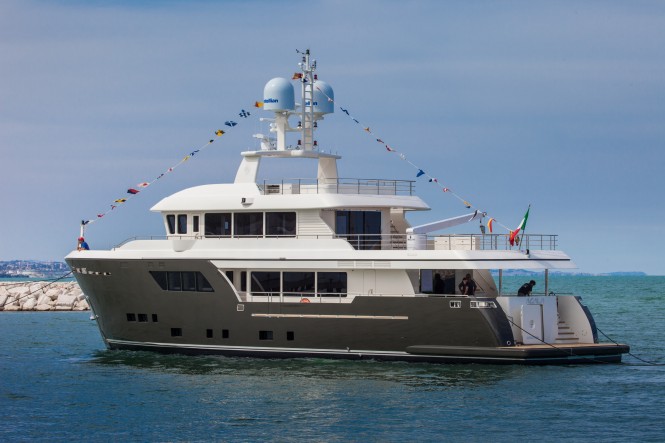 Built for a Central American client who has a notable experience dealing with the most prominent Northern European shipyards, luxury yacht ACALA is the result of a close collaboration between the shipyard’s in-house team and the owner’s team of consultants. In fact, ACALA is an Explorer Yacht in which the soul of Cantiere delle Marche and the personality as well as travel plans of the owner find a perfect balance in every detail.

Plenty of specific customizations can be found aboard ACALA yacht, including the lazarette, equipped like a real diving station with a nitrox compressor, the  5-cabin layout with the master cabin forward, the doors of the two huge saloons that can open completely, air conditioning even in the outdoor areas, generous spaces for the crew of up to 7 in 5 cabins, and much more. Also, thanks to the increased spaces in the swim platform, the yacht can easily host two tenders unusually big for a yacht of this size: a tender custom built by McMullen and Wing of 20′, and a second of 16′.

The interiors are designed by the famous South American designer Simon Hamui that, having worked with the yacht’s owner on some of his houses and offices, has interpreted and adapted his own style to the amazing spaces as well as heights that ACALA superyacht boasts.

The launch event of luxury yacht ACALA was marked by the emotional atmosphere and great participation: “There have been 12 hours of beautiful feelings, full of smiles and tears for the intensity of the moment,” commented Vasco Buonpensiere, Sales and Marketing Director of Cantiere delle Marche. “When the owner talked to the participants in casual chatting, the most repeated words were “Family” (as in the CDM Family) and “Friendship:” a confirmation that the atmosphere within this shipyard and synergies that are formed between the protagonists of each project (owners, crew, management, employees) are special. This success and the large number of yachts either delivered or under construction has not changed at all values on which this wonderful shipyard is founded.”

Ennio Cecchini, CDM founder with Buonpensiere, also stresses the importance of the Darwin Class explorer yacht ACALA for the future of the CDM: “We come back to Fort Lauderdale after three years with an Explorer Yacht that is extraordinary under every point of view. In the shipyard we say that this is the smallest ever built 60 meters and we say this because of the many solutions that are not normally found on yachts of this size. Just look at the garage: its components and the organization of space and stowage are enough to understand it. This boat will be an incredible success for the Overseas markets, and the number of appointments already set for the most important American Fair – if not the World’s most important Fair – is a strong sign!” 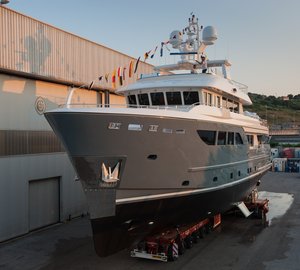