With everything to play for on the final day Artemis completed a great recovery ...
Browse News Section

With everything to play for on the final day Artemis completed a great recovery to win the Camper Regatta – Conde de Godó Trophy Barcelona. Madrid – Caser Seguros won last race to win the event, and is the new GP42 Series leader.

With Madrid-Caser Seguros (ESP) winning the GP42 Series, three different boats have won each of the three regattas this season so far in both TP52 and GP42 Series, confirming this is the most open Audi MedCup Circuit season ever.

Leading into the one and only race of today by a single point, the odds looked suddenly to be stacked against an Artemis regatta win when they picked the wrong side of the first beat and rounded the top mark in eighth place, with their main rivals Emirates Team New Zealand (NZL) in second.

But two electrifying downwind legs, twice gybing away for clear air and flatter water, diverging from the line taken by the pack, saw Cayard and crew gaining three places on each run to secure Barcelona’s top trophy. 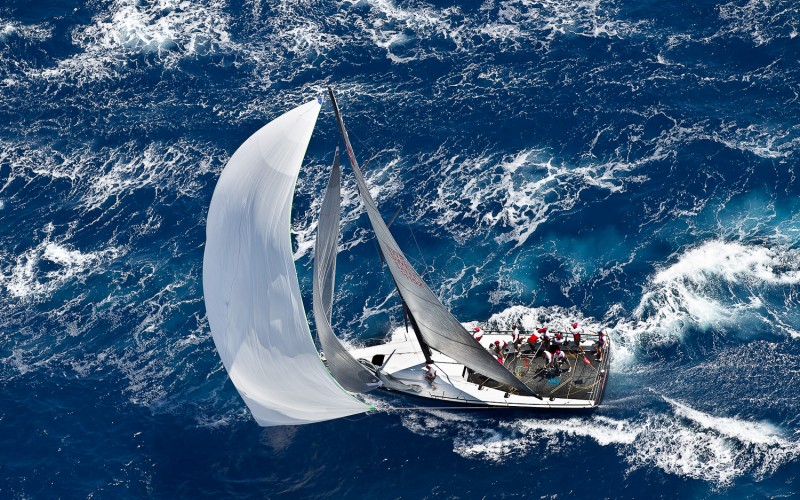 Emirates Team New Zealand at one stage seemed to be hanging on, just on target for their second regatta win of the season, with Luna Rossa (ITA) between them and their rival Artemis representing the 1-point margin that they needed to win, but in the end the Kiwi champions could do nothing to control the firepower of Artemis downwind.

On the final run Cayard, tactician Cameron Appleton and the Artemis crew gained 44 seconds, to cross just 16 seconds behind José Cusí’s (ESP) Bribón who finished their regatta with a flourish to clinch a creditable fourth overall in owner Cusí’s home city.
Artemis top the Camper Regatta – Conde de Godó Trophy – Barcelona TP52 fleet after a miserable Marseille, where they finished eighth overall. In Barcelona they have sailed with confidence and cohesion, bolting together all of the required components to win a testing 10 race series.

Third overall last season their overall win at the first of two Audi MedCup Circuit regattas in Spain this season, boosts Tornqvist’s team from sixth overall on the 2010 standings to third.

Artemis last won a MedCup regatta in Hyeres, France in 2007 when Russell Coutts skippered the team to win the Circuit title. In that season five different boats won the five regattas.

Emirates Team New Zealand finish disappointed not to have won in Barcelona. They were hobbled for boat speed at times, citing a plastic bag that they caught around the rudder which left them lacking speed.

But the reigning title holders head to Cartagena for next month’s (August 24-29)  fourth regatta of the 2010 season, the Caja Mediterráneo Region of Murcia Trophy having extended their overall lead by ten points at this regatta. They now lead Quantum Racing (USA) by 28.5 points.

GP42 summary
The last race in the GP42 Series saw the team that has dominated all week – Madrid-Caser Seguros (ESP) – win their sixth race in the nine race series, nearly from start to finish.

A strong start by Iberdrola (ESP) and AIRISESSENTIAL (ITA) put them into contention all the way to the first mark rounding, but a big four-boat pile-up at the mark had Madrid-Caser breaking free, followed by Iberdrola, and the Italians doing a penalty turn at the mark.

And with the breeze building up to 17 knots, the two B&C-designed sisterships – Madrid-Caser Seguros (ESP) and Islas Canarias Puerto Calero (ESP) – were able to put their speed to advantage and finish 1-2 on the day, despite a last-second charge to the line by the Iberdrola green machine.

The two are also now tied on 50 points each in the overall series, with Madrid-Caser Seguros now taking the lead on the tie-break.

The next Audi MedCup Circuit event is the Caja Mediterráneo Region of Murcia Trophy, Cartagena, August 24-29 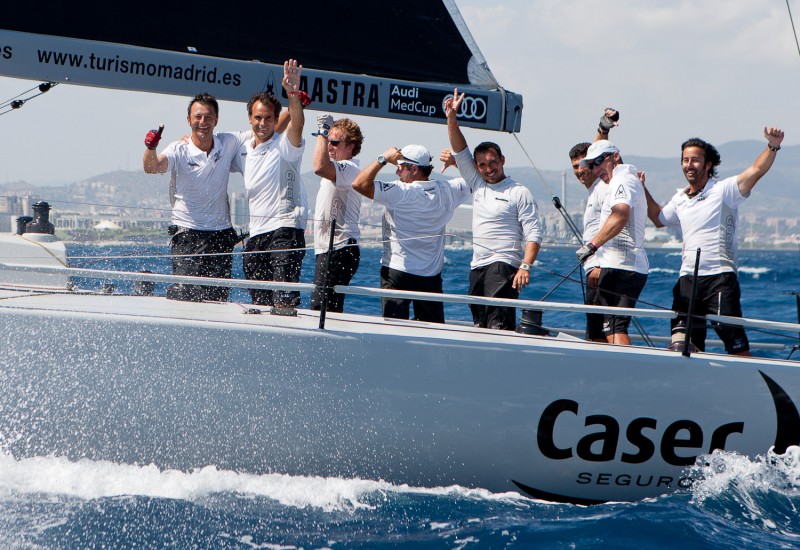 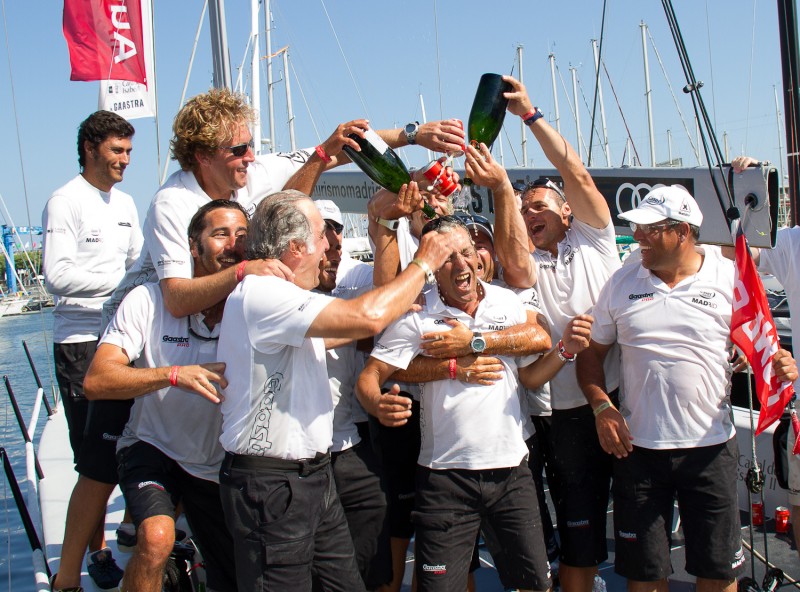 Quotes of the day

Paul Cayard (USA), helmsman Artemis (SWE):
“We are very very happy, mostly, because what we are trying to build here on Artemis is a process to go out and win races and that comes from a certain amount of confidence and stability and the boat the crew, our starting and we really lost that in Marseille, so more important really than winning the race, or being second, or third to me is just that we come back and we are very, very competitive. And that’s a great way to go forward, for the Medcup becauset also we were trying to work with the America’s Cup.”
“ We were really quick downwind the whole week, and noticed that on the first run obviously so as soon as we came round the mark I was kind of urging Cam just to give me clean lane.”
“We could go really fast if we don’t have the wakes of the other boats so we had surfed right up to Prada almost immediatly and it didn’t really matter which way we went, or  which way the wind was going to go, we just wanted to get away from boats so we could just rip.”
“And it seemed we had a better gear than anybody else downwind and that let us slip just right on through. It couldn’t have been more exciting than that, coming down to the last race”.

Gonzalo Araujo (ESP), skipper Bribón (ESP):
“Winning the last race always adds a positive note. Today we confirmed our improvement throughout the second half of the event. And as I always say in this circuit we all have the level to win races, it’s a matter of racing well. After the start we’ve gone to the right to get the clean air from the others, but we didn’t have a good start, didn’t get ourselves a gap. Marcel (Van Triest, navigator) told us to go further in, since it was going to shift to Garbí. So a big part of this win is his”

Paolo Cian (ITA), skipper/helmsman Madrid-Caser Seguros (ESP):
“If there was one thing we did well this week, it was our focus on the little things we did before the regatta to get us the small edge in speed. In a class this tight, this small edge means a lot.”

Juanlu Páez (ESP), navigator Madrid-Caser Seguros (ESP):
“We made a good start, Islas Canarias was called over the line what obviously helped us, cause we then had the control and our boat sails fast, so it all went perfect, the 17 knots wind were also excellent conditions for us. Islas Canarias is a very good team and they’ve been able to come back, it’s clear she’s our main rival. The boat is the same, and we also have same sails, mast, so we’ll probably keep fighting against till the last day. It wouldn’t surprise me if it all came to the last race in Cagliari”.. 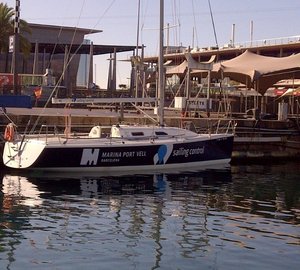 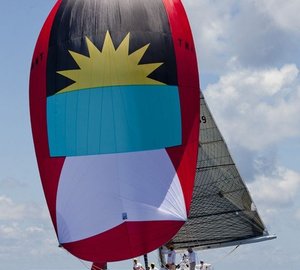