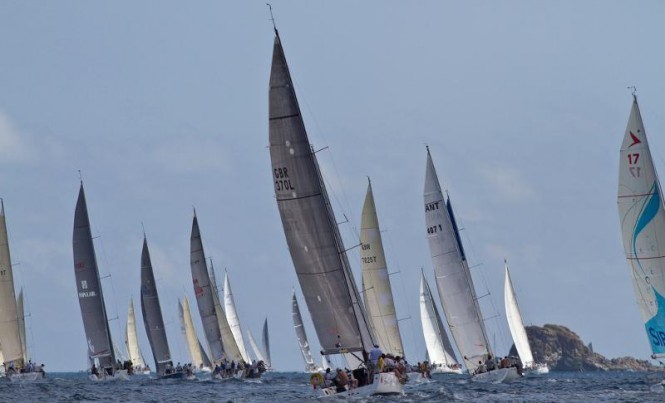 It was one of those yachting days made for superlatives, and official scorer and “regatta guru” Paul Miller unleashed a torrent of them. “The sparkling turquoise waters made for champagne sailing,” he said. And he was right.

On Day 3, the wind blew. And blew. First hard. And then harder. For the crews of the 202 yachts who’d descended on St. Maarten to race sailboats, it was what they’d come looking for, and it was definitely worth the wait.

After Saturday’s race to Marigot, the fleet reassembled on the western, French side of St. Maarten today to put the finishing touches on what had evolved into yet another memorable edition of “The Heineken.” With solid breeze gusting to over 20-knots, the race committees for both the A and B fleets took full advantage of the sweet conditions and sent the racers on challenging courses that took them into and across the Anguilla Channel before a long upwind leg along the island’s southern shore to a finish line off Simpson Bay.

The B fleets that included all five Bareboat classes, Multihull divisions 3-5, and the Lottery Class sailed a 15 nautical-mile course starting in Marigot Bay.

The Multihull 1-2 classes, and CSA 1, all competed on a 29.5 nautical mile course that took them to a turning mark off Tintamarre before turning downwind into the Anguilla Channel; the other CSA 2-8 classes sailed a slightly abbreviated 22.5 nautical mile race. The timing was such that the entire fleet converged on Blowing Rocks off the western point of Anguilla en masse, and the sight of dozens of race boats shredding across the clear waters was sensational.

The B fleet spun around a turning mark just inside the reef. But the CSA and Multihull racing classes in the A fleet came ripping down the Anguilla Channel under spinnakers and rounded Blowing Rocks before dousing their kites and trimming sails for the final leg to Simpson Bay. Those who witnessed the spectacle will no doubt remember it for some time.

While several crews in some of the classes came into Sunday’s racing with comfortable leads, there was plenty at stake for many of the competitors in several other divisions. In the CSA 1 battle between heavyweights, Jeremy Pilkington’s Baltic 78 charter yacht Lupa of London, and Jan Rupert’s Tripp 75 sailing yacht Blackbird, came into Sunday’s racing with identical scores of three points apiece. From the outset of the race, the two giants were locked head to head, effectively beginning what turned into a long, closely contested, point-to-point match race. In the end, it was Lupa’s day to shine, and with a Sunday victory the sleek 78-footer reigned supreme in the big-boat class of this year’s St. Maarten Heineken Regatta.

CSA 3 was another class that was up for grabs on Sunday, and it was stacked with talent, including last year’s recipient of the Most Worthy Performance Overall Award, Richard Wesslund’s El Ocaso. But El Ocaso’s uncharacteristic 14th in Day 1 ultimately proved to be too high an obstacle to overcome, and in a major surprise, the boat was denied a podium finish.

So on Sunday, in CSA 3 it came down to Sergio Sagramoso’s J/122 yacht Lazy Dog-a perennial Heineken Regatta contender-and a newcomer to the fleet, Greg Slyngstad’s J/125, Hamachi. The latter sailed a tremendous race, and was the first of all CSA boats to round Blowing Rocks after flying down the Anguilla Channel under a huge, white asymmetric spinnaker. When the spray settled, Hamachi was second on Sunday, and Lazy Dog won the final CSA 3 race on corrected time. Remarkably, however, both boats were tied with identical scores of 15.5. But Lazy Dog’s last day victory proved to be the difference, and the crew from Puerto Rico earned the title of CSA 3 champ.

In CSA 5, St. Maarten skipper Alain Riouallec’s Bachi-Bouzouk, a Sigma 41, capped a consistent series with a fourth on Sunday that was enough to wrap up their 11-boat class. And with great scores throughout the weekend-including a first in Sunday’s race-Remco van Dortmondt’s Sunbelt Realty DASH, was the undisputed victor of CSA 6. Finally, in separate scoring for the six Melges 24s in the field, Andrea Scarabelli and Team Budget Marine/Gill topped the tight one-design fleet.

Among the catamaran and trimaran fleets, the Gunboat Elvis-and there was a sighting of “The King” dancing on the foredeck moments after the start-was another boat that sailed a perfect regatta, notching their third consecutive first-place finish to win Multihull 1. Petr Kochnev’s Lagoon 500, Belisima, also won their class, Multihull 3, in three straight sets.

It was a far different story in Multihull 2, where Nils Erickson’s Formula 40, Soma, and Richard Wooldridge’s fast tri, Triple Jack, came into Sunday’s racing tied for first. Both boats nailed their starts and, with hulls flying, tore up the coast of St. Maarten nearly locked together. But Soma eventually pulled away and won both the final race and the class, while Triple Jack’s fourth on Sunday relegated them to second in Multihull 2.

For over three decades, the St. Maarten Heineken Regatta has showcased the top boats and sailing in the Caribbean, and has become equally famous for its world-class slate of parties and musical entertainment. Now recognized by sailors around the planet as one of the sailing world’s best regattas, each year the event lives up to its worthy motto: Serious Fun. 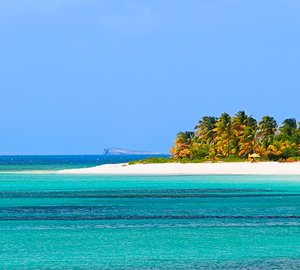 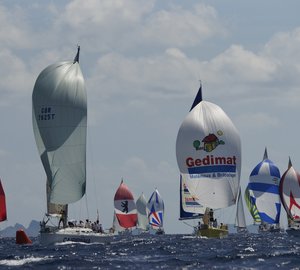 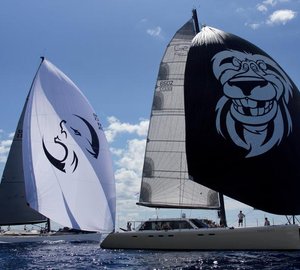 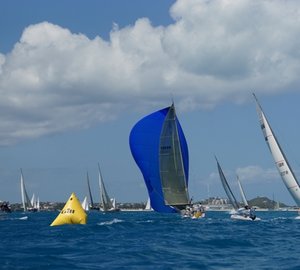 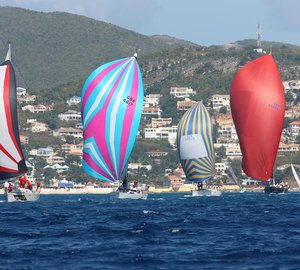