The fourth day of the Régates Royales-Trophée Panerai saw wind, waves, clouds, shifts as well as abandons. The classic yachts enjoyed an amazing competing in 25 plus knots of breeze, with two more for the Dragons in tricky conditions. 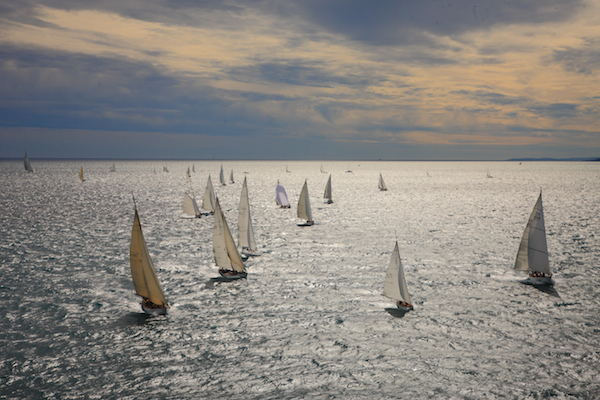 Cannes looked more like Brittany than the Cote d’Azur yesterday with its cloudy sky, choppy sea, a westerly/south-westerly topping twenty knots that put boats and crews to the test over a coastal course some ten miles long. Sure, the image of an imposing J Class flying downwind under asymmetric spinnaker just off the marina entrance will be rememberd as one of the most exciting moments on this 34th edition of the Régates Royales-Trophée Panerai.

Double winners in the breeze
Take a good start, not easy with a strong swell, sail a good first upwind leg, manouevre well in the fresh breeze, take the right tactical decisions… easier said than done. And very challenging indeed. So much so that some of the crews decided to head back to port after some minor breakages and technical hitches or due to the conditions being too strong for the rigs and boat builds. The sailing off Aiguille were exremely tricky, especially for the older boats.

Yesterday too the course was coastal, with an upwind tack to the îles de Lérins, then a long reach to the point of l’Esquillon, downwind to La Napoule and finally back towards Cannes. In the Spirit of Tradition division charter yacht Shamrock V got her third consecutive line honours and her first win on corrected time, followed by Nazgul of Fordell while four boats chose to head back in due to the heavy weather. Some like Dainty among the small Marconi, Leonore among the big marconi, Thendara yacht in the Big Boats division, got another consecutive win. One of the oldest boats in Cannes, Marigold (1892) earned a brilliant win amongst the gaffers. Finally White Dolphin succeeded in crossing the line in first in the Vintage class.

An Italian/Russian duel
The Russian crew on Annapurna yacht put together a good performance to close their gap on the Cloud from Italy, provisional leaders, who had the worst day in the series on the windiest and most challenging day so far. It was even worse for Denmark’s Soren Pehrsson (Blue Lady) who impressed for his consistency but today scored only a 27th. By good fortune, having sailed more than five races, these opaque results can now be discarded. On the second race of the day it was UK entry Bear, skippered by Martin Payne, who got to shine and jump up the provisional scoreboard thanks to a second. As the breeze got stiffer, the Race Committee launched the seventh race and it was Payne again to cross in first, followed by fellow countryman Yan Bradbury (Blue Haze) and by Giuseppe Duca (Cloud) while Anatoly Loginov (Annapurna) was only tenth. A good reshuffle of the cards on the table of the Dragons, since the first four crews are all in for the overall win on Friday.

One date, one class
5.5m I.R, 6m I.R, 8m I.R as well as the 12m I.R (that raced in the America’s Cup from 1958 to 1987), 15m I.R and other classes that didn’t last, they all derivate from the metre rule created in 1906 in London. At that time yachting was fast developing worldwide, from the USA to Germany, Australia, Spain, Switzerland, Scandinavia as well as in France and Italy. Yet, every country and almost every yacht club adopts its own rating rule for a very varied fleet, with very different boats adapted to the local race conditions. Thera are only a few international events apart from the ones on the Swiss lakes or in southern Britain.

These are called “restriction rules”, that is to say they limit the value of a certain number of parameters in order to guarantee similar boat performances, still not forcing to build strictly identical one-design boats. In 1901, the New York Club takes action to reform the Universal Rule in co-operation with designer Nathanaël Herreshoff.

Owners from Germany, Sandinavia, the UK and France agree and during a meeting held in London in 1906 they would create the International Rule (I.R.) that will give birth to a number of metre classes that would be more or less successful. Three years later, there were 195 I.R. boats among which 91 6m, 59 8m, 22 10m, 14 12m and nine 15m. The North Americans soon take on the new rule called “metric” that takes into consideration the waterline length, the girth, the freeboard, and the sail area.

From 1907, the best designers all use the rule, especially for the “Eights” that are 14 metres long, have 80 square metres of sail area and weigh nine tons thus allowing to play on different parameters to find the right balance. Scottish designer Alfred Mylne and William Fife, the Norwegian Johan Anker (who also signed the Dragon) and Bjarne Aas, Morgan Giles and Charles Nicholson from the UK, the American Olin Stephens and Thierry Guédon François Camatte, André Mauric from France, all work on this boat, that then becomes an Olympic class from 1908 to 1936. From 1958 the focus switches to the 12m that become popular thanks to the America’s Cup, going from wood, to aluminium and later to composite materials (carbon excluded). The other metre classes evolve at a steady pace according to the latest technical innovations.

The Régates Royales welcomes several famous “metric” boats like Mariska (Fife, 1908) one of the few surviving 15m or Seven Seas of Porto (Clinton Crane, 1935) that is the oldest 12m competing in Cannes while among the 8m it’s the famous Aile VI (Pierre Arbaut, 1928) that brings back memories of the charismatic female skipper Virginie Hériot which took her to the highest step on the podium at the Games in 1928, together with Helen (Alfred Mylne, 1936) and France (François Camatte, 1937). And finally, sailing on the bay of La Napoule there is one of the oldest 6m, Nada (William Fife,1937). With boats created by the best designers, winning in the metre classes is all but an easy task!

A valuable prize…
For the fourth consecutive year, the “lifestyle” supplement of the daily Les Echos called ”Série limitée” will support the Yacht de Tradition of the Year prize. The prize will be awarded to the traditional yacht that best represents elegance, authenticity and art of living. For this edition, the PYTA will be open to all classic yachts wishing to take part and sailing in British, Spanish, Italian or French waters.

All the selected yachts will be judged by a group of qualified experts who will make their decision next November and let it known during the Paris Boat Show and present the winner with the Tradition Yacht of the Year prize. The jury has already made two pre-selections and a third one started on September 15th and will end on October 12th.Classic Yacht owners have still time to enter the PYTA competition and join the yachts that have already been selected:
Vintage gaffers: Nan of Fife, OWL, Javelin
Vintage Marconi: Chisando, Oiseau de feu
Classic Marconi: Sonda, Palynodie II, Hilaria 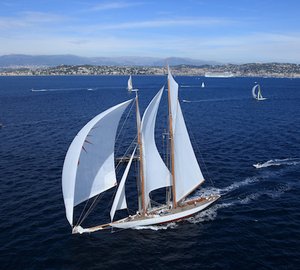 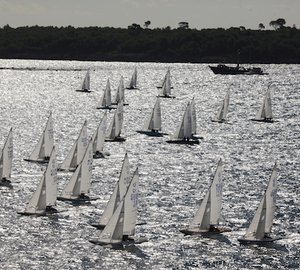