The second day of racing at the currently running 35th edition of the Régates ...
Browse News Section

The second day of racing at the currently running 35th edition of the Régates Royales – Trophée Panerai in Cannes was marked by the perfect conditions of 18 to 20 knots southwesterly breeze and choppy seas. The boats, sailing upwind or downwind in stiff breeze, the water spraying the decks, sailors pushing hard to hoist or take down the spinnakers as fast as possible, all made for the “usual” amazing show.

Judging by the big grins on the crews’ faces once they docked in and by the public crowding the pontoons, the day was a huge success on all fronts. From a purely racing point of view, today’s results contribute to draw a clearer outline of the battles that are in store for the rest of the week.

No sooner had the Race Committee fired the starting signal for the first race of day 2 in just bore midday with a good breeze of around twenty knots, the skippers sent their boats full speed off into the bay. From the îles de Lérins towards Cap Esterel, after a weather mark midway and a fast reaching leg to Mandelieu La Napoule, the boats crisscrossed the Bay on a 12 mile long course to the finish line moored just a few dozen metres from the Vieux Port de Cannes, for the delight of the many spectators crowding the Boulevard du Midi to watch the spectacle. Last to start, the bigger yachts quickly overtook the rest of the fleet, at times causing weird and close encounters as did the 50 metres long charter yacht Elena of London and the tiny 9,5 metre long, British sloop Jessie. 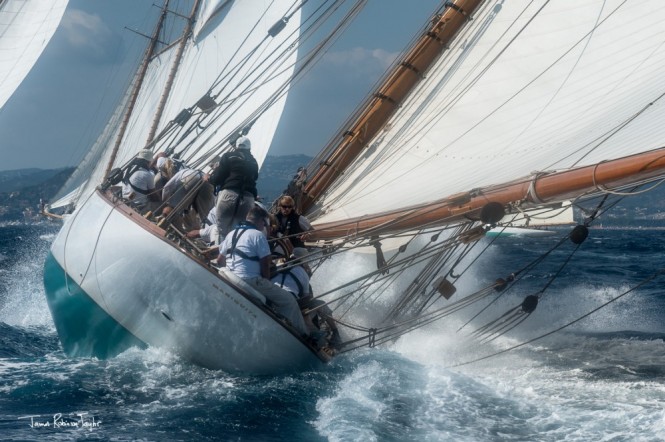 Some opted for more conservative tactics on the reaching leg to Mandelieu La Napoule, taking down their gennaker, Elena kept pushing on – almost on the edge – with her huge sails, literally jumping on the finish line. Line honours went to the big J Class charter yacht Shamrock V, who easily passed her competitors to cross in a record time of just 1 hour and 20 minutes.

The smallest boat of the “giant” class, sailing yacht Moonbeam III, added another first place to yesterdays opening race. “The conditions were exactly what we were expecting. But twenty knots is a bit too much for us. We kept almost all the sails up. Being the smallest boat in our class, we absolutely wanted to start in clean air and staying at the committee boat end of the line, we got a good start, pushing charter yacht Moonbeam IV out. We even hoisted the spinnaker but it was a bit at the limit,” said tactician and offshore sailor Sébastien Audigane.

Germany, UK and Russia lead the Dragons
The Dragons had two races today, in similar wind conditions as the classics but in easier, flatter water. With two more results the overall scoreboard positions have been shuffled, and thanks to a win and a fourth, Germany’s Pow Wow skippered by Michael Zanke has taken the lead, followed by Martin Payne’s British flagged Bear and Russian Mikhail Senatorov on Integrity, who made an impressive comeback from seventh to third. The competition will no doubt be even hotly contested tomorrow for the Mauritius Day as the winning team is to be awarded a trip to the tropical island.

The weather forecast for tomorrow is again for a sunny, warm day, possibly less windy than today, with a breeze that should not exceed ten knots. It will be turning point for the 35th Régates Royales – Trophée Panerai, as every scored point will become crucial. 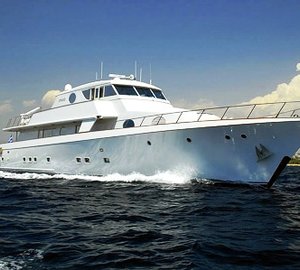 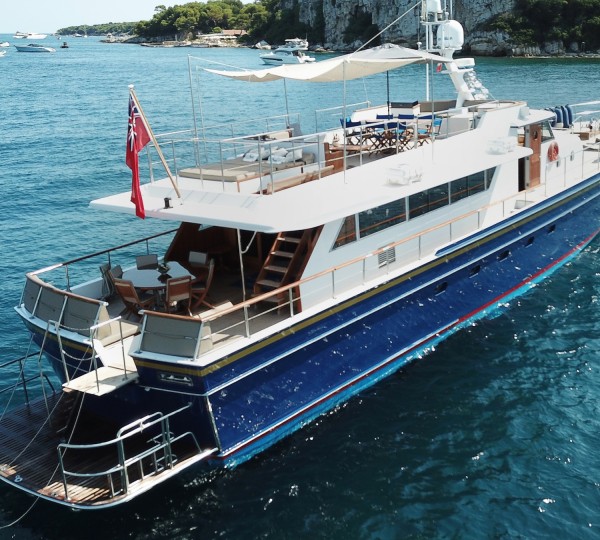