The second day of the popular Régates Royales-Trophée Panerai 2012 saw twelve spectacular vessels, signed by the renowned designer and builder William Fife, win in their respective class. He would have certainly enjoyed the day, marked by gusts and light air, as well as sun and rain. 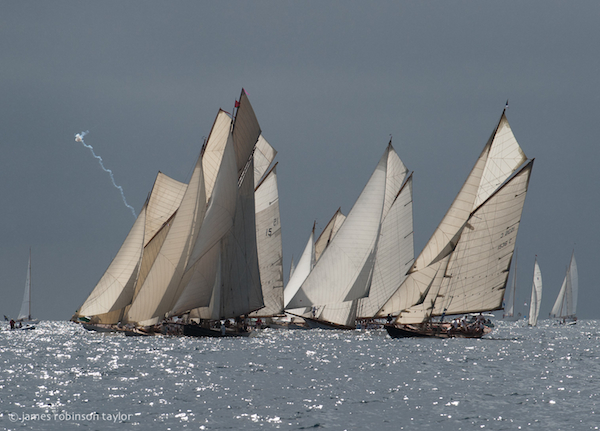 The weather conditions were all but stable today, strong gusts alternating to light airs, transforming the Bay of La Napoule almost in a mountain lake. Finally the five classes started in a flimsy five knots south-easterly to cover a coastal rectangular course around 9 miles long. It was a short lived pleasure as the wind almost completely disappeared, leaving sails flapping, boats trailing in the residual waves.

The fleet was left scattered over the bay while a massive rainstorm, almost a flood, hit. Luckily enough and shortly afterward the sun and the wind made their reappearance allowing the race to be sailed, albeit on a reduced course. Only Milena, was not able to finish due to an unfortunate dismasting caused by a broken backstay: the mast fell down and broke in two pieces forcing the crew led by skipper Jacques Anderruthy to motor back to the marina to clear up the chaos on deck. 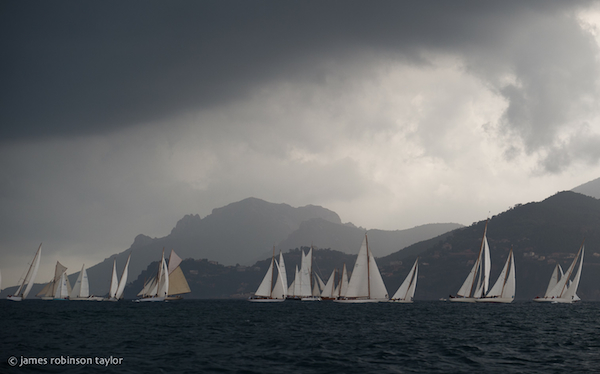 The first boat to cross the line was, once more, charter yacht Shamrock V but on corrected time the win went to Jacques Fauroux’s Dilong Catleya in the Spirit of Tradition class. In the Vintage class Arcadia signs her first victory at the 34thRégates Royales de Cannes while one of the smallest boats racing, Dainty scored a first in the under 15 metres Marconi class, Leonore in the over 15 metre class. Thendara yacht won in the Big Boats division and Bona Fide confirmed her leadership among the gaffers.

Dragons under the clouds…

Today’s races could well represent a turning point for the 43 Dragons competing in Cannes because after the fourth race in a flimsy five knots north-easterly gaps are starting to become important, especially between the two leaders and the rest of the fleet. Actually, after a first windward/leeward leg in an almost steady breeze where the left side was favoured, the air died progressively down on the downwind tack. The fleet split in two groups with the inshore one profiting from a huge wind shift. In a match-racing style finish was the Italian crew of Massimo Buzzi, Tommaso Buzzi and Marco Borzone (Little Hook) to cross in first. They were followed by USA’s Edward Simmons (Grendel) and Germany’s Timann Krackhardt (Hausdraken) while Briton Ivan Bradbury (Blue Haze) finished in third. Reigning champion Giuseppe Duca with French crew Jean-Sébastien Ponce and Guillaume Berenger (Cloud) was fifth, a result that put them on top of the provisional scoreboard as their nearest rivals didn’t score brilliant results today. Yesterday’s leader Soren Pehrsson from Denmark (Blue Lady), Russian Anatoly Loginov (Annapurna) and German Helmut Schmidt (Kleine Brise) finished tenth, thirteenth and twentieth respectively. After the first race the Race Committee sent the crews ashore to avoid an enormous rainstorm that swept any breeze away from the race course. After some waiting, a new southerly managed to get in on the La Napoule bay and shortly before 4 pm, the 43 Dragons went out heading for the fifth race, in some fifteen knots strong southerly. It was Russian flagged Annapurna to get in first, ahead of UK’s Jerboa and Sunflower, thus consolidating her second overall behind Cloud that with a seventh place manages to keep the lead. Still, there are two days left and the weather forecast for Thursday is for sunny skies and a good breeze, the two provisional leaders can’t rest on their laurels…

One date, one class

Exactly like the Régates Royales, firstly held back to 1929 to honour HRH Christian X of Denmark, the Dragon class celebrates its 83th birthday this year. 8,90 metre long, 1,95 metre wide the one-design weighs 1,700 kilos and has an upwind sail area of 27,7 square metres. She was designed by Johan Anker in 1929 and since then more than 3,000 boats have been produced. The Dragon was selected to participated to the Games and was an Olympic class from 1948 to 1972. The class’ champions were the Norwegian Thor Thorvadlsen who won the title in London (1948) and Helsinski (1952), Folke Bohlin from Sweden in Melbourne (1956), Greece’s HRH Constantin II in Rome (1960), danish Ole Berntsen in Tokyo (1964), US’ George Friedrichs in Mexico (1968) and finally Australia’s John Cuneo in Munich (1972).

The Norwegian designer created the boat further to an international competition launched by the Royal Göteborg Yacht Club in 1927 to produce a one design boat that would be relatively cheap and suited for a crew of three. The first 20m2 (as the boat was originally called) was built in 1928 but the class started to become popular on the following year. In 1935 she started to be sailed in Scotland, and in 1935 the soon to become Queen Elizabeth was presented with a Dragon called Bluebottle as a gift. The boat was modified in 1945, the sail area was increased to 27,7 square metres and a spinnaker was added to the sail inventory. A French fleet was created after WWII, with boats racing mainly in Deauville and in Arcachon. Traditional hunting ground for crews from Scandinavia, over the last decades the international racing circuit has been dominated by sailors from Eastern Europe: Russians, Ukranians, former Iugoslavians… yet at the golden age of 68 Danish Poul Richard Hoj Jensen still reamains one of the biggest names in the class.

It seems that the name of the boat was born out of a pronunciation mistake when Johan Anker introduced his design to the International Sailing Federation to get an international class status, an interpreter called it “Draggen” and the Anglo-saxons translated into “Dragon”. The one-design became Olympic class in 1948 for the London Games and took part to the last Olympics in Munich in 1972. In 1970 the class rule opened to aluminium masts and thanks to Borge Borresen’s efforts fibreglass hulls were accepted. In 2012 the class registered 1,391 boats competing on a regular basis to racing events in 29 different countries. Every year some fifty new boats are built, mainly by Vejle Yacht Service (Denmark), Borresen (Denmark), Doomernik Dragons (Holland), Markus Glas (Germany), Petticrows (UK) and Ridgeway Dragons (Australia).