Supermaxis and super sailing yachts: BIG GUNS AT THE READY. With an active ...
Browse News Section

Supermaxis and super sailing yachts: BIG GUNS AT THE READY. With an active racing season well underway, a fleet of top maxi yachts have committed to being in Porto Cervo to compete at the 2010 Maxi Yacht Rolex Cup. The event is a favourite gathering for these competitive and striking sailing craft, which will meet off Sardinia’s spectacular Costa Smeralda from 5 – 11 September.

2010 marks the 21st edition of this annual autumn gathering and, as usual, the international fleet will comprise a mix of the latest launches and those well known on the racing circuit. The regatta features some of the most impressive sailing yachts in the world. The primary limitation on entry is length: minimum rather than maximum – all yachts must be over 18.29-metres (60-feet) in length. This year the Maxi Yacht Rolex Cup forms the final act in the 2010 Rolex IMA Championship series and also includes the inaugural World Championship for the Mini Maxi fleet.

The list of returnees is strong, with a good showing of the gargantuan supermaxis, including the 45-metre Saudade (MLT) and Salperton (CAY), and Hasso Plattner’s 44-metre Visione (GER), as well as the stunning classic-looking 42-metre J-Class, Ranger.

Crichton, who has previously found success with a string of larger maxis, is a strong contender for the Mini Maxi Rolex World Championship. He will be helming the Reichel/Pugh-designed 21.8-metre Shockwave, with Stu Ballantyne and Ian Moore in the afterguard. Crichton says, “we think that this will be a very close event with any of five boats able to win. I would pick, though, Rán as our biggest challenger. Our crew is largely unchanged from the Giraglia Rolex Cup and that result shows what we can achieve (1st IRC overall; 1st Mini Maxi Racing). This event is one that I always look forward to because the racing conditions in Porto Cervo are, quite simply, some of the best and most challenging in the world.”

The Mini Maxi Rolex Worlds are open to all maxi boats between 18.29-metres (60-feet) and 24.08-metres (79-feet) in length, but for the World Championship Trophy itself there is a strict owner/driver requirement. Zennstrom’s Rán has been on an impressive roll over the past year with a division win in the 2009 Rolex Sydney Hobart Race, overall win at the 2010 Onion Patch Series and a class win in the 2010 Newport Bermuda Race. Zennstrom, who will be helming Rán, is looking forward to some very close racing in his class, “this is the one regatta where the Mini Maxi fleet comes together and the one everyone is well prepared for and wants to win. All boats have become more competitive this year, so anyone can win. Porto Cervo is one of the best sailing venues in Europe so it should be a very exciting week.” 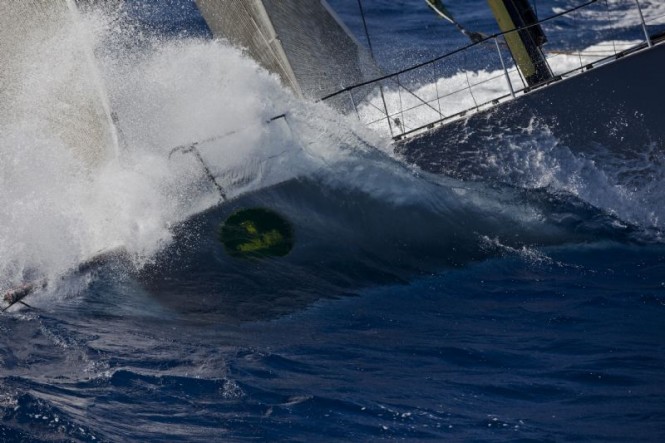 Along the way, Rán and her crew have been trading wins with another aspirant for the world title, Hap Fauth’s Bella Mente (USA), which has enjoyed a skilful season with class wins at Key West Race Week, New York Yacht Club Annual Regatta; 2nd in class in the Newport Bermuda Race, and an Overall Team win in the Onion Patch Series. The top boats in the Mini Maxi fleet are constantly being tweaked to find that extra bit of speed. Bella Mente is no exception. She underwent modifications in 2009, changing the hull shape and reducing displacement, dramatically transforming the potential of the 21-metre sloop.
The process of refinement is ongoing and, last winter, Bella Mente’s chain plates were moved and the spreaders enlarged. Fauth acknowledges this attention to detail is part of what it takes to stay ahead, “it’s an impressive international fleet. Shockwave, Alegre (GBR), Rán, and Bella Mente are very closely matched speed- and rating-wise. We have a rivalry with all of them — there are a lot of very competitive, extraordinary, highly skilled sailors involved. It’s always a privilege to sail with this fleet.”
Another American racing Mini Maxi is Titan XV, the 22.90-metre (75-foot) Reichel/Pugh design launched last year by Tom Hill. Bill Koch, winner of the 1992 America’s Cup, has chartered Titan XV for this regatta. Koch is no stranger to the Maxi class, but it has been 20 years since his revolutionary Matador 2 broke onto the scene winning all races she entered, including the Maxi Worlds in 1990 (a series contested in Newport, Miami, and the US Virgin Islands.) and 1991 (Saint-Tropez and Porto Cervo). Koch will be helming Titan XV with New Zealander Gavin Brady calling tactics and some of Koch’s America’s Cup teammates as crew.

Until recently, Koch had been competing in the 12-Metre class circuit with KZ7/Kiwi Magic, but eventually tired of the racing. At the time Koch was thinking, “maybe I’ll just get out of sailing and spend my time on my ranch with my kids. But, each time I get on the water I find I love it. So, when Peter (Grubb, project manager for Koch), suggested I might try one of the mini maxis because they’re fun and they go fast, I said ‘I’ll give it a try and charter a boat. And if I really like it, I’ll buy one.’ It’ll be fun and to have my crew back from the America’s Cup and maxis keeps the friendships going.”

Each year the Mini Maxi category continues to gain in numbers and level of competition. Once again this type of maxi will comprise half of the 44-boat fleet currently entered at the Maxi Yacht Rolex Cup. Not all are stripped out racing machines. One newcomer is Alessandro Rombelli’s 21-metre Judel Vroljk-designed Baltic 65, launched this year. Stig (ITA) was conceived with both racing and cruising in mind. It has a full interior and a telescopic lifting keel that cleverly does not influence or limit the cabin arrangements. Rombelli is more usually seen racing something smaller, in the Melges 20 circuit. For this event, he will be sailing with Lorenzo Bressani on board as tactician, “we put a lot of effort in the thinking and designing of Stig and it will be a pleasure to see it participating among some very fast and beautiful boats.” 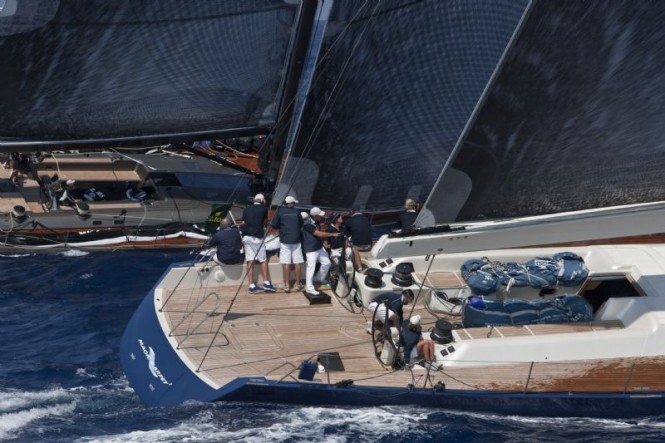 Elsewhere in the Maxi Yacht Rolex Cup fleet, there are plenty of yachts to watch out for. The Adrian Konyendyk designed and McConaghy of Sydney built 24.5-metre (80-foot) sloop-rigged Singularity (GBR), launched in January this year, arrived in the Mediterranean in mid-June. Volvo Ocean Race veteran, Bouwe Bekking is the racing skipper/helmsman. According to Bekking, “Singularity is as close to a racing yacht with a full cruising interior as you can get. She was built with speed in mind and one of the key requisites throughout the design and build process was to find optimum weight-reducing solutions, but without completely compromising the ability to cruise.” With a Design Unlimited interior proving her luxury credentials, Singularity will certainly make a mark. 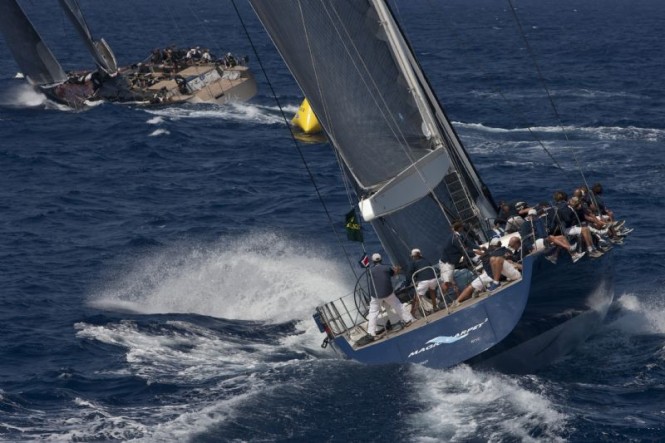 The Wally class will be well represented and includes Irvine Laidlaw’s Wally 82 Highland Fling (MON), launched in 2009 and making her debut at the Maxi Yacht Rolex Cup. Lindsay Owen Jones’ Magic Carpet 2 (GBR) is back for another tilt at the title he has won three times, whilst the 100-footers, Y3K and Dark Shadow (GBR) are joined by Andrea Recordati’s brand-new Indio (ITA).

The Maxi Yacht Rolex Cup 2010, organised by the Yacht Club Costa Smeralda takes place from 5 to 11 September. Racing commences on Monday, 6 September and concludes on Saturday, 11 September. Yacht Club Costa Smeralda, along with title sponsor Rolex, will provide a lavish array of first class social events each evening that will include the International Maxi Association Dinner, Rolex Crew Party, Rolex Gala Dinner, and Saturday’s final Prize giving Ceremony, where the Maxi Yacht Rolex Cups and Rolex timepieces will be awarded to the overall winner of each Division.

From the most luxurious, the most traditional, to the most advanced monohulls afloat today, the Maxi Yacht Rolex Cup is nothing if not an astonishing line-up of sail power.
Yacht Club Costa Smeralda
Via della Marina, 07020 Porto Cervo (SS), Italy
T: +39 0789 902200 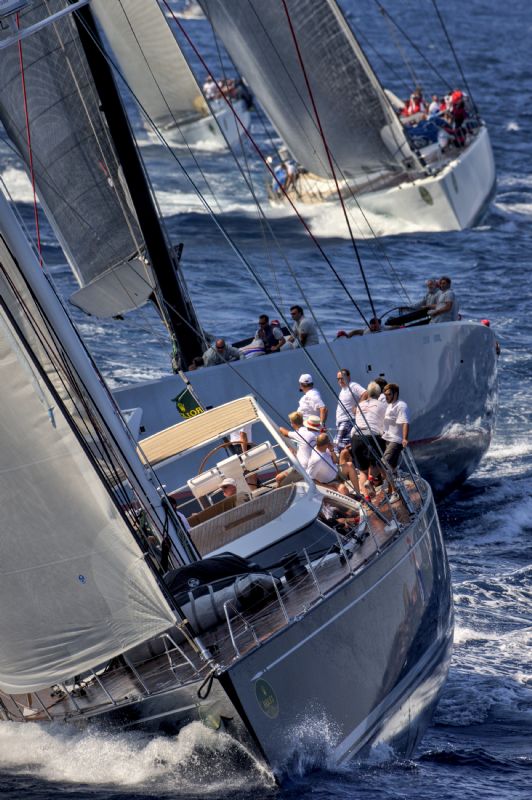 The fleet - Photo by Carlo Borlenghi 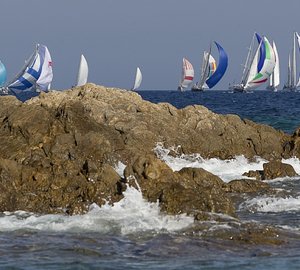 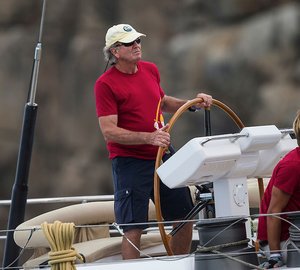