Although a bit late, the breeze eventually set in on the Bay of Cannes on the ...
Browse News Section

Although a bit late, the breeze eventually set in on the Bay of Cannes on the opening day of the Régates Royales – Trophée Panerai and the racing fleet was pleased by the ideal conditions for the first skirmishes. The Classics and the Broad One Designs finished one race, while the Dragons had two. 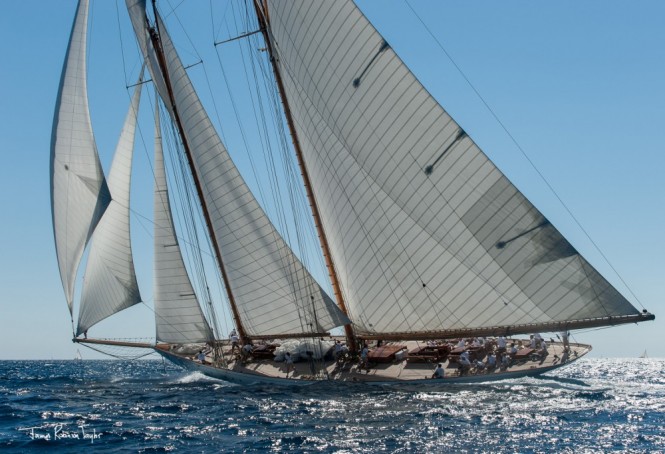 “I’ve rarely seen such a show on the water. It was a bit hot at the mark roundings with so many different boats, but we had a great day” declared offshore single-handed star sailor Florence Arthaud, who’s racing on board Sonda, a French Bermudan sloop from 1951. “We’ve made our tactics not so much based on the course but on the competitors, because if you happen to be to the leeward of Elena that has some 1,000 square metres of sail area, you need to be prepared to deal with it. I took the helm after the first windward mark, even if generally I let the owner steer at the start, which is always a bit tricky with so many boats on the line.” 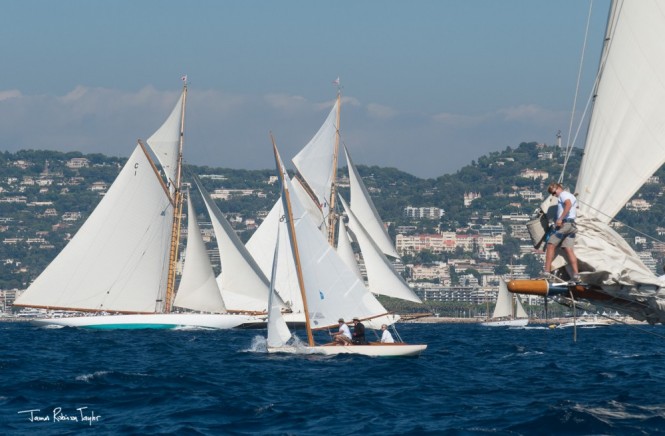 Confronted with these giants, smaller boats like the Wianno Senior struggle to find clean air on a very crowded and mixed race course. “We made a few mistakes, but hopefully we are going to get better. We were second to last at the start, just in front of the big boats, and with our tiny 7,6 metre boat when they roll us we feel very small. We had to be very cautious, but it was really fun.” said Yula de Sambuy, skipper of Wianno, the replica of the very first boat owned by US president John Fitzgerald Kennedy.

Conditions in the Bay of Cannes proved to be almost to the limit for the Broad One Design Class, more at ease on their familiar protected waters. “The conditions were pretty tough today. The Broad One Design is a boat that thrives in choppy waters, but it was almost un-sailable for us today. Unfortunately, one of our boats dismasted”. said Guillemot’s skipper Stuart Rix. Despite the difficult conditions the BODs managed to complete one race that was won by Mark Duffield’s Moorhen with a slight margin on Ken Clabburn’s Flittermouse, that shortly after was dismasted. Daniela, the only French-flagged BOD, skippered by Roger Quenet, scored a fourth.

The Dragons, faithful to their reputation, were the only class to wind up two races both sailed in pretty tricky conditions, debuting at the Régates in the best possible way. Soaking wet but happy, the 36 crews made it back to the Vieux Port of Cannes with one goal set in their minds: climbing back on the general scoreboard tomorrow. After two races it’s Martin Payne on Bear to be on top, thanks to a very consistent opening day (3,2). With more races scheduled for tomorrow it will be imperative for some of the more accredited teams to bounce back. Russian title holder Anatoly Loginov on Annapurna, who had a disastrous first race finishing 27th , made up for the lost terrain on the second one with a win and is currently 8th, 23 points shy of the leader.

Tomorrow, Wednesday, the weather forecast is set for calmer conditions with a SSW wind that should not exceed ten knots. 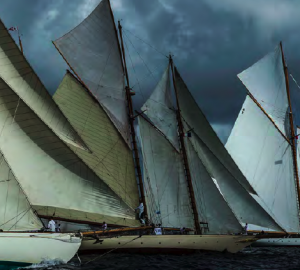 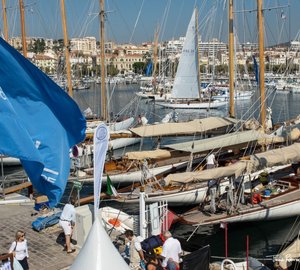