21 days after the start of the 1st solar boat expedition in Monaco, the MS ...
Browse News Section

21 days after the start of the 1st solar boat expedition in Monaco, the MS TÛRANOR PlanetSolar today has reached the Canary Islands. After stormy weather in the Mediterranean Sea the boat has advanced quite fast, reaching Las Palmas today in the early afternoon. MS TÛRANOR PlanetSolar stay on Gran Canaria is planned till Friday. The stopover will also be used for maintenance.

After crossing the Strait of Gibraltar the solar catamaran has left the Mediterranean to continue its trip in the Atlantic Ocean. “We had to overcome some difficult currents, but our batteries were well loaded for the necessary propulsion and safe manoeuvres,” Captain Patrick Marchesseau explains. “We are very happy about the behaviour of the boat under difficult conditions.”

On the next leg of its journey MS TÛRANOR PlanetSolar catamaran will further cross the Atlantic. The current routing around the globe (subject to favourable weather and nautical conditions) foresees stopovers in several metropoles. In Miami, Cancun, San Francisco, Sydney, Singapore, Abu Dhabi and Monaco, the project PlanetSolar will inform the public about the importance of sustainability and renewable energies.

Based on favourable weather forecasts, the boat’s start has been rescheduled from spring 2011 to Autumn 2010.

With this 1st solar boat expedition around the world, the project founders and initiators draw the public attention to the concurrent possibilities of regenerative energies and its implications on environmental protection.

The six crew members are planning to circumnavigate the world by boat solely powered by solar energy. The boat will be navigating under Swiss flag, and the project enjoys the full support of the Swiss government.

The leading-edge solar catamaran (without flaps) boosts 31m in length, 16m in width, and approximately 540 square meters of solar panels as the solar generator. The specially developed energy storage should permit the boat to move for approximately 3 days and nights without sunlight.

The MS TÛRANOR PlanetSolar catamaran was designed by the extraordinary designer and constructor Craig Loomes of New Zealand and was built by high-performance yacht builder Knierim, based in Kiel (Germany). 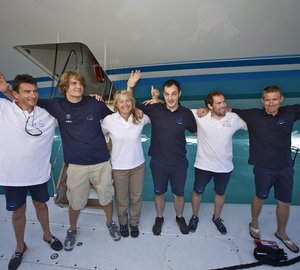 TÛRANOR PlanetSolar Catamaran on her way to Atlantic Ocean 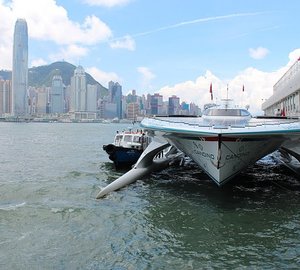 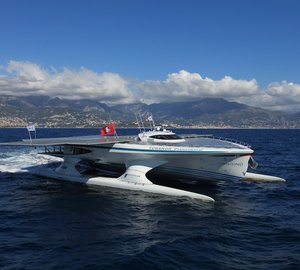