On Friday the 6th of September Emirates Team New Zealand has launched its ...
Browse News Section

On Friday the 6th of September Emirates Team New Zealand has launched its mono-hull racing boat and named it TE AIHE – the Maori word for dolphin – for the 36th America’s Cup to be held in 2021. 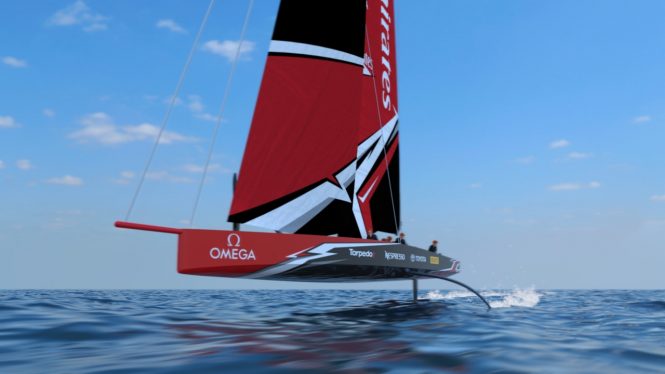 The launch took place in front of the Emirates Team New Zealand base in the Viaduct Basin, Auckland, and the ceremony was attended by New Zealand Prime Minister Jacinda Adern, sponsors, suppliers, the team and their families and the general public. At 7.35 in the morning, the boat was christened by Marcus Gerbich, a member of the Motor Neuron Disease Association which is Emirates Team New Zealand’s official charity.

The aerodynamic design has an arrow-head appearance and is constructed with two deep cockpits designed to increase efficiency in the water and while airborne. The eye-catching red and black hull is sure to stand out as it races through the courses set in the Hauraki Gulf east of Auckland.

The AC75 is designed to strict regulations to ensure fair competition and has a length of 20.7m/67.9ft with a bowsprit of 2m/6.5ft, and a maximum beam of 5m/16.4ft. The total weight does not exceed 6.5T. Simulations have suggested that the new racer could beat the previous catamaran hull by six minutes and exceed the 47.2 knots it achieved to reach more than 50 knots.

“It’s extremely exciting, you really do feel like you are part of maritime history but also America’s Cup and sailing in general,” Glen Ashby commented.

Already the design and engineering team are looking to make improvements for the second hull, which will be the one to defend the Auld Mug on the day.

TE AIHE is the first AC75 racer to be launched by one of the five competing teams: INEOS Team UK, American Magic, Stars + Stripes USA and the Challenger of Record, Luna Rossa of Italy, have yet to launch their boats. 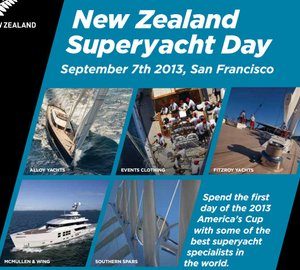 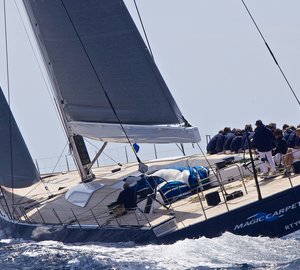