A year of significant milestones for Riviera Yachts

The excitement is undoubtedly building heading into 2015 as Riviera caps off a ...
Browse News Section

A year of significant milestones for Riviera Yachts

The excitement is undoubtedly building heading into 2015 as Riviera caps off a year of important milestones, comprising the announcement of the brand new motor yacht Riviera 77 Enclosed Flybridge. Set for her world premiere at the Dubai International Boast Show 3-7 March 2015, luxury yacht Riviera 77 Enclosed Flybridge hit the water at the home of Riviera at Coomera on Australia’s Gold Coast during a special ceremony, which took place this week and was personally attended by the vessel’s very impressed Middle East-based owners.

Riviera’s Middle East and North Africa dealer will host the world premiere of the 77 Enclosed Flybridge at the Dubai International Boat Show from 3-7 March 2015, taking centre stage at the SF Yachts display.

SF Yachts dealer principal Franceso Pitea also plans to take the 77 Enclosed Flybridge yacht – whose nomenclature is based on the hull moulded length – for an extensive tour of the Middle East to showcase to customers the skill and craftsmanship of Australia’s highly regarded Riviera.

“We are very excited,” he said, adding that there has already a signed contract for a second 77 for a Middle East-based owner due for delivery mid-year.

Another 2014 significant achievement for Riviera is the growing success of the sporty and adventurous SUV collection of Riviera Australia crossover yachts, now comprising three models – the 445, 565 and the new 515 SUV which was launched this year in May.

The adventurous Riviera SUV series is the perfect pairing of two legendary designs, each with its own formidable pedigree. The crossover SUV series combines the high-performance, blue-water cruising and fish-raising abilities of the classic Riviera Flybridge collection, and the single-level, leisurely entertaining features of the luxurious Sport Yacht design.

Riviera owner and chairman Rodney Longhurst said that many owners are saying it’s a lot like having two boats … in one!

“The growing SUV collection has proven immensely popular since we launched the collection with the world premiere of Riviera’s 5000th boat – a 445 – a little more than 18 months ago,” he said.

“In fact we have now sold 56 yachts from the Riviera SUV collection and we are thoroughly excited with the way this collection is being embraced by boating aficionados worldwide.”

The versatility of the 565 in particular impressed the esteemed judges of the Active Interest Media (AIM) Marine Group Editor’s Choice Awards at Fort Lauderdale International Boat Show, where the 565 was acknowledged as the ‘best of the best’ in its class with Best Motoryacht honors for vessels ranging from 50-59 feet.

The year 2014 also witnessed the world premiere of the stylish and sophisticated 6000 Sport Yacht at Sydney International Boat Show in August, and there have now been eight confirmed sales of this widely acclaimed, high-performance yacht that is akin to a six-star floating resort.

“The 6000, with her full-beam master stateroom, is supremely comfortable with clever alfresco lifestyle concepts, ultramodern technology and palatial appointments and boasts an attention to every detail that confirms she is indeed a world-class Riviera,” said Mr Longhurst.

“The success of the Belize Motoryachts range is also continuing to grow internationally as we continue to meet the global affection for high-end, classically inspired motor yachts,” he said.

“The Belize 54 Daybridge made her European premiere in 2014 and we were very pleased that she managed to raise quite a few eyebrows, being named as one of three finalists for the ‘highest achievement’ category for vessels her size in Lux Media’s World Yachts Trophies at the Cannes International Yachting Festival.”

The World Yachts Trophies judges said the Belize 54 ‘made herself known from the very moment she arrived’ for her European premiere at Cannes, adding she is the ‘epitome of the flybridge boat’ and praising her sea-keeping abilities.

“In short, it is hard not to be ecstatic about the Belize 54,” the awards ceremony heard.

Mr Longhurst said that the official opening of the Gold Coast TAFE’s Marine Training Centre in March at the Riviera facility at Coomera is also significant, together with the re-launch of the award-winning school-based apprenticeship program, where students are now undertaking their theoretical and hands-on training to become master craftsmen of the future for our industry.

And then in May, the 3rd annual Riviera Festival of Boating was held with record numbers of people attending the world-class Coomera facility for practical knowledge and skills development to help them achieve ‘the ultimate boating experience’, and also to come together as members of the global Riviera family for fun social events.

“Riviera is continuing to increase its international presence by further expanding its dealer network with the appointment of new US regional dealers in Grande Yachts International with multiple locations on the east coast and Richard Boland Yachts on the west coast,” said Mr Longhurst

“It certainly has been a year worth celebrating and now, Riviera’s 430-strong team is looking forward to an even brighter 2015,” he said.

“At Riviera, we are encouraged by the improving market conditions not just in Australia but also in the Middle East, Americas, Singapore and New Zealand.

“Our forward order position is strong heading into the New Year, with some specific models sold out until late 2015.” 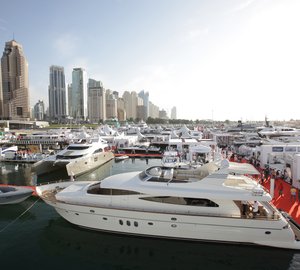 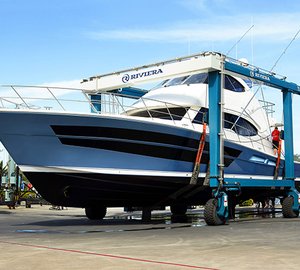 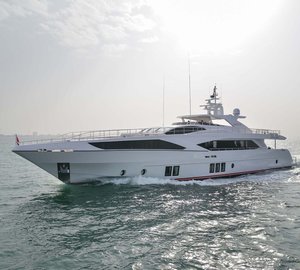 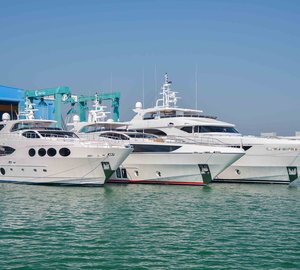