Newport, R.I. USA (July 6, 2011) – In the last 24 hours, the arrival of big breeze and sea state for the fleet in the Transatlantic Race 2011 has seen boat speeds whipped into near record-breaking pace.  Rambler 100 has just recorded a 12-hour run of 288.8 nautical miles, and, with the breeze building, a new world record is a definite possibility.  By comparison, the standing 24-hour monohull world record was set by the Volvo 70, Ericsson 4, at 596.6 nautical miles in October of 2008. 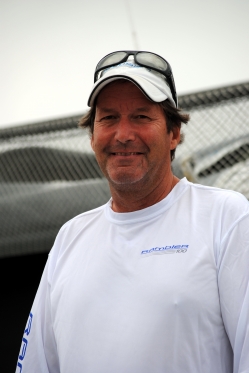 “Some awesome sailing out here,” said Peter Isler (San Diego, Calif.), navigator for Rambler 100.  “Down below its like riding in a subway car, hurtling along at full speed.  Up on deck it’s like being on … well, one of the world’s fastest monohulls in big breeze just sending it.  No more smooth seas, no more cruise-y ride, it’s all on now and the boys (and girl) on Rambler 100 are loving it.  It is very wet everywhere… especially on deck where visibility is only a few dozen yards in fog.”

The second boat on the water in IRC Class One is PUMA’s Mar Mostro, this is the first time the latest version of the Volvo Ocean Race yacht has raced and the ‘sea monster’ is an absolute flier, having recorded a boat speed of 28 knots today.

“Right now, we are doing 25 knots,” said Ken Read (Newport, R.I.) by satellite phone. “We are really delighted with the boat’s performance and a lot of credit should go to the shore crew who has done as good a job as the sailing team.  While we have literally been heading straight for England since we left Nantucket Shoals, there is an area of light winds up ahead.  But right now, we are sailing really fast and enjoying the ride.”

On sailing yacht ICAP Leopard, skipper Clarke Murphy (New York, N.Y.) is having the time of his life:

“This cat can run!  Leopard is aptly named this afternoon as she blast reaches, scampering across the North Atlantic at 25 knots of boat speeed.  She is all speed and jumping through and across the waves like her namesake cat on land.  Though foggy, the boat is performing and the ride is a thrill.  Like a 100’ foot kayak flying through rapids.  The day started out gray as we hit the Labrador Current and the fogbanks settled in with little visibility, though the breeze held.  But for several hours it was torrential, torrential rain as we tested the foulies and seals on our boots.  Fairly quiet on deck at that point!!  The rain abated and as predicted the breeze built a knot per hour to the current consistent 25 knots.  Everyone who is on deck perches in the stern quarter, egging on the helmsman and the speedo with bravado and an occasional hoot as we surpass the watch before.”

In the Open Class, Phaedo, the Gunboat 66, has enjoyed the best of the duel with superyacht Maltese Falcon thus far and are still some miles ahead.  However, the rising seas and extra breeze is propelling the 298’ Perini Navi at some pace and they are most definitely closing the gap. 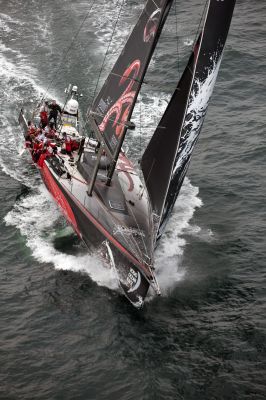 In IRC Two, the yachts are also showing some ballistic pace.  Jazz, skippered by Nigel King (Lymington, U.K.), is still the class leader on the water.  However, Varuna, driven by Jens Kellinghusen (Hamburg, Germany), is now only 19 miles astern and probably leading the class after time correction.

“As I am sitting (working) on the laptop the boat lifts out of a wave,” said Kellinghusen via satellite link of the thrilling ride.  “Check the speedo.. 22…24…25,8…29 knots!  This is what we came for; Varuna is alive and the boys are loving it.  Everybody is on deck, just the helmsmen sleep every hour to be able to drive our grey lady with the concentration she needs.  The boys are working hard to keep up the speed.  A great team effort.”

Huntingdon Sheldon (Shelburne, Vt.), skipper of Zaraffa, is still way out in front in IRC Class Three and could well be a contender for the overall winner.  The Reichel Pugh 65 turned south of the rhumb line today and is currently in a transition zone between two weather systems but should get into fresh pressure before tomorrow.  The next weather system could provide near gale-force conditions and Zaraffa could ride the system all the way to the finish.  If they do, the Canadian-born skipper could well be in line to win his second Transatlantic Race, on corrected time.

In IRC Class Four, Carina, skippered by Rives Potts, Jr. (Essex, Conn.) is no longer the closest boat to the finish.  Zaraffa has overtaken Carina and many more are sure to follow.  Carina, however, is very much the favorite to win the class.  The crew on Carina has now been at sea for over 10 days and apart from wildlife nothing else will have existed outside the 48’ boat, save miles and miles of ocean.  Onboard is Dirk Johnson, Jr., who, at 16 years of age, is the youngest sailor in the race.  Also onboard is his father, Dirk Johnson, Sr., an experienced offshore sailor who will no doubt be teaching his son about life on the ocean. 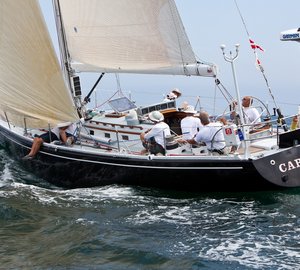 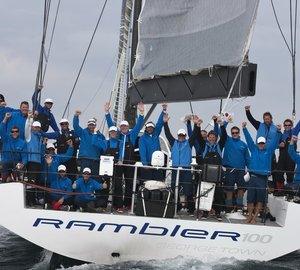