Chris Draper, helmsman of Luna Rossa Challenge (Italy) said that his team could sail “much, much better” than it did today. However it was still good enough to achieve a 2-0 lead in the semifinal round of the Louis Vuitton Cup, the America’s Cup Challenger Series.

Luna Rossa defeated Artemis Racing by 2 minutes and 6 seconds today in west/southwesterly winds that averaged 11 knots. Luna Rossa tactician Francesco Bruni said the conditions were probably the lightest the team has experienced in San Francisco, and the result was a slow race. Luna Rossa  yacht completed the 15.4-nautical-mile course in 54 minutes and 26 seconds at an average speed just under 22 knots, pedestrian for the AC72.

“Our communication on board was pretty good. It was quieter than yesterday because it was a lot lighter than yesterday, a lot,” said Bruni. “It was very shifty, and I think in those conditions it’s very hard to keep everybody cool. You’re going to stretch and the other team is going to catch up. I think we did a very good job of keeping the boat nice and calm even in tough moments when we were losing seconds. I’m proud of the job we did today in very difficult conditions, probably the most difficult have seen in San Francisco so far.”

Today was just the second race and 10th day that Artemis Racing yacht has spent sailing its second AC72. Yesterday the team lost by 2 minutes in a spirited performance.

Sailing yacht Artemis Racing struggled in the lighter winds and couldn’t get foil-borne as easily as Race 1. Luna Rossa popped up onto a foil at the first reach mark and rolled over the top of Artemis Racing and into the lead.

“Again, we had another great start and were happy taking control and leading across the first reach,” said Outteridge. “They got some pressure from the top and rolled over us in the bear away. From there down run it was evident they could foil in less wind than we could, so we had to be patient and wait for the boat to get to speed.”

Artemis Racing made a nice comeback on the second upwind leg, getting out of the tide behind Alcatraz Island and then finding a nice shift along the shoreline of the city front. The team whittled Luna Rossa’s advantage by 59 seconds on the leg, but Luna Rossa gained 55 seconds on the next downwind leg.

“Today was really frustrating. We just need more time in the boat,” said Outteridge. “It was a tricky, puffy day today. It was the hardest day to sail this boat, even though it wasn’t that windy. We’ll do some training and get a bit better for the races to come.”

Tomorrow is an off day in the Louis Vuitton Cup semifinals and Luna Rossa has said it will spend the day doing maintenance while Artemis Racing has a plan to practice.

Race 3 of the semifinal round is scheduled for Friday at 1:15 pm PT. 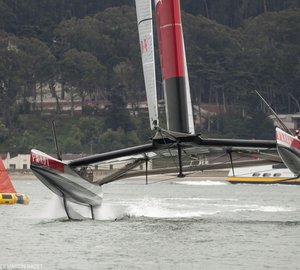 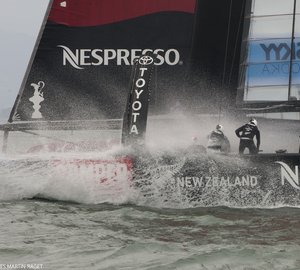