There are at least five teams in contention for the podium at ...
Browse News Section

There are at least five teams in contention for the podium at tomorrow’s finale of the Act 1 of the Extreme Sailing Series, with Groupe Edmond de Rotschchild leading and yacht Oman Air just one point behind … 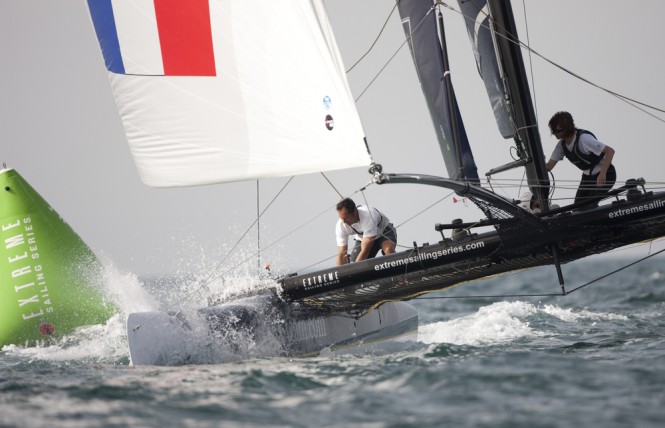 The penultimate day of the Extreme Sailing Series, Act 1 in Muscat, Oman saw the wind speed ratchet up a few knots, as did the competition. The intense head to head between sailing yacht Groupe Edmond de Rothschild and the impressive new team on Oman Air continued unabated and, once again, only 1 point separates these two teams going into the final day of Act 1, in favour of the French favourites.

“Radical!” said Morgan Larson back on the dockside. “It was an entertaining day definitely. We knew we might struggle a bit when the breeze came up… Today has tightened the field up a lot with Red Bull, GAC Pindar and The Wave right on our heels…” There could not be two more contrasting skippers in the laid-back, stocky, surf-loving Californian and the intense, focused, slightly built Pierre Pennec. It’s going to make for an outstanding final day tomorrow with three other teams in the hunt for the podium snapping at their heels. All the action will be streamed live online, starting earlier than usual at 1030GMT.

The Extreme 40 racing started in around 9 knots of wind that increased to 12 then 14 knots delivering plenty of hull-flying action and close combat at the top mark. Reaching start, 100m sprint to the top mark, 6 Extreme 40s screaming into the mark got the adrenalin pumping for the sailors and spectators. It made the racing full-on for the 8 Extreme 40 teams on the short, sharp stadium race courses with reaching starts that caught out the new and less experienced skippers where timing the fast approach to the start line demands accuracy and skill, punishing those who get it wrong. The tight stadium action resulted in numerous penalties and a few scrapes, whilst Alinghi found themselves entangled with the race mark on two occasions. 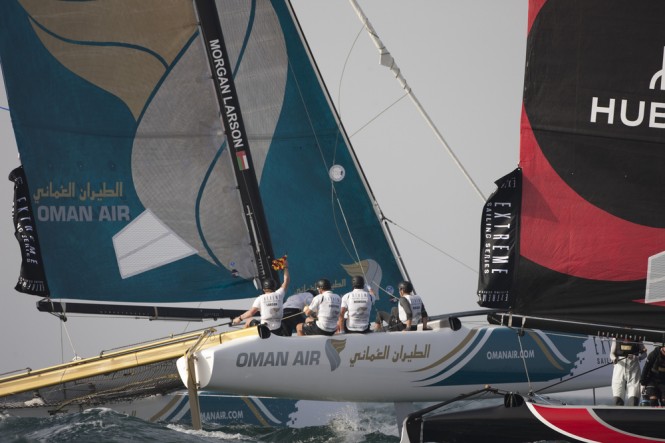 Getting a taste of the Extreme 40 action was Omani footballer, Saad al-Mukhaini, who was celebrating his team’s win against Thailand the night before to continue on their World Cup qualifying journey. Al-Mukhaini, who is taking part in the Arsenal selection trials, went racing with Oman Air and watching the racing was His Highness Sayyid Tariq bin Shabib Al Said, of the Sultanate of Oman royal family.

Pierre Pennec’s team scored the first win of the day but could only claim one more race win out of the 8 races today, as the other teams jostled for places at the front. Loick Peyron’s team on Zoulou won the second race, Alinghi the third, then GAC Pindar who are showing bursts of fantastic form in their second season of racing. In the next race GAC Pindar crewman Mark Bulkeley suffered a minor head injury, diverting the crew’s attention as Pennec claimed the win: “Coming in for a hoist, the spinnaker gets thrown round the shroud to keep it out of the way,” explained Bulkeley. “And the furling unit just caught me on the side of the head – there was a bit of blood but nothing too serious.”

With Bulkeley’s head injury attended to the British team bounced back to win the next race. Leigh McMillan’s team on The Wave, Muscat did enough to maintain their 3rd position on the leaderboard: “We managed to keep it quite clean,” said Brit McMillan. “We only get 1 penalty today – we got too close to Red Bull and took a penalty but that’s what the racing was like today. We’re getting into a good place and we’re hoping to go out tomorrow and finish it off.” Roman Hagara’s Red Bull Sailing Team also managed to hold on to their 4th place ahead of GAC Pindar going into the final day of Act 1 tomorrow. As always, plenty of points to play for and a double-points final race decider. 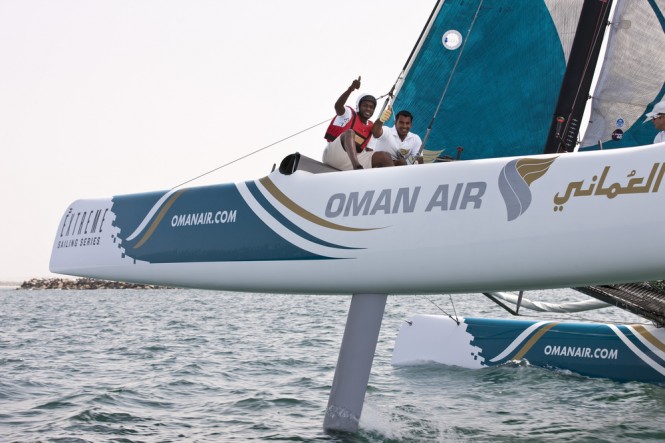 Racing will start an hour earlier than scheduled tomorrow at 0900 GMT (1300 local time) to take advantage of the good winds forecast and the live streaming will start at 1030 GMT so you can follow the action all the way to the end. 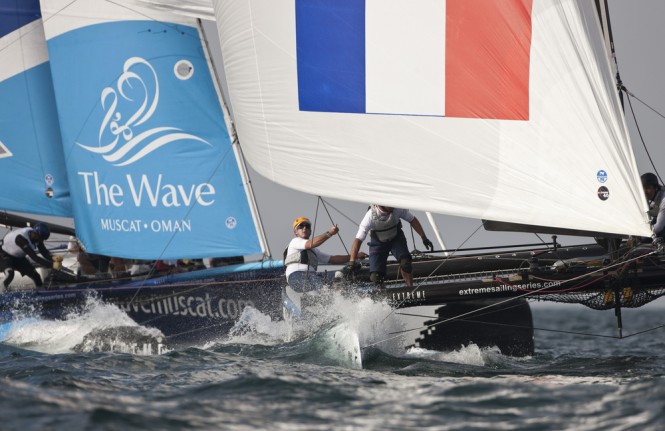 Loick Peyron at the helm of ZouLou with The Wave, Muscat chasing hard - Credit Lloyds Images

Quotes from the sailors:

Morgan Larson, skipper, Oman Air: “Radical! It was an entertaining day definitely. We knew we might struggle a bit when the breeze came up with me and my timing, mainly it was the starting as I didn’t have any training on the reaching starts and I need a lot! I guess when you go out there and do 8 races, you can some practice, and finally in the last race I got it. It’s a challenge, there’s a lot of team pushing hard and it can go either way on the start if you get it one second wrong you get shot out the back or over early. Today has tightened the field up a lot with Red Bull and Pindar, and The Wave who had an awesome day, are right on our heels and anyone can still win this one.”

Tanguy Cariou, tactician, Alinghi: “It was tough and too many marks too round! It was the first ‘real’ Extreme stadium day as yesterday was quite light and longer races. Today was a lot more intense with the course and the reaching starts. From the start full-speed on 16-17 knots boat speed and it was a tough day for us. As a team we have so many things to learn to be efficient.”

Leigh McMillan, skipper, The Wave, Muscat: “The firsts reach was only about 100m long so we always came to the first mark, 3 or 4 boats wide, gennakers unfurling, lots of close contact manoeuvres, full on! We managed to keep it quite clean, only get 1 penalty today – we got to close to Red Bull and took a penalty but that’s what the racing was like today. We’re getting into a good place and we’re hoping to go out tomorrow and finish it off.”

Mark Bulkeley, mainsheet, GAC Pindar: “Coming in for a hoist, the spinnaker gets thrown round the shroud to keep it out of the way and the furling unit just caught me on the side of the head – there was a bit of blood but nothing too serious. We had four good races and four not so good races today – it was a hard race course to get back in if you got it wrong.” 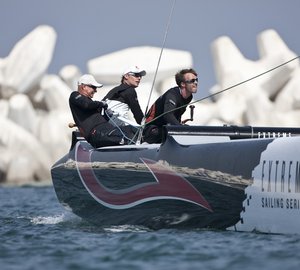 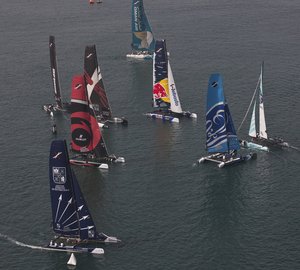 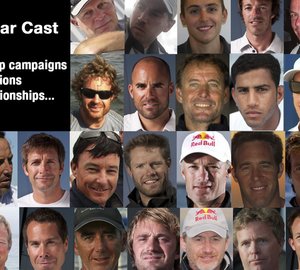 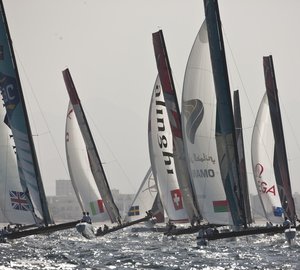