Overnight, on the Day 7 of the Clipper 11-12 Round the World Yacht Race, when ...
Browse News Section

Overnight, on the Day 7 of the Clipper 11-12 Round the World Yacht Race, when the leading team decided to forego possible Scoring Gate points in favour of an inshore course as well as stronger winds, the Gold Coast Australia team has taken the lead. 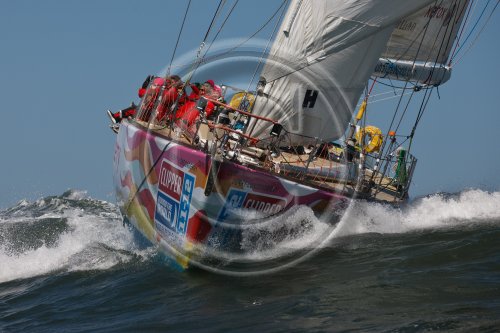 With the ten teams now one week into the 5,500-mile leg from California to New York via the Panama Canal, Richard Hewson and his team are hoping their decision will pay dividends in the long term as they close in on the finish line of Race 10.

Skipper of Gold Coast Australia, Richard Hewson, said his team opted for a “bold move” yesterday to sail closer to the shore than any other yacht in the fleet. “The crew worked well today and sailed the boat very well in the light conditions trying to improve our position on the leader board,” he said. For the moment, the hard work has paid off and the team has now moved into pole position.

Out in front, the team on Gold Coast Australia has been enjoying the abundant sea life in the area. “The wildlife close to the Mexican coast is amazing and today we have seen numerous groups of dolphin, a turtle, a pod of whales, flying fish, squid and schools of large pelagic fish,” Richard said.

Yesterday Richard and his team voted to disregard the Scoring Gate in favour of sailing their own course in order to focus on the bigger picture.

“As we approached the Scoring Gate it appeared to be already full with De Lage Landen, Qingdao and Welcome to Yorkshire all about to cross…It will be interesting to view the results over the next few days to see if our inshore tactics pay off,” Richard added.

Stuart Jackson and his crew on De Lage Landen were the first to reach the Scoring Gate at 22:56:56 UTC last night to claim the maximum three points on offer to the first team to cross the line between 24 N and 113 50 W and 24 N and 113 W.

Welcome to Yorkshire was the second team through the Scoring Gate at 00:07:41 this morning, just over an hour after the Dutch team, to secure two points. Qingdao managed to clinch the remaining point on offer by reaching the Scoring Gate third at 00:29:00.

As the Scoring Gate is not a compulsory mark of the course some teams opted to forego the additional points on offer in order to stay in the narrow corridor of inshore wind in the hope of securing a better overall result.

Despite being pipped to the maximum Scoring Gate points by De Lage Landen, Rupert Dean on Welcome to Yorkshire reports that its been “one of those halcyon days” for his team with blue skies, sunshine, warm weather and pleasant downwind sailing conditions. He reports smiles all round as Welcome to Yorkshire sails on “a magic carpet flat sea”.

The last 48 hours have proved very tense on Welcome to Yorkshire, as the team battled to secure valuable points, and Rupert reports that the added pressure has focused his team no end.

In order to maximise their chances of securing the extra points, the team specialised several roles on board as they approached the Scoring Gate in a close battle with De Lage Landen and Qingdao.

“Pinpoint helming, zealous trimming, perfectly executed gybes and peels of our kites have all made their mark and everyone on board has reason to be proud of their contribution to our success,” Rupert said.

Qingdao’s efforts to reach the Scoring Gate were hampered by damage to the team’s medium weight spinnaker. Skipper Ian Conchie reports that he was called on deck to find the foot of the sail had caught on the pulpit resulting in a five-metre rip across the bottom.

The team quickly got the damaged sail down and hoisted their lightweight, in order to fix the torn sail with Dacron sticky tape.

“We continued to head for the gate but couldn’t quite go fast enough to beat De Lage Landen and Welcome to Yorkshire,” Ian said.

On Geraldton Western Australia, Juan Coetzer and his team just missed out on the Scoring Gate points but they report that they had Qingdao in their sights.

“Well done Qingdao, you have managed this time, but we have a visual on you and my crew is focused,” Juan said. He adds that the light winds have allowed for some maintenance to be carried out and the crew are taking good care of the 68-foot yacht that has become their home as they race 40,000 miles around the world.

For Stuart Jackson and his team on De Lage Landen, crossing the Scoring Gate was “a fairly sedate affair” despite being first and claiming the maximum three points on offer.

The team had little more than five or six knots of boat speed all day, as they gybed their way towards Panama whilst managing to keep challenges from Welcome to Yorkshire and Qingdao at bay.

“The points will be very welcome after our tough race on Leg 6 but now we need to concentrate on maintaining our position and catching those who have sailed a different course around the Scoring Gate,” Stuart said.

New York is another team to sail a course outside the non-compulsory Scoring Gate, and has opted to sail inshore of the rest of the fleet. Currently in second place, behind Gold Coast Australia, Gareth Glover and his team will be hoping that their easterly tactics will keep them at the front of the fleet.

“Being more inshore than the rest of the fleet we sacrificed any chance of any Scoring Gate points, We’re now working on the overall plan to get us a top-three finish,” Gareth said.

“We hope in the next few days that our position closer to land will give us a better chance of more wind than the teams further offshore but it may come down to the luck of the gods who gets the wind,” he added.

Gareth reports that his team has cross-gybed with Visit Finland and has also been joined by a pod of whales, sunfish and dolphins as they head south.

On Visit Finland, Olly Osborne reports that his team has enjoyed a “great day’s sailing” and he reflects that it is hard to believe it is the same ocean that gave the fleet such a battering so recently.

“We were treated to a show of all sorts of marine life as we tracked down the steep contours of the Continental Ledge this afternoon, including a large group of sperm whales which came close up to the boat as we ghosted along beneath our lightweight spinnaker,” Olly said.

“I was concerned that we might hit one at first, but at the last minute they dived beneath us and disappeared with their small calves close by them. Such an encounter with these massive creatures is probably very rare and I am sure it will be one of the highlights of the journey for a lot of us,” Olly said.

Olly is another of the skippers who has opted for the inshore route sacrificing a shot at the extra mid-race points on offer. “We’re hoping that our decision to forego a run at the scoring gate for a more inshore route will pay off, and we’re hoping to make the best use of the coastal winds,” he said.

Singapore and Edinburgh Inspiring Capital are battling to make up ground after dealing with monumental spinnaker wraps.

Flavio Zamboni on Edinburgh Inspiring Capital sais his team has been doing a lot of downwind work including kite peels for the last 24 hours to keep the boat moving at the best possible speed and angle in very light airs. The team passed through the Scoring Gate, but failed to pick up any points as they had all being claimed by the time they reached it.

With more of the same weather forecast over the next few days, Flavio said his team is focused on trying to avoid windless patches.

On Singapore, Ben Bowley and his team spent over ten hours trying to coax down their wrapped kite using the full range of “pulling, tugging, gybing, teasing, swearing, sweating and tears” to try to get the vast sail free of the rigging.

Even four hours of nocturnal rig acrobatics failed to release the monster wrap, but finally the team managed to wrestle the “big white snake” back onto the deck.

“The whole episode has really helped to forge a strong, determined, harmonious and good-humored team out of a crew of two watches. I am immensely impressed with every single person’s efforts over the last 24 hours and feel that as a unit, we are better prepared for overcoming future challenges that are bound to present themselves further down the track,” Ben said.

“We have inevitably lost much ground to our competitors and I had hoped to have been further inshore by this stage of the race but the good news is that we are moving swiftly again in the right direction,” Ben added.

Mark Light and his team on Derry-Londonderry have also experienced a testing 24 hours. This morning Mark summed it up as the team’s “most frustrating day of the race so far”.

Despite lying in a healthy second place yesterday with high hopes of securing Scoring Gate points, the team emerged from Stealth Mode to discover they’d lost the wind in the central patch they occupied while the teams to the west and the east pulled ahead.

“We have sailed well and haven’t done anything wrong but our tactics have proven to be less than satisfactory. We are having to rethink our game plan and concentrate even harder on the job of clawing our way back up the fleet once again,” Mark said.

“Luckily for us, this is something that we are very used to and also very good at. With morale and teamwork very good on board we are still thinking of a successful finish to this race but a little shove in the right direction from Mother Nature would be a great help to us and would also be massively appreciated at this stage in the proceedings!” Mark added. 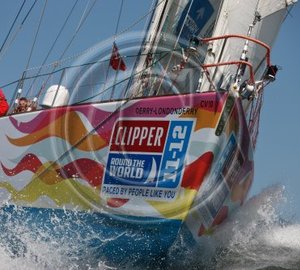 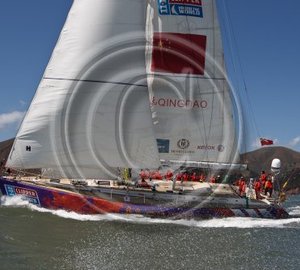