Audi MedCup fleet at the Camper Regatta Barcelona warming up for the Conde de Godó Trophy.

Audi MedCup fleet at the Camper Regatta Barcelona warming up for the Conde de Godó Trophy.

The Camper Regatta – Conde de Godó Trophy – Barcelona, third stage of the Audi MedCup circuit 2010, will take place from July 20 to 25 2010. Teams have been loving the conditions off Barcelona where the Audi MedCup Circuit starts racing for the TP52 Series on Wednesday and the GP42 Series starts Thursday.

From the Vieux Port to the Port Vell, from the Mistral to the Garbi, exactly one month after the 2010 Audi MedCup finished in Marseille, racing begins tomorrow off Barcelona where the atmosphere around the Audi MedCup Circuit village is a mix of great excitement and building anticipation.

The huge urban renewal of Port Vell for the 1992 Olympic Games, at the time one of the most ambitious in Europe, created one of the most iconic waterfront areas in the world. And in mid July it is one of the busiest and most cosmopolitan city spaces around, a natural focal point where visitors and locals congregate, enjoying the cooling sea-breeze respite from the city heat, taking advantage of the open spaces and loving the buzz.

Add all these ingredients together and the Catalan Capital’s Moll de la Fusta is a great place to bring the Audi MedCup Circuit for the first time. “The set up here is simply awesome, a great place to come.” Ed Reynolds, project director of Quantum Racing (USA), volunteered this morning.

The way it looks now pre-regatta, Barcelona might set new standards for the world’s leading regatta circuit. The social programme is busy and includes an opening night party for this Camper Regatta – Conde de Codó Trophy – Barcelona to which nearly 700 people are invited.

The on-board Crew+1 spaces on each race, which allows VIP and media guests a space on board the race boats during competition, have never been in such demand.

The weather forecasts suggest that a maximum complement of races could be possible.

Racing starts for the TP52’s with tomorrow’s official practice race at 1300hrs, as the prelude to points scoring series racing which start Wednesday. The intention is to ensure that as many windward-leeward races as possible are completed. So when the breezes allow, three race days could be the norm and up to 12 races in total could be possible. Today’s final unofficial practice for the TP52’s saw 10 knots of SE’ly breeze.

Official practice race for the GP42 Series is on Wednesday and racing for the five boat fleet begins Thursday. The TP52 Series is back at full strength with 11 boats competing, including the return of Pedro Mendonca’s Portuguese Bigamist 7. Their bronze medal winning tactician Hugo Rocha (POR) lives in Barcelona and is well acquainted with the local winds.

Emirates Team New Zealand, the defending 2009 Audi MedCup Champions, have a lead of 18.5 points after their fourth place overall in Marseille. But behind them there is just 9.5 points between second placed Audi A1 powered by All4One (GER/FRA) and fifth placed TeamOrigin 1851 (GBR), with Quantum Racing (USA), the Marseille Trophy winners lying third and Matador (ARG) fourth.

In the GP42 Series fleet it is Islas Canarias Puerto Calero (ESP) of Jose María Ponce (ESP) which leads overall but the lighter conditions expected here will be closer to the optimum for Laureano Wizner (ESP) and the crew of Iberdrola (ESP), winners in Marseille.

Already thousands of visitors have enjoyed the Audi MedCup Public Village on the Moll de la Fusta and the visitor areas are open free to the public from midday until 2100hrs each day.

Audi MedCup TV is live each day from 1250hrs broadcasting all the action from the race courses supported by key interviews, comment and live commentary in English and Spanish. 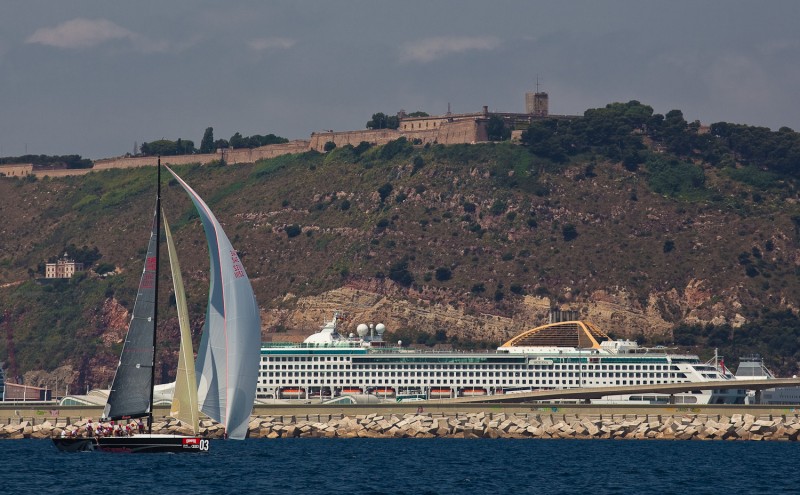 “ It was good for us today, a bit lighter which was good for us because it allowed us to try a few sails and set ups. We are pleased with the way the boat is going, certainly we are now a long way now from where we were when we started out and it is always good to be out on the water trying the racing with the other guys. We were at the right end of the field. This year for us as a team we have gone through more changes as a team than many would in a five year period. Yes, that’s unsettling but we are making the right step each time and it is a good group which we have on the boat now. We are getting there and the boat is radically different to what it was at the start of the season. So we are excited about this event, the boat and the team.”

“Apart from the long distance races in the last two regattas we have been in reasonably good shape and sailed quite well and if we had not had the handling issues we would have done much better, so I think we can win a regatta, but we need to get it right on the day, each day.”

“All through the season it has been hard with all these changes which have taken place, but working with Grant Simmer now is fantastic. He is the kind of guy who is happy to delegate and let all the guys get on with their own areas on the team and all the big decisions we have ever taken as a team we have all been involved in, everyone buys into the decision making process.”

“I’m looking forward to another event where we can get all the racing in. It will be quite light and tricky for the week, light sea-breezes. Our boat seems to be going quite well in the practice and so we are quite happy with it all. It is interesting racing out there. There is no dominant side and there is a lot going on and the weather forecast is quite dynamic. There is not much wind forecast but it is sort of changing every day through the regatta whether it will be from the SE or from the SW, if it will 11 knots or it will be eight knots, these are quite big differences there. And in the lighter stuff all the boats are very even in performance.

“The conditions were tricky today, typical Barcelona I would say. It’s going to be tough racing and the fleet will probably stay close together, so we have to make good starts and get the nice port of the course. The conditions here are going to be much lighter than in the other venues, but this is nothing new. We know Barcelona very well, but still it’s going to be very critical. We have to work on the boat speed, we all know that our boat is not very fast in the light stuff, we have to do constant work. I started sailing with the TP52’s this year and starting in the light breeze is not the same as doing it in the strong ones so I have to do get used to it.”

“Conditions are going to be light, that’s true, and even if they say our boat works better in this wind, the whole fleet is very even, so we’ll see what happens. Our problem is that we don’t work as a team throughout the whole season, that is, we meet once every month for the event, and that’s it, so that makes it kind of difficult to improve and be as synchronized as other boats are.”

“ Today we’ve sailed quite well, we’ve made some changes to the boat after Marseille, we know it’s not the fastest boat in the fleet so we often have to make do with not so good results. The boat has problems in the light wind, for us wind means at least ten or eleven knots; below that we’ve got big problems. Today in the first training race we had ten knots, in the second it’s dropped to seven or eight and we’ve had problems in the top mark already, we seem not to be able to move up from the eighth, ninth or tenth place. It’s a big handicap for this boat. We’ve tried to improve it but I think it works better in the strong winds and there’s not much we can do. We’ve moved the trim a bit to the front and we’ve made the sails a bit deeper for light winds, but the boat was conceived for stronger winds, and we can not say it’s had a great performance in the past years, neither has it now…” 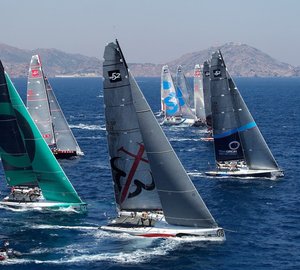