The 127m/416ft Oceanco luxury mega yacht Y721, commissioned by Amazon founder Jeff Bezos left the shed at the Oceanco shipyard in Zwijndrecht this morning, revealing the black steel hull and aluminium superstructure together for the first time.

Designed as a three-masted schooner with a bowsprit, some of the hull was part-assembled at the Zwijnenburg facilities before being moved to Zwijndrecht.

S/Y Y721 is believed to have been commissioned by Amazon founder Jeff Bezos and was sold in 2018. Other details of the build have not yet been released; however, it is rumoured that a support vessel will also accompany Y721 on future adventures.

Final outfitting is expected to take place shortly before S/Y Y721 undergoes sea trials then be delivered to her Owner in 2022. 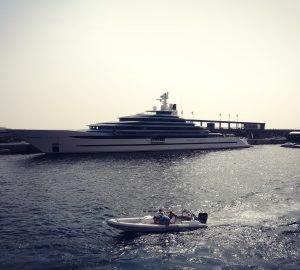