Launched by Mulder Shipyard in July 2014, the brand new Mulder 98 Flybridge superyacht YN 1391 is a beautiful 30,5m full aluminium vessel, superbly penned by Guido De Groot Design. Below are the photos showing the Mulder 98 Flybridge motor yacht YN 1391 on the New Waterway near Hoek van Holland, when coming back from her sea trials in the North Sea, successfully completed yesterday, on October 1, 2014. She was photographed by Kees Torn.

The custom built interior of the new Mulder 98 Flybridge yacht YN 1391 provides lovely and comfortable accommodation in 4 cabins. There is the owner’s stateroom, as well as one VIP suite and two guest cabins, each with its own shower and toilet. In addition, the vessel boasts a magnificent and spacious saloon, with a dining area for eight people.

The 98-foot luxury yacht YN 1391 by Mulder is run by twin Caterpillar C32 engines, with a capacity of 1600 hp each, giving a top speed of 22 knots. The 6,90-meter wide yacht has a fuel capacity of 17,000 litres, providing a transatlantic range of 4,500 nm at a speed of ten knots. Mulder 98 Flybridge YN 1391 is built in accordance with RINA Classification. 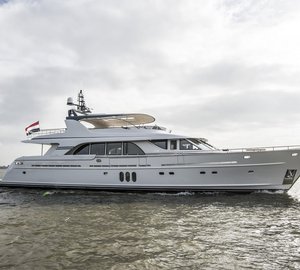 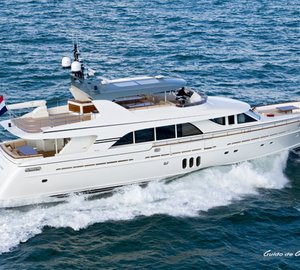 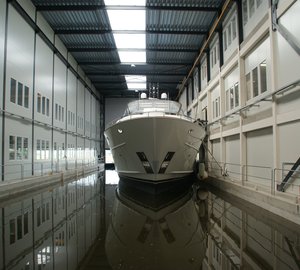