Arctic – one of the world’s most breathtaking places right on the ...
Browse News Section

Arctic – one of the world’s most breathtaking places right on the top of our planet. Discover its gripping scenery with spectacular glaciers and endless ice cap in the luxury of your own ice classed charter expedition yacht LARS. Cruise in the sea full of icebergs and be greeted by whales. Launched in 2012, the luxury motor yacht LARS is currently on her maiden voyage to Spitsbergen. She will remain in the Northern Europe waters afterwards and once she has reached Greenland she will be available for charter at a price from €65,000 to €80,000 per week plus expenses. She will be available from around mid August and in addition to Greenland charters it will also be possible to cruise the Norwegian coast to Tromso as well as further south. 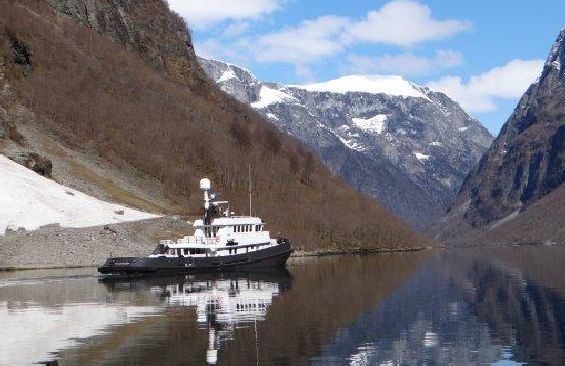 LARS’s history goes back to 1995, when she was designed to become the ultimate tugboat for her original owner. Known as Zeemeeuw, she was built to Bureau Veritas and Norwegian Ice Class by Made Shipyards, featuring a rib every 20 centimetres in the forward part of the vessel as well as a hull constructed of 40 tons of stainless steel. Unfortunately the original owner was unable to have the vessel completed and as a result she was sold to her present owner in 2010. Felix Buytendijk Yacht Design were asked to come up with new ideas and designs in order to convert Zeemeeuw into a beautiful luxury ice class expedition yacht LARS she is today. 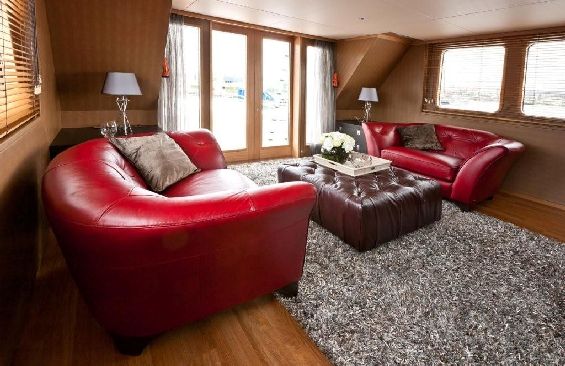 The superyacht LARS provides her charter guests with accommodation in four lovely cabins, including one master stateroom and three guests cabins. Guests and the yacht are looked after by a friendly and professional crew of 5. Some important features of Lars yacht are a pleasant dining area, a fitness area to keep you in shape, a comfortable lounge as well as a saloon. However, the vessel’s main transformation involved  a new swim platform as well as her redesigned superstructure showing off her new spacious sundeck. 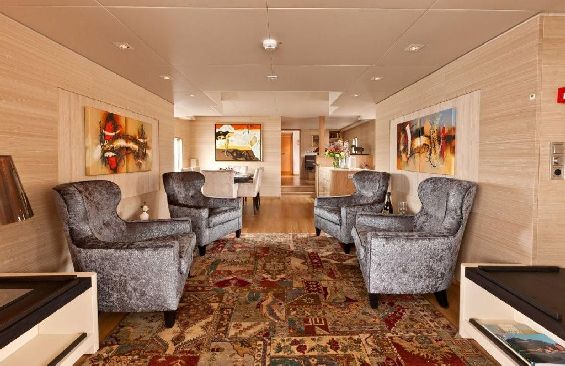 Working in partnership with designer Felix Buytendijk, Lars’ entire superstructure was raised and restyled to give her a more of a ‘yacht’ feel, especially on the forward, where the additional shaping creates the extra space required for air-conditioning and the like. The flybridge of expedition yacht Lars was made more complete, the bridge deck superstructure was lengthened to include a lounge area, and a new swimming platform integrated into the traditional canoe stern. Other highlights of the ‘new’ Lars also features a sun deck area and an observation helm from which the yacht can also be sailed. 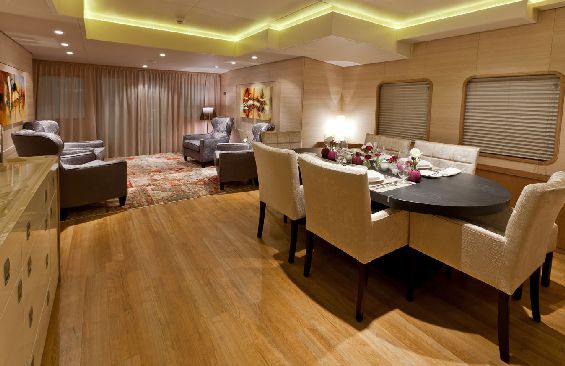 The interior was also finished to a superyacht standard, with a masculine sporty style. Wooden floors were laid throughout as part of a no-nonsense approach designed to keep maintenance to a minimum. Lars certainly offers a pleasant environment for the eight guests to reside on long journeys, with a lounge and fitness room on the bridge deck, a comfortable salon and dining area on the main deck, an owner’s stateroom and three suites. There is also a dedicated accommodation for up to five crew members including a captain’s cabin strategically placed adjacent to the wheelhouse. The main deck aft stores two large tenders and there is a great deal of storage and refrigeration to allow for long voyages. 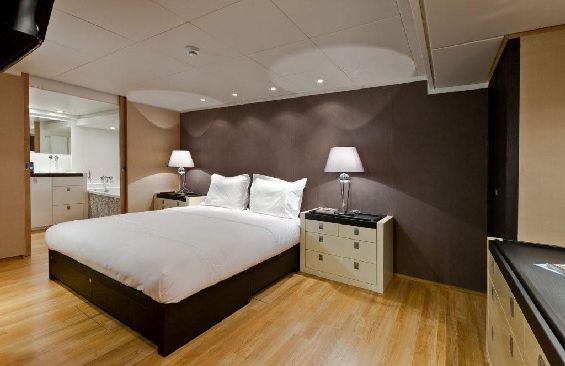 The new superyacht LARS is equipped with  a single 1500hp Caterpillar engine providing her with a range of 3,500 nm with a cruising speed of 10 knots. Lars also has two eight-cylinder Caterpillar generators plus a six-cylinder 160 KW Gardner that can activate a stern schottel thruster in case of engine failure. They all form part of a high-end equipment portfolio that ensures this expedition yacht can tackle the harshest conditions. 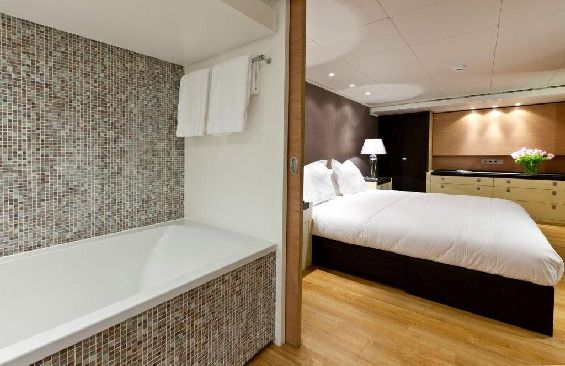 Greenland and Yacht Charters In the Northern Europe

Summer months are the best months to explore the enchanting and breathtaking parts of the Northern part of Europe with daylight hours reaching even 20 hours – an amazing time spam gifted by nature to let you discover one of its most beautiful corners aboard a luxury motor yacht. Greenland is the world’s largest island, contains the world’s largest national park and it is also the largest dependent territory by area in the world. An interesting fact about Greenland is that if its entire ice sheet were to melt away completely, the world’s sea level would rise more than 7 metres (23ft). 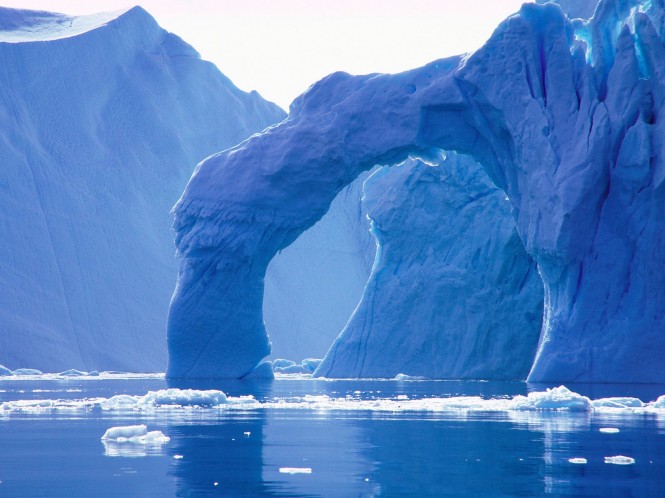 Your charter holiday in Greenland might not include an encounter with a polar bear, one of its biggest predators, however you are more likely to come across whales, musk oxen as well as a reindeer. In addition you might be lucky to be greeted by mountain hares and arctic foxes. One other interesting fact about this part of the world is that there are nine species of wild land mammals living in Greenland and about 60 species of bird breed in the country. 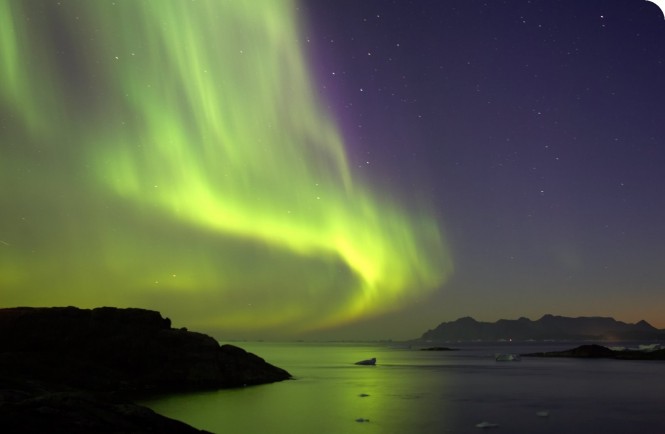 Please, do not hesitate to contact us today for more information about yacht charters in Greenland or enquire about the possibility to charter expedition yacht LARS. 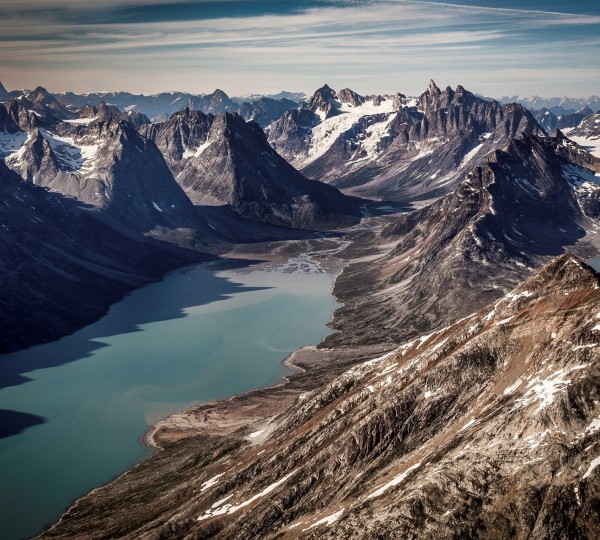 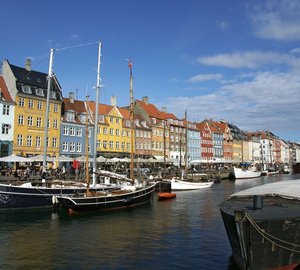 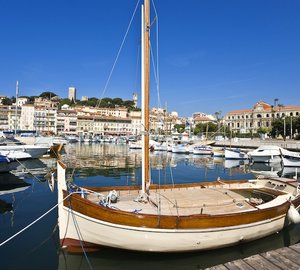 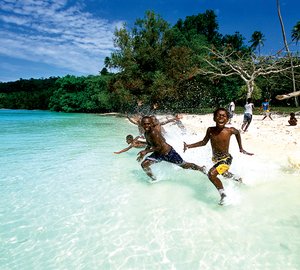 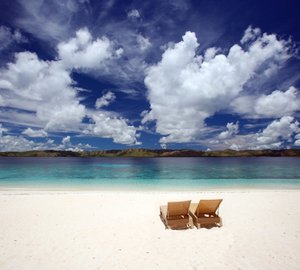