Feadship luxury yacht BROADWATER has gone from strength to strength as both a ...
Browse News Section

Feadship luxury yacht BROADWATER has gone from strength to strength as both a privately Owned vessel and as an option for luxury yacht charters in the Mediterranean and Caribbean & Bahamas; her most recent update at the Royal Huisman facilities has made extensive changes inside and out for adventures in 2021 and beyond. 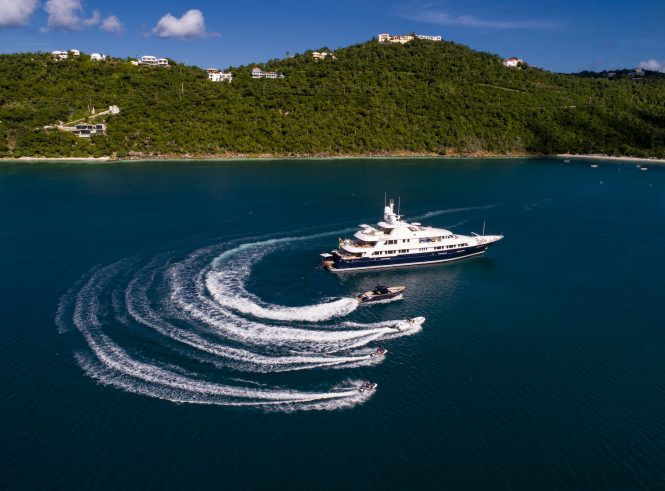 Broadwater at anchor with tenders and toys

56m/184ft motor yacht BROADWATER was previously named RASSELAS – the name she was launched with back in 1994. A series of careful Owners have kept her up to date with the times, changing the timeless elegance that her original interior designer, John Munford, gave her to a more contemporary ambience with just as much grace. 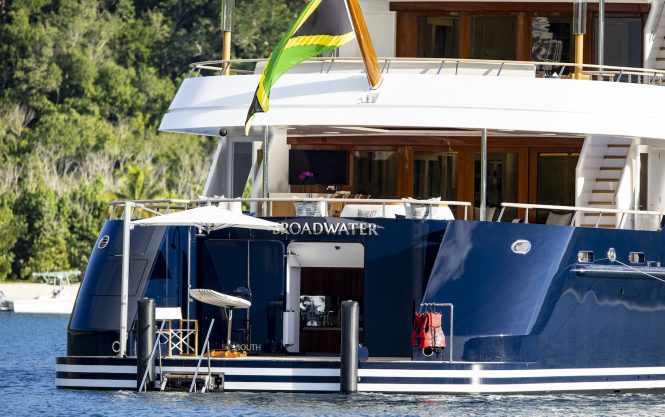 Aft view of the yacht 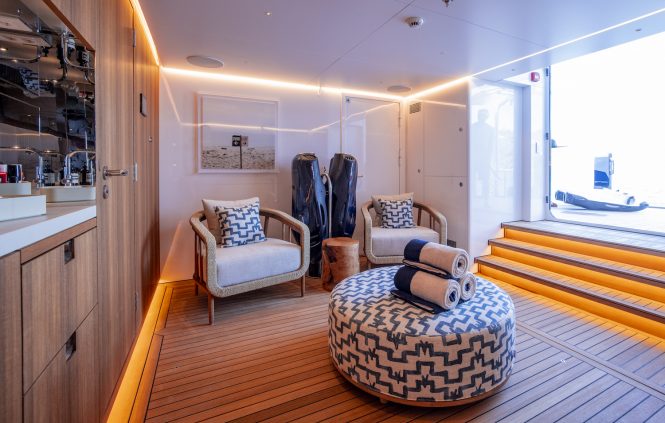 Inside the beach club

Starting with the exteriors, one of the biggest differences is the 4m/ 13ft extension to the stern which adds a beach club and ample swim platform – an addition taken for granted today but which was not a consideration in the mid-90s. This significant undertaking at the shipyard is one of those touches that will go almost unnoticed by guests onboard but represents a great improvement to the quality of life. There is now completely new teak decking on board, and the new hardtop has been built with GRP to avoid adding too much weight, thereby negating the need for support pillars that would significantly alter the appearance. 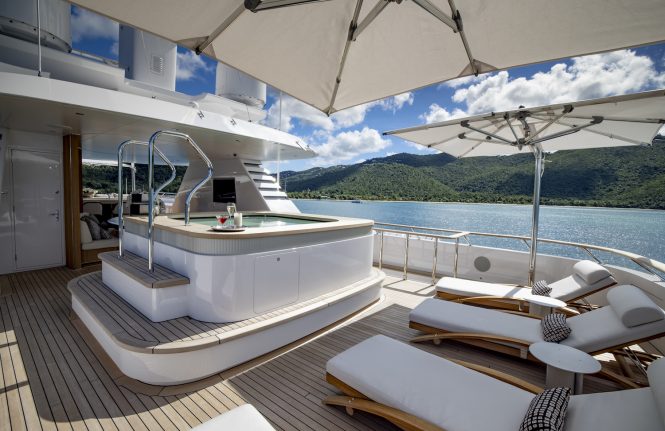 Jacuzzi on the sun deck 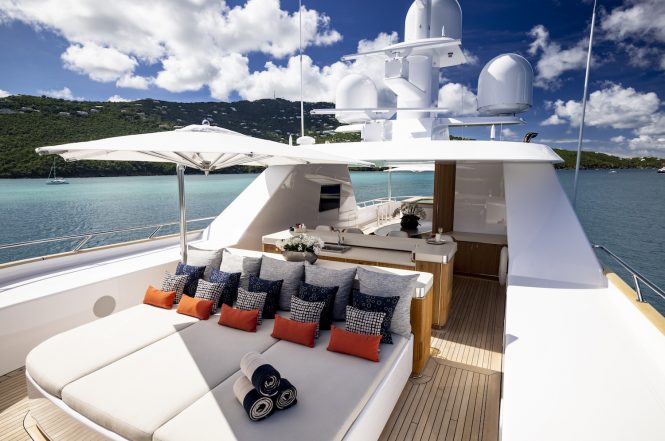 Adam Vorhees created the new exterior and interior styling for M/Y BROADWATER, and the flag blue hull repaint marks her out as distinctively Feadship in heritage. The sundeck has been completely revamped with a new mast and canopy architecture, and a change of layout to accommodate a new large spa pool, a bar and day head along with sunbathing and alfresco dining areas.

When it comes to the interiors, there is no place on board that was left unchanged: The dark mahogany has been entirely replaced with a light and airy Scandinavian look by using European oak, black walnut and fumed Eucalyptus, bronzed tones in the Serpeggiante and Portoro marbles, and furnishings in leather, cashmere, silk and wool. Other influences range from classical French and Italian art deco all the way to the Far East for Indochine and the western coast of the USA for Californian modernism.

Some of the most dramatic changes can be seen in the Master suite, where none of the previous decors remains and the layout has been completely changed to incorporate a double en-suite with a shared glass-sided shower at its centre. There is an abundance of wardrobe space, and woven ceiling panels and artwork above the bed further personalise the space. 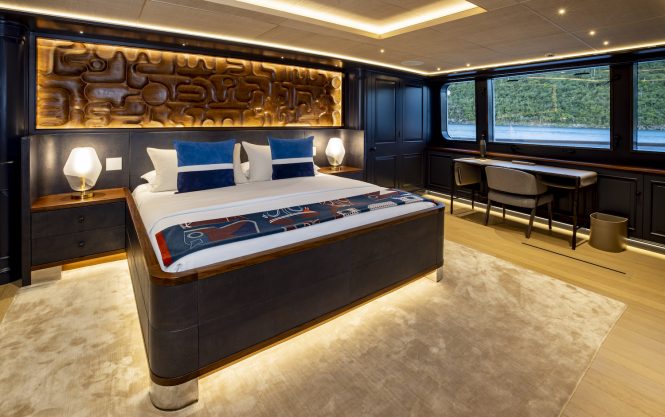 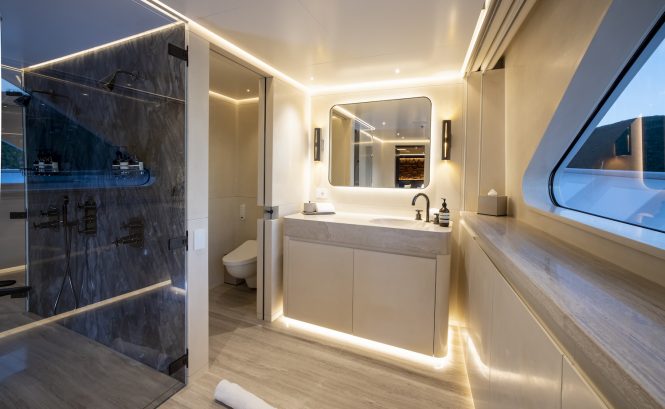 The artwork has pride of place throughout, and the Calder in the main salon served as inspiration for the dining area table and wine display cabinet. The sky lounge has a Derakshani painting that slides open to reveal hidden storage, and is a design feature with the intent of surprising and delighting guests. Other places on board have had the panelling and joinery painted to emphasise the light and space within, while the sauna which was once conveniently located adjacent to the Owner’s main deck suite has instead been converted into an A/V rack room for the improvement of all entertainment systems onboard.

To make superyacht BROADWATER ready for the charter market again, she had to meet Lloyds Commercial Class standards. This required significant upgrades and new installations, among them a new Hi-Fog system, A0 and A60 fireproof bulkheads, the addition of an emergency generator and a new smoke detection system.

Look out for luxury yacht BROADWATER on the charter market in 2021 and be amongst the first guests to revel in her new interiors and amenities, savouring cocktails from the brand new Jacuzzi on sunny afternoons. 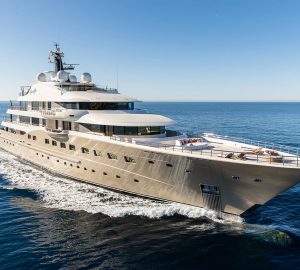 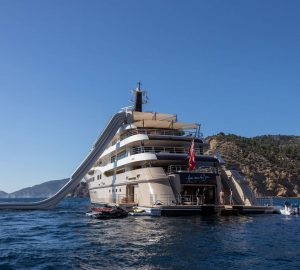 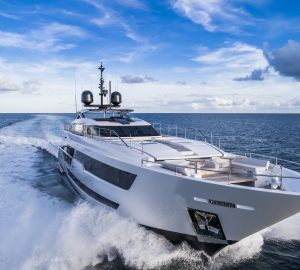