2016-2017 has so far been a very productive period for superyacht refits, yet ...
Browse News Section

2016-2017 has so far been a very productive period for superyacht refits, yet rarely does a classic motor yacht appear on the charter market having undergone more than general repair to wear and tear. When an extensive refit is carried out, such classic yachts tend to be split between two polar opposites: a complete restoration of the interior back to its original appearance, or a modern redesign that combines the original fixtures with cutting-edge technology and 21st Century aesthetics and textures. 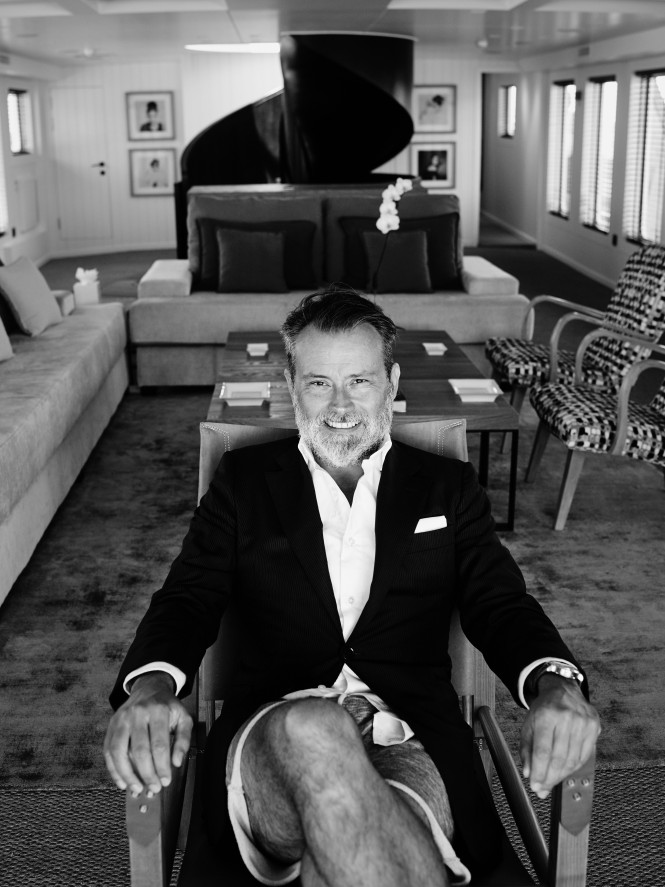 49m/159ft motor yacht MENORCA is one such exceptional example of the latter category: Built in 1960 by Botje Ensing, her owner requested a contemporary interior from Menorca-based interior designers Mare e Terra. The result is a flawless balance between large interior space, natural materials and functionality, while doing minimal disruption to her classic fixtures and traditional layout design. 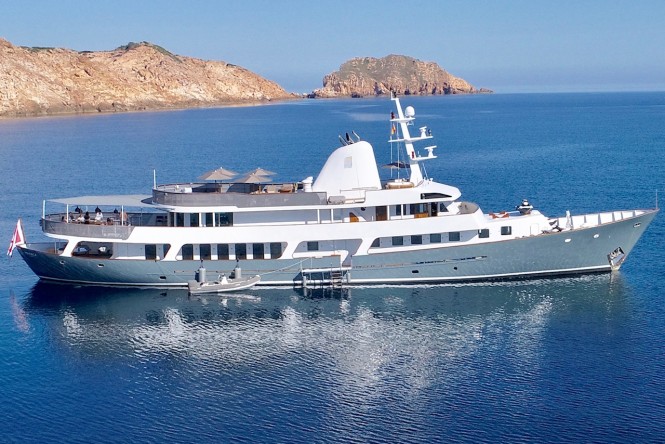 Your company is located in Menorca: Is it a coincidence that this luxury yacht has also been renamed MENORCA?

There is no coincidence here: MENORCA is named as a tribute to the beautiful island of Menorca that is the last gem of the Western Mediterranean, and our design house was chosen because of our strong links to the island. We had also renovated an old Menorcan palace into an hotel named Can Faustino, a Relais et Chateaux that stands on top of the port of Ciutadella. 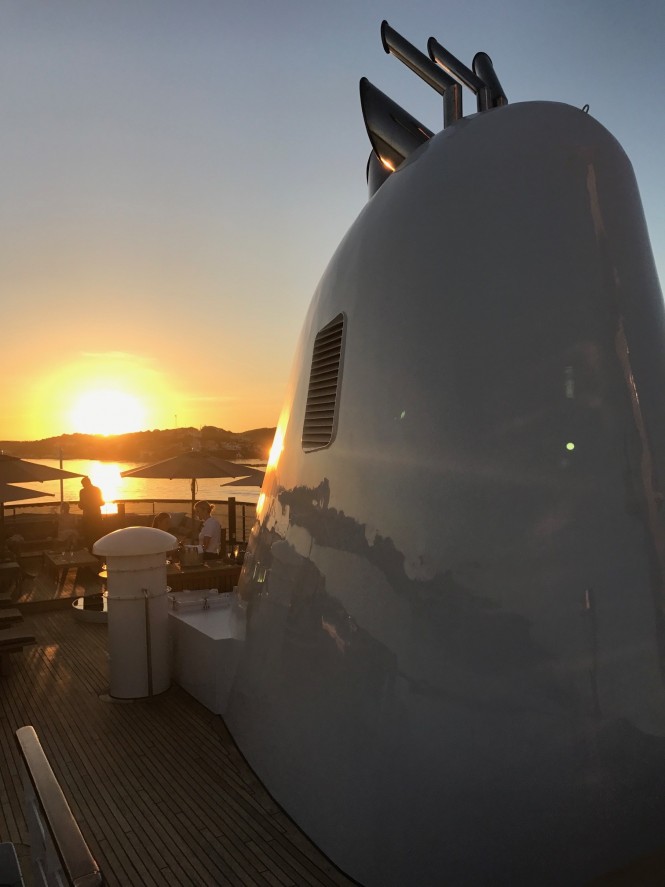 Are there any previous designs that have influenced this one? Is there any idea or object used from an older design that has evolved in this design?

As I’ve mostly sailed and am relatively new to motor yachting, I’ve sometimes thought that the bulk of modern motor yachts look a little bit like ‘plastic cathedrals’. Of course there are exceptions, for instance to my eyes the work of Martin Francis or Philippe Starck stands well above typical interior design standards and I admire their realisation; Nevertheless my vision of a motor yacht is that of a moving luxury beach house and this is what I sought to achieve when designing the refit of M/Y MENORCA; barefoot understated luxury – just what the island of Menorca is about.

With regards to the exterior I was very much influenced by the classic look of M/Y PALOMA and the modern-meets-retro flair of M/Y ALTAIR. We also kept the chimney that is reminiscent of another classic luxury yacht, CHRISTINA O. 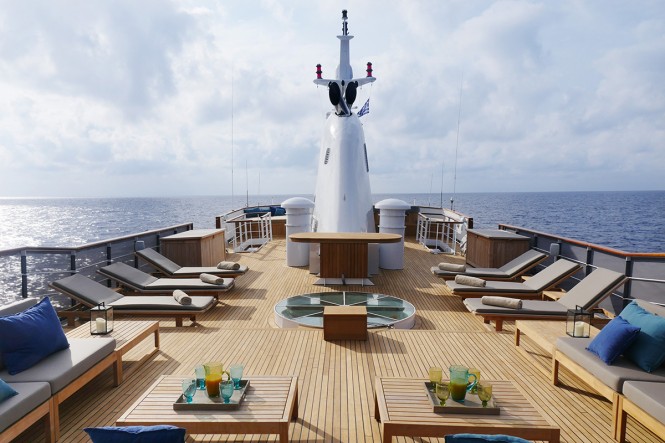 Superyacht MENORCA is a classic from 1961: Was there anything you needed to work around or be sensitive of whilst designing and refitting?

When launched back in the 60’s for the Baron Allard, MENORCA was an important yacht for the time, and when Greek shipowner Papanicolau bought her, he went for a serious rebuild that included the addition of a series of water toys and a crane that was fitted to the enlarged sun deck, greatly increasing her weight. As a consequence, the aesthetic appearance and balance of the yacht was affected and she sat too low in the water.

During her most recent refit we removed everything, including an unattractive Jacuzzi on the bridge deck that blocked the view from the dining room. The result is an enormous sun deck ready for parties of up to 140 people, and thanks to the new reduced weight and increased balance, M/Y MENORCA now stands proudly at her correct waterline, revealing the true beauty of her canoe stern. The cut of the steel bulkhead at the aft of both the bridge deck and sundeck also allowed for a return to the classic look of the 60’s that she had once shared with her sister ship superyacht LAND’S END.

“Charter luxury yacht MENORCA in her brand new condition this summer in the Balearic Islands from €85,000-98,000 per week plus expenses and see the details of her design up close. Contact CharterWorld for more information and to secure your dates today.” 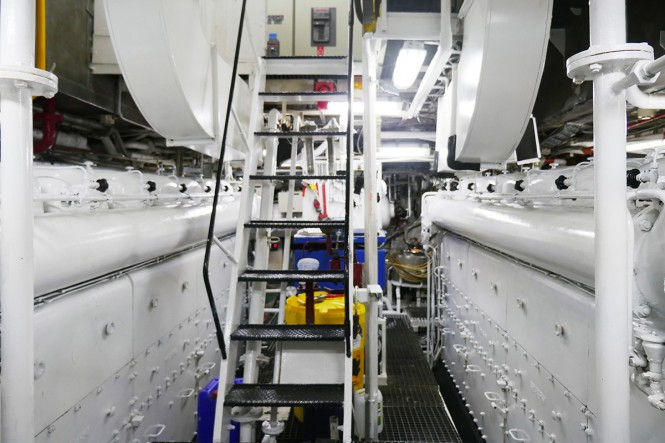 Is everything in the refit new or has anything been given a new lease of life?

The boat went through a serious overhaul but the air start Man engines from 1960 are still there; would you dare to change the motor of a Bugatti Royal or that of a post war Rolls Royce?

Any particularly challenging part of the design?

The staircase was an issue and I think that the wenge spiral staircase is a strong point in the overhauled salon presentation. Creating shade through a pergola-like structure made of mesh fabric without losing the classic line of the yacht was also a challenge, and last but not least, the choice of the colour for the hull was also challenging: deciding between flag blue white or grey there was serious hesitation, but I believe the choice of the grey was right. 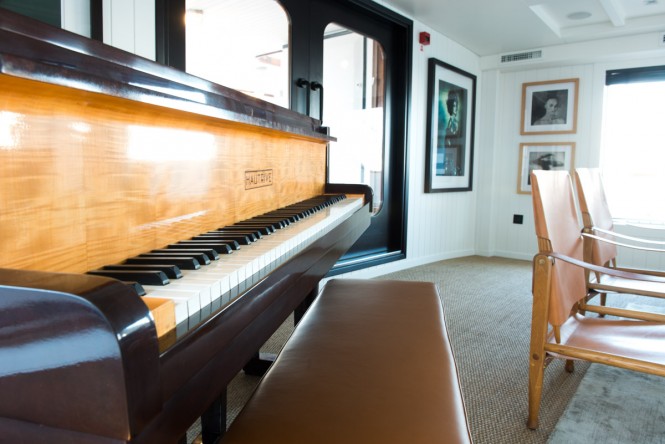 Natural elements are a strong theme in your design ethic: what materials did you use in this design and why?

We used a carpet made of jonc de mer and white lacquered wood panelling for the beach house feel. The paint itself is an eggshell emulsion in a warm off-white, i.e. ‘Menorca white’. In order to balance these neutral tones we used a selection of tinted wenge and oak furniture in the interior. The collection of photos from French photographer Nicolas Guerin and the bespoke piano from a Belgian manufacturer also add up to the overall feeling of family summer house. 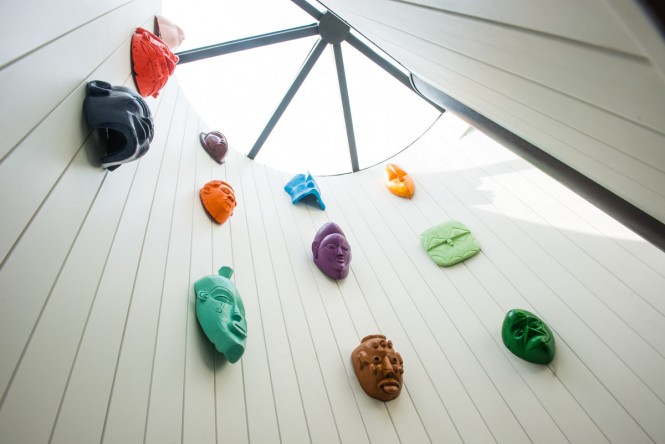 Tell us about the masks in the skylight: Do they have a link to Menorca’s culture?

The collection of coloured African masks belongs to one of the yacht owners; he has another set in his office in Paris that I very much like and I was very keen to have a touch of colour on these walls. There is no link with Menorca in the masks but in the corridor to the VIP staterooms we have added 4 pictures from the St Jean celebration in Ciutadella de Menorca. 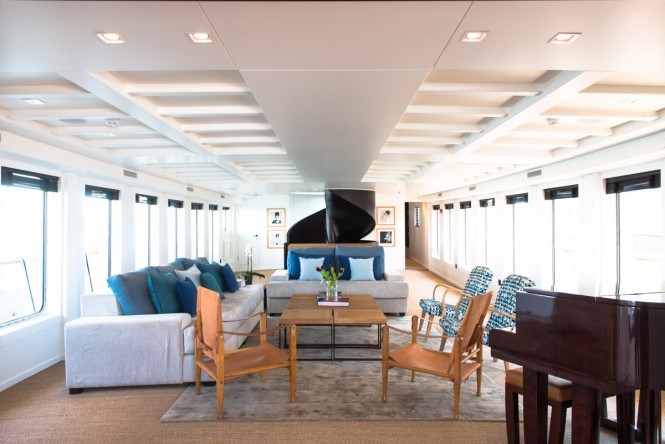 Is there any particular room or design element you are particularly proud of and want to draw attention to?

There are a few individual pieces and places across the decks: I really like the staircase as well as the dining room chairs that we bought at auction from a town hall in Denmark, as well as the safari chairs in the main salon.

I’m also quite taken with the wheelhouse, which captures the essence of James Bond movies from the 70’s. 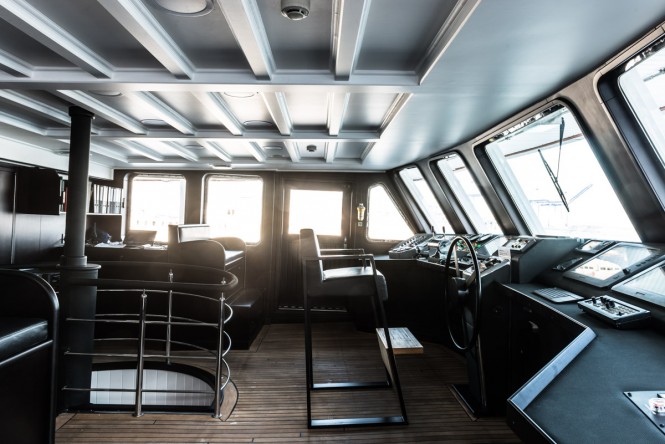 Charter luxury yacht MENORCA in her brand new condition this summer in the Balearic Islands from €85,000-98,000 per week plus expenses and see the details of her design up close. Contact CharterWorld for more information and to secure your dates today. 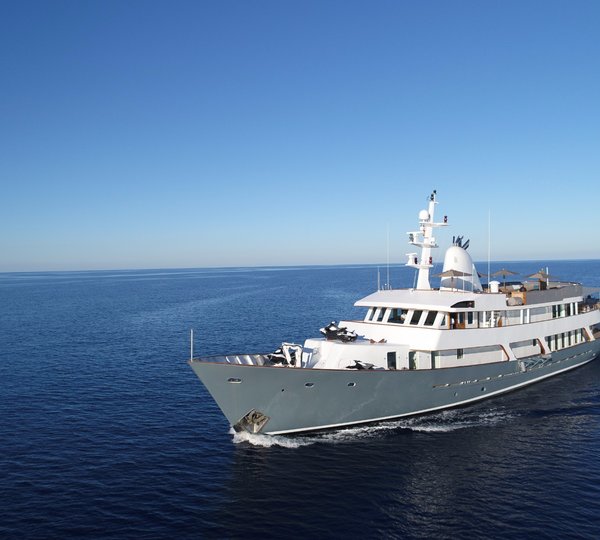 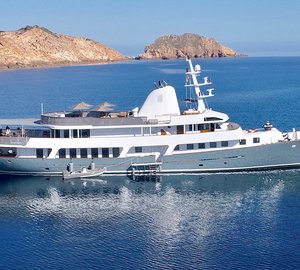 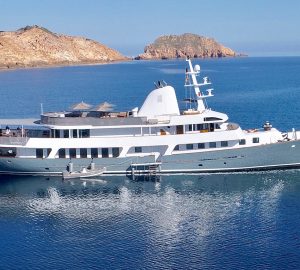 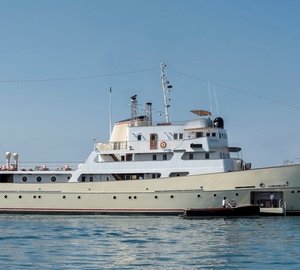 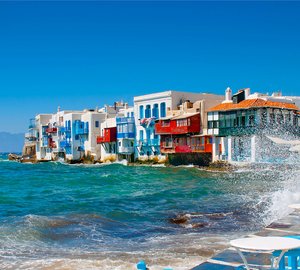