Enthusiasm was in abundance at this year’s Maxi Yacht Rolex Cup as the ...
Browse News Section

Enthusiasm was in abundance at this year’s Maxi Yacht Rolex Cup as the best sailors, most passionate owners, as well as spectacular yachts gathered in Sardinia‘s Porto Cervo for the pinnacle rendezvous of the annual Maxi yacht racing calendar. 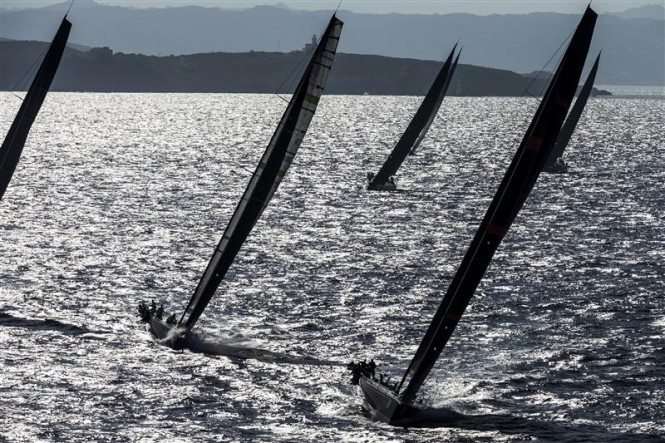 “The two things which make the event unique are the racecourses and the participants,” explained Riccardo Bonadeo, Commodore of event organizers Yacht Club Costa Smeralda (YCCS). “The Maxi Yacht Rolex Cup from the very beginning has always been the event of excellence for ocean-going boats. And the environment is perhaps the most spectacular and technical in the world.”

“This is the pre-eminent regatta. Everyone is training for it for the whole season. It’s where everyone comes together,” explained Niklas Zennström, owner of the highly successful Mini Maxi sailing yacht Rán 2. “It’s the one we all want to win.”

37 yachts, divided into six classes, contested a myriad of challenging racecourses organized during the weeklong event on the Costa Smeralda. While conditions throughout the 24th edition of this pre-eminent competition were light, the Race Committee was able to successfully organize a gripping week of racing. 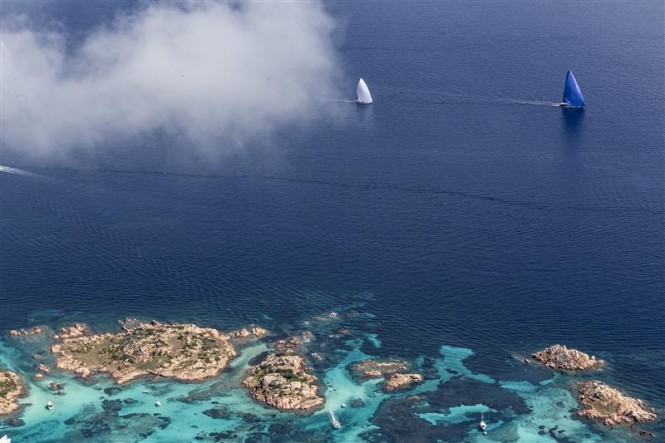 Fast and fascinating
The Maxi Yacht Rolex Cup, sponsored by Rolex since 1985, has always been the showcase and proving ground for a fleet of contrasting yachts, and a chance for designers and owners to meet and draw inspiration for future projects. “I’m always looking for the latest, newest technology and something that’s a bit different to what other people are doing,” admitted Lord Irvine Laidlaw, owner of the 82-ft superyacht Highland Fling. A sentiment and quest echoed by many in attendance.

Many owners are using advances in technology to drive the design of faster boats; an idea at the forefront of Sir Lindsay Owen-Jones’s mind when he commissioned superyacht Magic Carpet 3, a 100-ft yacht designed to answer his quest for a boat that would be comfortable and sail fast whether cruising or racing. Line honours success at the Giraglia Rolex Cup was an early indication of the boat’s speed potential compared to his previous yacht. “It’s much faster. It is much more fun, much more exciting. It feels like a racing boat and that’s what we wanted,” explained Owen-Jones. “Paradoxically, it is a much better cruising boat because of its extra width, which gives people air and space and makes it a very stable cruising platform.”

Owen-Jones had firm ambitions for Magic Carpet 3. “We’ve written our name five times on the wall next to the door to the Yacht Club (Costa Smeralda), the idea of putting it there a sixth time, which I think would be a record for any name, is a terribly exciting idea.”

Despite the presence of Magic Carpet 3 and Sir Charles Dunstone’s Hamilton, whose crew included both British Olympian Ian Walker and Simon Le Bon of Duran Duran fame, the Wally Class was dominated by Jean Charles Decaux’s superyacht J-One, which won four of the seven races. “Consistency, focus and great teamwork is the magic combination and we are very happy to be the winner again after six years,” explained Decaux. “We are the oldest boat in the fleet and smaller compared to the new ones. We really had to make no mistakes, or at least fewer mistakes than our competitors.” 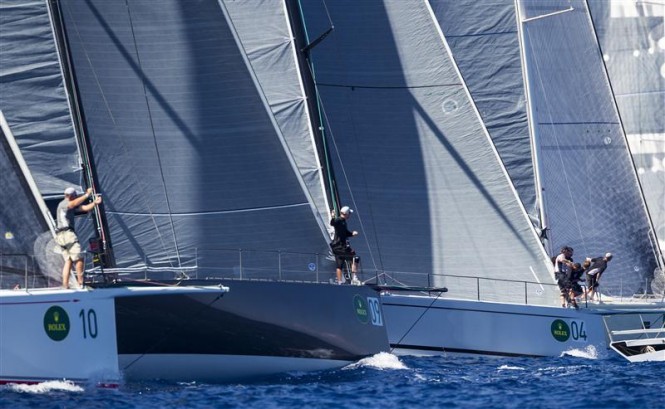 Elegance Personified
While eyes feasted on some of the newer boats, the J-Class offered purists with an eye-catching reminder of yesteryear. Of the four J-Class yachts entered at the Maxi Yacht Rolex Cup, charter yacht Shamrock and luxury yacht Velsheda are restorations of yachts launched over 80 years ago, while superyacht Rainbow and charter yacht Ranger are design replicas of original boats destroyed for metal during the Second World War.

Those competing in the J-Class were not intent on solely distracting photographers. “We enjoy close racing and have to be very mindful dealing with equipment that is incredibly valuable and doesn’t respond that quickly. However, none of us want to simply nurse the boats around the course. We want to push it in the gap, that’s the challenge,” revealed Velsheda’s Tom Dodson.

In the light airs, three-time champion Ranger, the heaviest and largest of the four-strong fleet, struggled to make any headway. Instead, a two-way battle between Rainbow and Velsheda developed. Ultimately, it was the vintage Velsheda, to her own admission slower than Rainbow, who prevailed. A handicap overturned thanks to teamwork and hours spent on the water, according to helmsman Ronald de Waal. 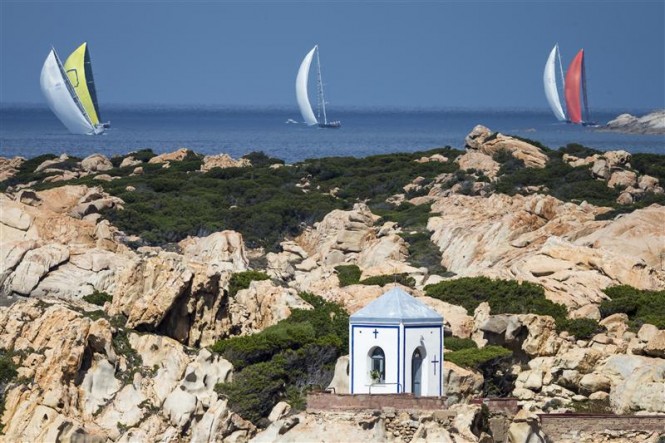 To The Wire
“Any boat in the fleet can win. We are on top of each other rating-wise so if you have a bad tack, bad gybe, [bad] start, you get flushed down the fleet and its tough to climb back. You have to be on your game. The boat that makes the fewest mistakes normally does very well.” Decisive words from Hap Fauth, owner of defending champion luxury yacht Bella Mente from the United States ahead of the much-vaunted Mini Maxi Rolex World Championship.

The fourth running of the Mini Maxi Rolex Worlds was expected to be one of the headline acts of the week. It did not disappoint. The class confirmed its status as one of the world’s most competitive and demanding in world sailing. At the start of the week, four crews had realistic ambitions of lifting the coveted title. Fauth’s 72-ft Bella Mente won last year’s competition just months after its launch. Zennström’s British-crewed two-time champion Rán 2 was eager to reclaim the title in what would be its last appearance at the event. Andres Soriano, whose largely British team is no stranger to Mini Maxi success in the Mediterranean, arrived with the newest Mini Maxi incarnation, the 72-ft Mills design Alegre yacht. George Sakellaris’s Shockwave, another American yacht and the oldest of the quartet, began as slight outsider but a dangerous adversary particularly if airs were light.

The four boats were to dominate the week’s sailing. Bella Mente, counting on a formidable afterguard comprising Terry Hutchinson, Ian Moore and former ISAF Rolex World Sailor of the Year Mike Sanderson, made a poor start. A ninth place in the first coastal race, a result which could not be discarded, compromised her week. From then on she was playing catch-up. “As defending champion everyone was keen to pick up on us quite early in the regatta,” admitted Sanderson. In contrast, Alegre and Rán 2 began impressively. 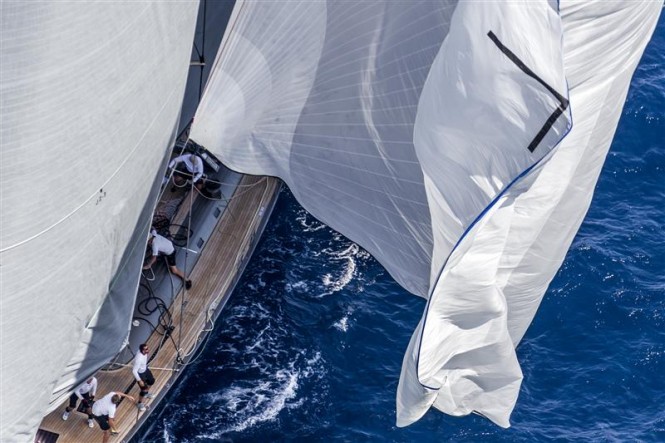 In such close boat-on-boat sailing, race starts became vital. The unpredictability of the competition was demonstrated by five different boats winning the championship’s eight races. The byword was consistency but the erratic conditions and tight competition produced inconsistent results. By the middle of the week with light conditions dominating, it was Shockwave that moved to the top of the leaderboard. “Our boat’s not quite as a big and powerful as some of the newer boats here,” admitted tactician Stuart Bannatyne. “However, we do well in light to medium conditions. With nice clean starts we’ve been able to sail our own race.”

Suddenly Shockwave became the crew to beat although more surprises were in store. On the penultimate day Rán 2 returned to form, impressing for the second time in a coastal race and claiming victory while Shockwave languished in sixth. It set up a tense final day. With two races to go Zennström’s crew lay just two points behind Soriano’s Alegre. There was a confident belief about Rán 2. She had come from behind to win the competition before, her crew has sailed together for years, Zennström has become a very accomplished helmsman. “After a bad day, we always come back with a fighting spirit – it’s a real strength of our squad,” explained navigator Steve Hayles.

On the final day and in shifty conditions, Rán 2 dominated the first race from start to finish. Alegre’s fifth place meant she needed a reversal of fortunes in the final race. Soriano’s crew performed brilliantly, winning the race. It left her needing Rán 2 to finish at least two places behind. With 100 metres of the final race to go Alegre was virtual champion. It all changed in a split second, as second placed Bella Mente gybed poorly and Rán 2 slipped past the American yacht, in the process sealing the title. 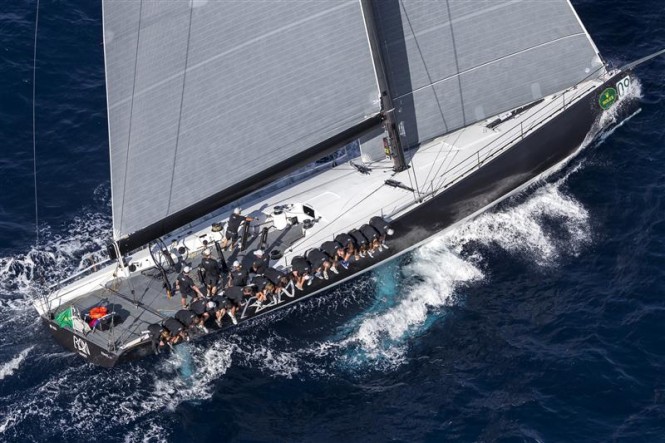 “It is hard to believe,” explained Zennström. “It was really awesome as the competition went down to the wire. This is the last regatta for this boat (a new Mini Maxi Rán will launch next year). It is a special win and amazing to end on a high note. Rán must be the most successful Maxi in many, many years.”

Arguably the most diverse class was Maxi Racing, featuring three contrasting designs: Highland Fling, Hasso Plattner’s Morning Glory from Germany and Brian Benjamin’s 82-ft superyacht Aegir. Seemingly out of contention halfway through the week, Aegir mounted the week’s most impressive recovery with two wins and a second place to triumph against her seemingly more powerful competition. Italian yacht Altair by Robertissima inherited Aegir’s title in Maxi Racing/Cruising while Filip Balcaen’s superyacht Nilaya deservedly sealed a third straight Supermaxi crown with four wins from five races. Reward for all class winners were trophies and Rolex timepieces awarded during the final prizegiving at the YCCS – a perfect opportunity to reflect on a stunning week on the water, a meeting of high drama conducted in a typically sporting manner. 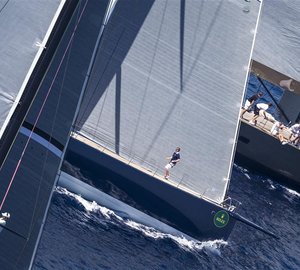 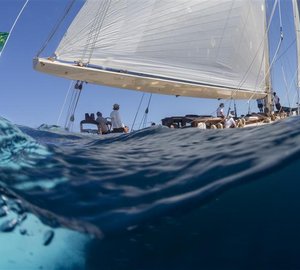