The inaugural Ibiza Rendezvous regatta was hosted by the fabulous Ibiza yacht charter destination from October 8 to 11, 2014. Sailing yacht Windfall, charter yacht Maria Cattiva, Havana, Clan VIII, Aloha-J of Cariba and Silver Spray were welcomed to the exclusive 5 Blue Star Marina Ibiza, where the race is now to be held annually. It was an amazing line-up of some beautiful superyachts, each with her own individual style, perfectly matching the essence of the enchanting Ibiza. 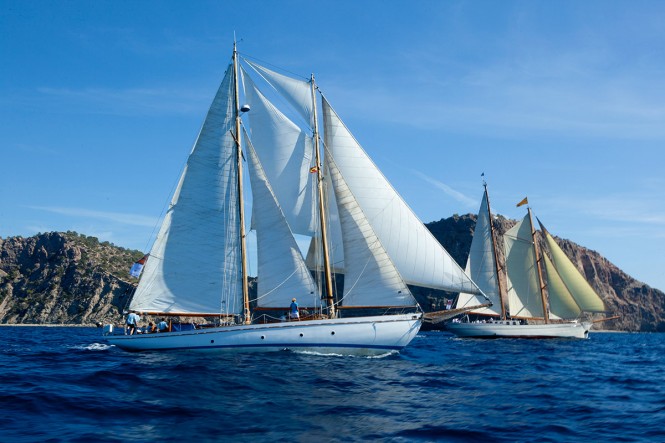 Owners, guests and crews were welcomed to the Rendezvous Village with an Ibiza style dance show, drinks and tasty finger food as the sun set spectacularly over the beautiful old walled town of Ibiza. Situated at the end of the dock next to Calma Bistro, the location was second to none in the middle of the port with stunning views and boats lined up stern to the dock, the view as portrayed in Anna Boulton’s quirky official regatta painting.

Race Day 1 started with the first boat away at 13.00 in a pursuit format, slowest starting first and the fastest last. The course was approximately 20 miles with a steady breeze from the southwest. First over the line was Windfall, with the boats getting back in time for the ‘Dock Party’. Happy Hour drinks were in full swing by the time the last yacht came in, with the local singer Mimi getting the party underway with her soulful voice while guests enjoyed a well earned supper and sipped deliciously chilled rosé under the stars. The much anticipated fastest bowline tying competition took place on the dockside and was won by Calvin Champ, living up to his name and winning a free entry to next year’s regatta for Silver Spray. 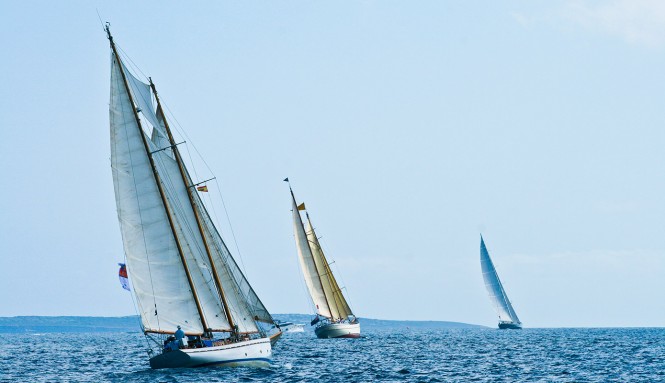 The next day the second Pursuit Race started with a steady breeze, the course set from Es Cavallet beach, round Isla Espardel and finishing off the harbour entrance. Clan VIII came in first with the last three boats finishing within 47 seconds of each other; Aloha J of Cariba, with the two maritime students on board from South Africa sponsored by Marine Inspirations, Peter de Savary´s Silver Spray and, not quite catching them at the line, was the fastest boat in the fleet, the Southern Wind, Windfall. At this point the competition was wide open as any of the top four yachts could have taken the title. Back on the dock late afternoon there was great discussion about the days racing between the yacht owners, their guests and captains who all were invited for an intimate get-together by the committee for drinks in the regatta village as the sun set on another exciting days racing.

Saturday turned out to be as predicted, with light and fluky breezes. With much frustration the Race Committee couldn´t get their anemometer readings above what they needed which meant abandoning the race and heading off to Malibu Beach Club. Clan VIII were first to anchor and go ashore soon joined by the rest of the fleet for paella and drinks, enjoying a fun afternoon of a different kind. Getting back to the dock perfectly on time for the prize giving – by the way, not an easy task – with over 100 enthusiastic crew on a Saturday afternoon! 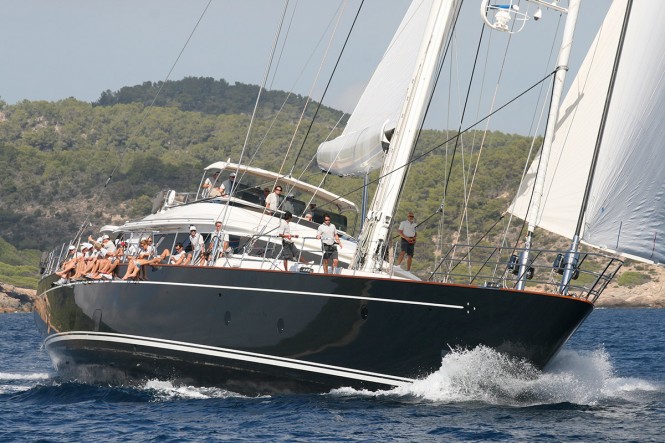 The results were therefore unchanged from Friday, with the overall winner of the first Ibiza Rendezvous regatta Clan VIII being presented the official painting by the Mayoress of Ibiza, Virginia Mari Rennesson. Maria Cattiva received the 2nd prize from Carmen Ferrer, the Minister of Tourism and third was awarded to Havana by Daniel Mari the General Manager of Marina Ibiza. Silver Spray was awarded the “Caracol” (snail) prize.  Signed copies of the regatta poster were sold for the official charity Asociacion Ondine and the remaining limited edition posters are now available online. After the prize giving and drinks on the dockside, the Ibiza Rendezvous “Closing Party” was held at The Harbour Club on the beach with guests dancing the rest of the night away in true Ibiza fashion, many finishing off the evening at the KM5 Closing Party – a fantastic way to end the season in style!

The goal of the IR team was always to take the event back to the original roots of regattas with the emphasis on fun, bringing together the owners and crews with some safe sailing and good parties. Speaking to some of the entrants these are a few of the comments received; 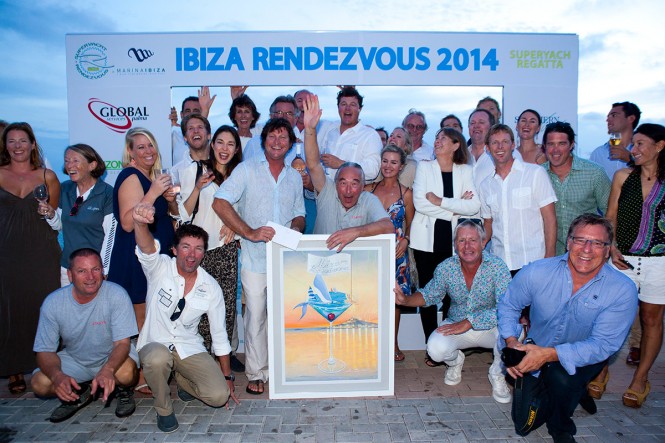 Dave Evans, Captain of superyacht Clan VIII; Overall Winner: “It is an honour for all of us on Clan VIII to be the victors of the inaugural Ibiza Rendezvous. The event was enjoyed by owner, guests and crew alike and was, as billed, a return to the ‘fun’ regattas of the old days. Ibiza as a venue can throw a party like no other Island and this one was no exception. We look forward to coming back from our summer cruising in Northern Europe to defend our title – see you, same time same place, 2015!”

Peter de Savary, Owner of luxury yacht Silver Spray; Winner of the Caracol (snail) prize: “A wonderful regatta…all the organisation was terrific, the entertainment was marvellous and I shall certainly be back next year and encourage other sailors to join in.”

Nacho Lewin, Captain of Havana yacht; Third place: “A really nice way to end the season, see some friends and make some new ones. I hope we can come back next year and have as much fun as we did this year.”

From the Headmaster at Lawhill Maritime Academy regarding Marine Inspirations charity who brought over the 2 students from South Africa to sail: “What a truly magnificent opportunity that the boys have been given. Besides the fabulous sailing in idyllic conditions, they have also had the opportunity to explore ashore, extensively broadening their horizons to history, to another country and to the yachting world….You have enabled them to transcend their relatively small worlds….and in doing so, have enriched their lives.”

It was indeed a tremendous effort from all involved in such a short space of time. Having great media partners helped spread the word effectively so thanks to The Islander, Yachting Matters, Yachting World and Supersail World. Deckers supplied the IR team and crew with shirts and special thanks for Dani Mari Port Captain of Marina Ibiza and his team of marineros who were the perfect hosts, with full support from Club Nautico Ibiza, the Port Authority, Government and Tourist Board. In all, Ibiza welcomed the regatta with open arms.

Thank you also to the Race Committee John Grandy (of GWM Racing), Jim Teeters for setting fair ratings and Monica Recchia (representing Club Nautico Ibiza) for interesting courses. It was a true pleasure to bring the first superyacht event to the island – next year is already shaping up to be a larger event with six yachts already confirmed. Big thanks to the owners and crew for supporting us in our first year. Dates are set for next year October 7th – 10th 2015, open to all yachts 20m+ cruising, racing and classic. Hope to see you there!

Many thanks to all sponsors and collaborators 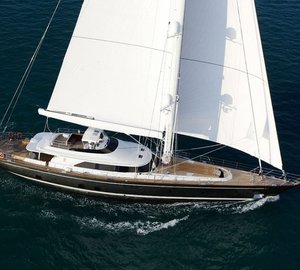 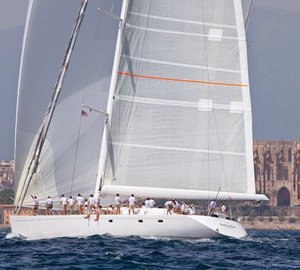 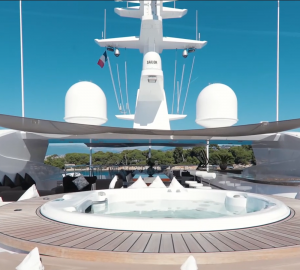 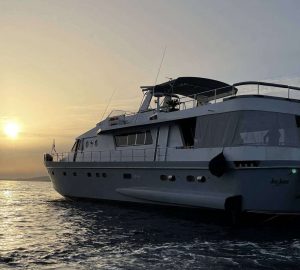