New to the Southeast Asia luxury yacht charter grounds this winter is the ...
Browse News Section

New to the Southeast Asia luxury yacht charter grounds this winter is the 60.4m/198ft explorer yacht AQUA BLU, built by the British Navy in the 1960s and having established a stellar reputation in the Mediterranean cruising grounds as M/Y TITAN in the 2000s. 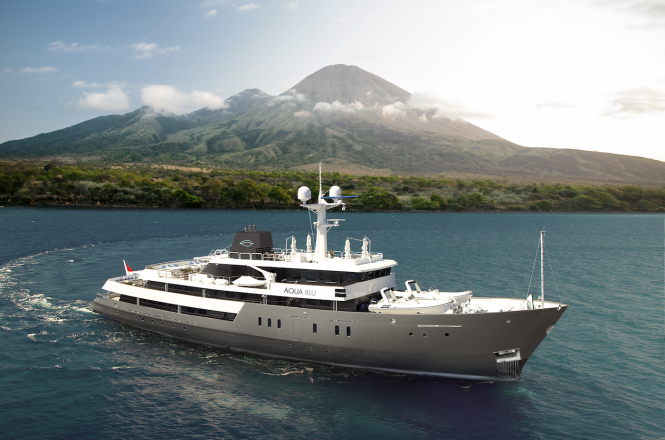 Commencing her inaugural voyage in November 2019, RINA-classed superyacht AQUA BLU is currently receiving a band new interior from famed designer Cor D. Rover, and current concept images reveal a modern and minimalist style made homely by golden tones in the wooden panelling that can also be found in the fixtures and accessories, creating a ‘brass-and-ivory’ themed interior, while contrasting colours in ash and charcoal greys in the furniture provide a cool and grounding element.

The 15 individually-styled en-suite cabins will sleep up to 30 guests and come in three different categories, and two pairs of inter-connecting suites are available. The crew of 25 includes a cruise director, dive instructor, paramedic and English-speaking guides to make the most of a week-long itinerary in such destinations as Indonesia, visiting the Komodo National Park and the incredible dive sites among the Sulawesi and Maluku islands. 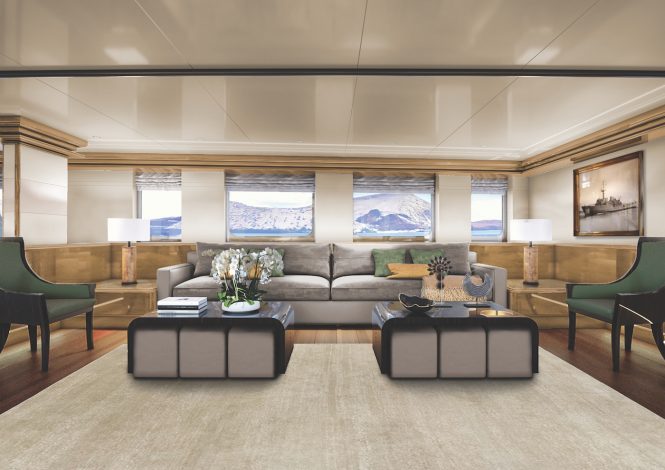 There are plenty of lounges and amenities for guests to rest and rejuvenate, the main deck offering a salon and formal dining room as well as outdoor social areas. The forecastle deck has an alfresco lounge and dining area, while indoors there is a lounge bar, library and media room.

The indulgent spa and Jacuzzi is to be found on the bridge deck and will be a desirable place the ease tired muscles after a workout in the exercise zone. Up top, the sundeck has an abundance of outdoor seating in addition to an indoor lounge, and the barbeque area will prepare savoury treats for vegetarians and meat-lovers alike. 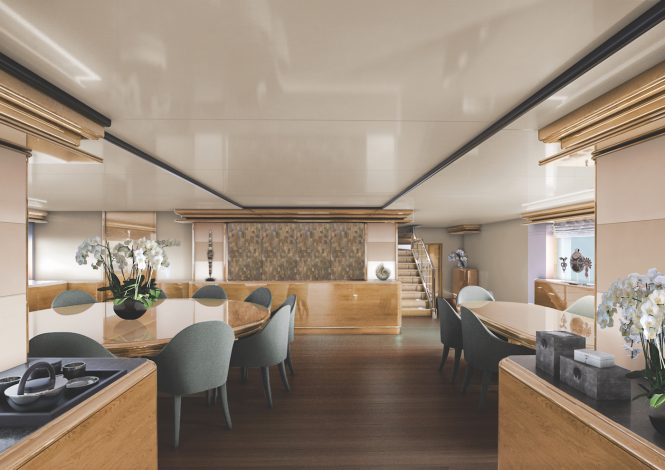 In comparison to the traditional wooden sailing yachts called phinisi that cruise through the region, M/Y AQUA BLU has a top speed of 16 knots and an exhaustive cruising range of 6,000 nautical miles from her heritage as an ex-naval vessel.

Originally starting life as HMS BEAGLE in the 1960 as part of a fleet of four British ocean surveying ships, she was also to be among the last vessels built by the Royal Navy with a wooden deck. Her crew of 45 surveyed the world’s oceans, travelling from the Indian Ocean to the West Indies and from Scotland to South Africa.

Although the fleet was designed to work in pairs, HMS BEAGLE worked solo form the 80 and in 1990 she received a half-life refit that equipped her with the latest Surveying Information Processing System (SIPS) and she was redeployed at home to survey the UK coast in areas not covered by side-scan sonars. 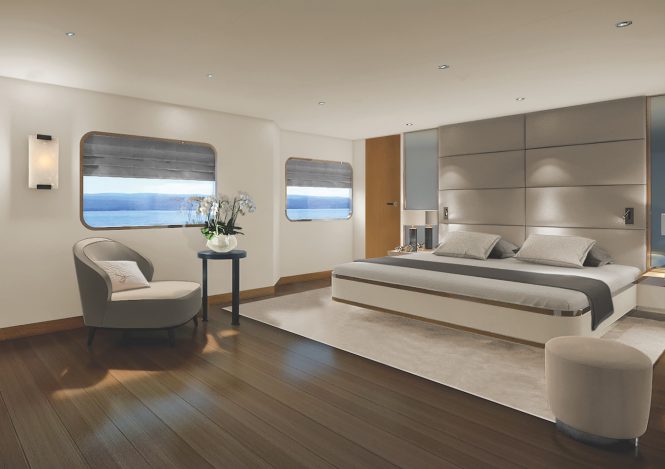 Following more than three decades of service, HMS BEAGLE was decommissioned on the 7th of February 2002 and sold the very next month to begin life as a luxury charter yacht.

The new Owners were Peter and Pauline Bull, who had Owned 52.7m/173ft luxury charter yacht GALU and saw the potential she had for charters due to her broad beam. Over a three-year period at a facility in Pool on the South coast of England, she was transformed by 50 individually commissioned naval architects, craftsman and designers without ever being handed over to a shipyard.

HMS BEAGLE emerged as four deck luxury yacht TITAN and began cruising in the Mediterranean charter grounds, gaining popularity because of her 11 cabin for up to 22 guests.

In 2008 she was purchased by an aristocratic Italian family who installed a new staircase and hardwood flooring in the upper salon, a new sundeck and Jacuzzi as well as a new galley and improved crew quarters. She entered the charter market again in 2014 and in 2018 she caught the attention of Aqua Expeditions Founder and CEO Francesco Galli Zugaro to begin a new adventure as E/Y AQUA BLU.

AUQA BLU’S CURRENT RATES, DESTINATIONS AND ON BOARD FACILITIES 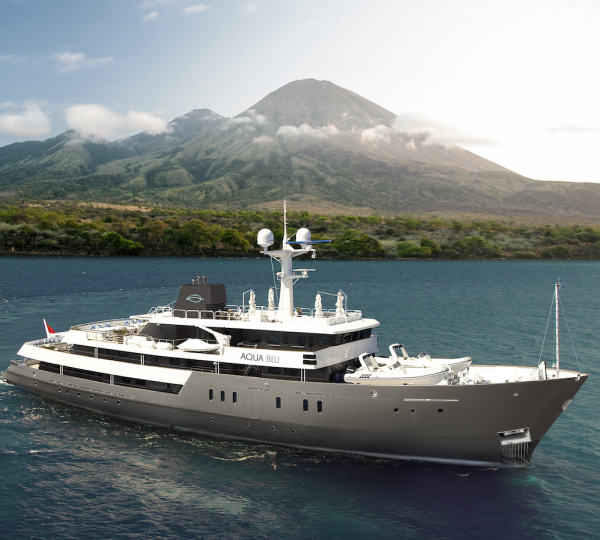 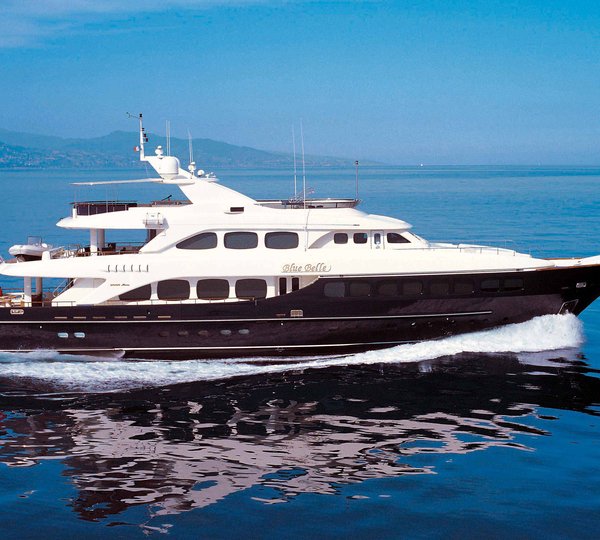 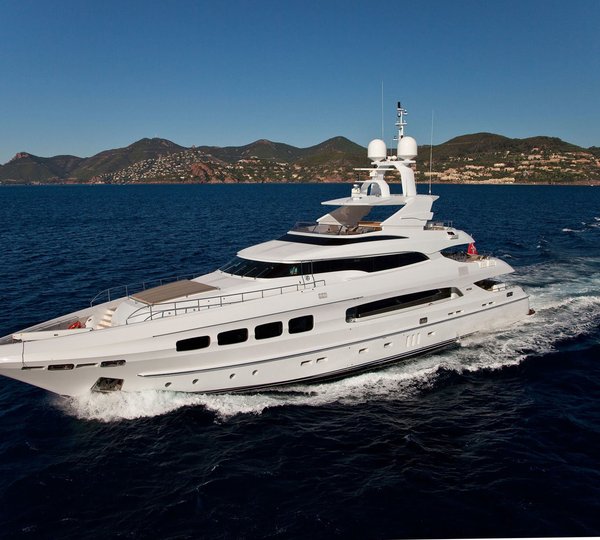 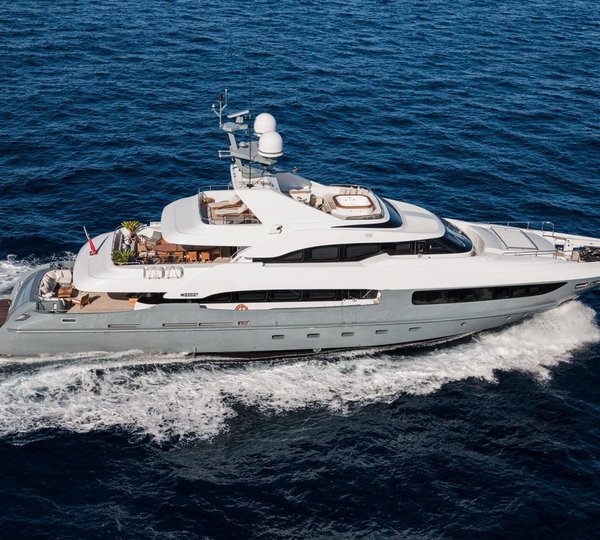 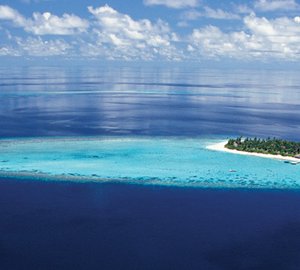 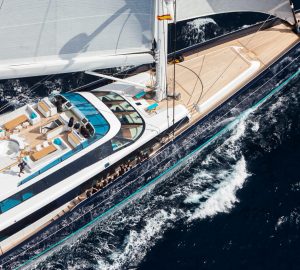 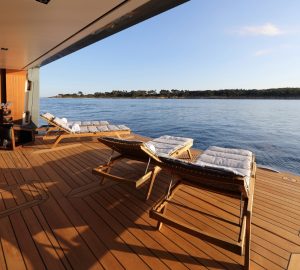 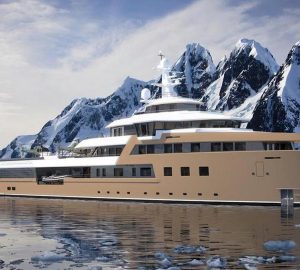