The second race day at Cowes saw tight competition between the top three sailing boats in each race; on some occasions less than a minute separated rival crews to determine the victor. The FAST40+ class was first to leave the starting line under fast-paced 25 knot conditions. The following is a press release from AAM Cowes Week. 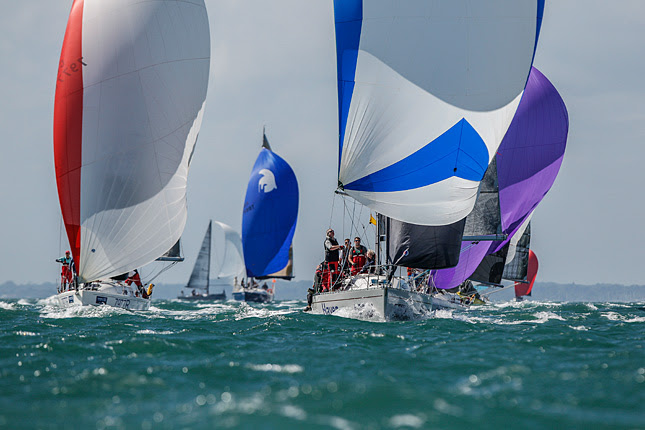 Competitors enjoyed a second day of sunny, stunning conditions at Aberdeen Asset Management Cowes Week today. The early starts saw the wind gusting an adrenaline pumping 25 knots, before the breeze settled down to 16-20 knots for the rest of the morning.

The larger Black Group yachts predominately sailed in the western Solent where they enjoyed sparkling conditions, with the new FAST40+ class first away. They enjoyed superbly close racing, with the three leading boats crossing the line at the end of their 33 mile race only 60 seconds apart. Sir Keith Mill’s Ker 40+ Invictus was today’s victor, crossing the line just 12 seconds ahead of Peter Morton’s Karkeek 40 Girls on Film.

“It was just a great day at the races.” smiled Mills. “We had a tough beat upwind, trying to catch Tokoloshe and Otra Vez, they sailed really well and stayed ahead of us all the way to Hurst Castle. Then after over an hour of beating, we were rewarded with sensational downwind sailing, battling hard with Tokoloshe and side by side with Girls on Film. Sunshine 20 knots of wind and close competitive racing; that is why we have the FAST40+ Class. It was a very rewarding day on the water.”

Speaking from the beer tent after racing Peter Morton added, “It was a really good course today and very demanding – we put in 97 tacks on the way up to Hurst. We didn’t get the best of starts so getting back to second was a good outcome for us.”

The dayboats in White Group had a challenging downwind, downtide start heading towards the east from the Royal Yacht Squadron line. Each fleet in turn congregated in the strongest favourable stream close to the outer distance mark, but different teams – and indeed different fleets – varied in their attitude to the risk of being swept over the line early. The first few starts, particularly the J/70s and SB20s had a strong breeze that peaked with 25 knot gusts that saw them fly down the their first leg at double-digit speeds.

By the time of the Dragon start at 1055, the wind had moderated to 10-15 knots ahead of the tail end of a weak cold front that crossed the race area, before the skies cleared to once again bathe the Solent in bright sun. Thirty seconds before the start the fleet was mostly well back from the line and heading away from their first mark. With 20 seconds to go the first group of boats started turning downwind, with the first spinnakers being hoisted 10 seconds before the gun. Even then, two boats were early – John Mellows’ La Traviata and Mike Hayles’ Naiad. 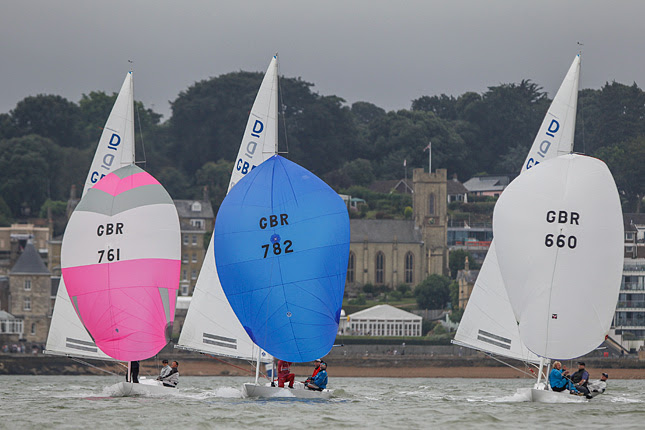 This left Martin ‘Stavros’ Payne’s Bear with a two-length advantage at the gun, but a delay in filling the spinnaker allowed Owen Pay’s Furious to draw level. With both Martin Makey’s Ganador and Eric Williams’ Ecstatic following close on their heels. However, it was Dave Ross, Mr Buddha and Noddy’s Sanka that gained a clear early advantage by gybing on to the favoured gybe right at the outer distance mark. They were in turn overtaken by yesterday’s winner, Graham and Julia Bailey’s Aimee, who led around the first mark and held the lead all the way to the finish. While Sanka held second, there was plenty of place changing around the course further down the fleet.

At the finish Aimee held a lead of 32 seconds on Sanka, while Jerboa finished third only 27 seconds later. “It was absolutely lovely, with superb conditions out there today, plus interesting and challenging courses that involved a lot of current management,” said Dave Ross who scored second place in the Dragon fleet. “It was a great day on the water and we’re looking forward to a great evening to follow it.”

In the 21-strong Sportsboat fleet two of the smaller entries, Livingstone and Lewis’ 1720 Rum n Cork and Jo Gillespie’s Viper 640 V1 were first away. However, they were quickly overtaken by the highest-rated boat in the fleet, Thorkild Junker’s Danish Open 7.50 Cool Runnings. The latter was also among the first boats to gybe offshore towards the strongest favourable tidal stream. 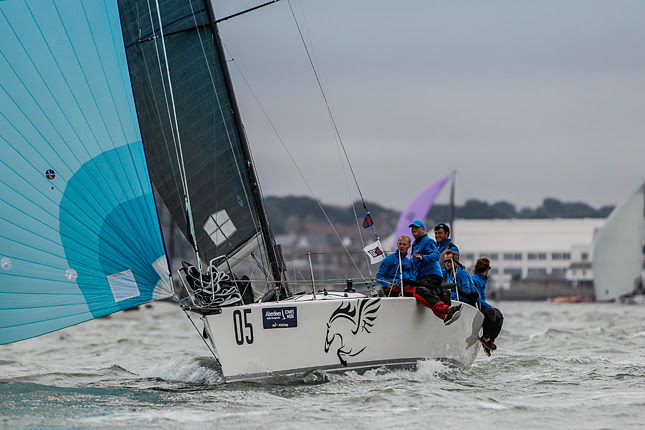 The 20-strong RS Elite fleet is one of a number of White Group classes with steadily growing entries. At the start of their race today the two boats closest to the outer limit of the line, including yesterday’s winner, Russell Peters’ Riff Raff, and Cameron Stuart’s More T Vicar, slipped over the wrong side of the line in the final seconds before their start. Andy and Karen Partington and Gareth Edwards’ Lazy Daisy got away very cleanly, with a two length advantage ahead of Nick Peters’ Way to Blue and Steve Powell’s Etu, the latter being the first of the leaders to gybe offshore. However, it was Ossie Stewart’s Aeolius that led the fleet home, 34 seconds ahead of Roddy, Harry, Owen and Tisha Bowerman’s Basil. Alex Mathieson’s Pipe took third place just 33 seconds later.

The XOD class started from the Bramble line, initially west against the wind and the last of the east going tide to Quinnell, their first mark. Andrew Oddie and Freddie Blencke’s Magic Dragon, and Tim Harding, Peter Haines and Phil Hildyard’s Calypso led away from the northern end of the line, with a sizable lead on the boats behind. The next group was led by Jonathan Clark’s Gin, followed by Paul Woodman, Oliver James and Simon McCarthy’s Ibex, along with class captain Mike Till in Blue Phantom and Kim Slater, Robert Bedford and Ted Tredrea in Madeleine. Penny Fulford was also looking well placed in Rachel.

The fleet worked a long way up the shallow water of the Solent’s north shore before heading back out into the stronger tide to approach the mark. However, many had overstood, with a few boats even forced to hoist spinnakers on their approach to the windward mark. This handed an advantage to Nik Froud, Charlie Cox and Henry Lloyd-Williams’ Venus, who rounded first, followed by Roger Yeoman and Mike Moss’ Xcitation and James Meaning’s Gleam. 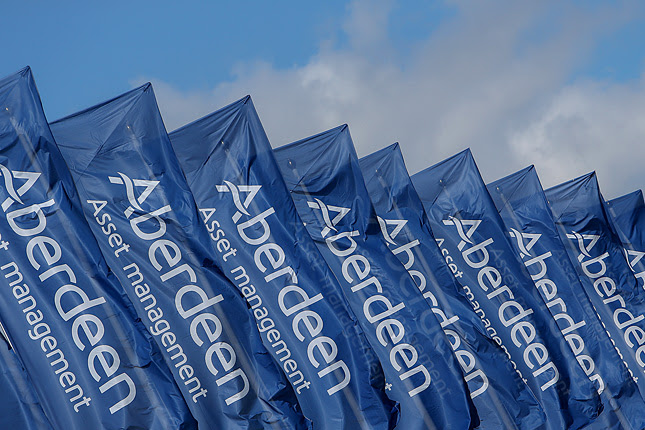 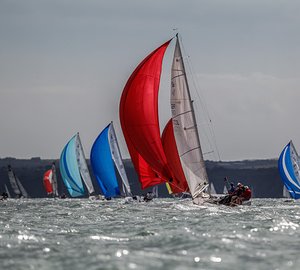 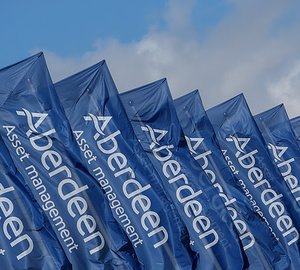 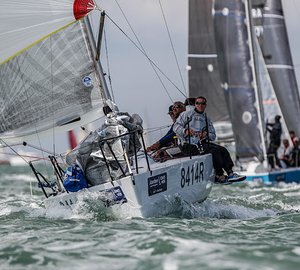 Hilights from Day 6 of Cowes Week