2012 Samui Regatta: Day 4 – A steady breeze to get the races underway

Day 4 of the 2012 Samui Regatta saw light winds as the yachts left the ...
Browse News Section

2012 Samui Regatta: Day 4 – A steady breeze to get the races underway

Day 4 of the 2012 Samui Regatta saw light winds as the yachts left the anchorage but the Race Committee found a stabile breeze to get the races underway between Samui and Phangan islands. AP down at 10:44, IRC Zero into start sequence, and they left. 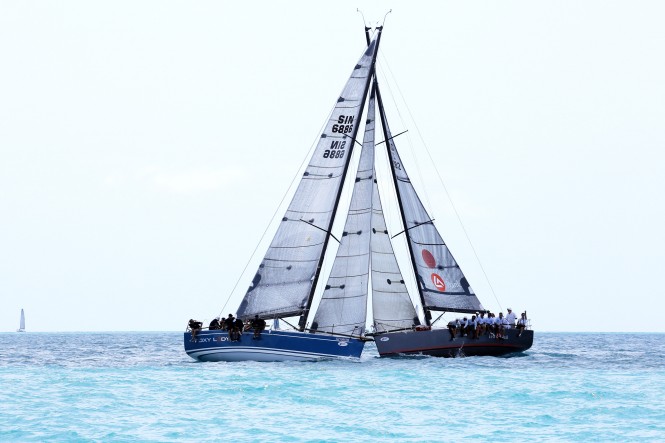 Race One courses were set: Windward/ Leewards for IRC Zero, IRC One and Multihulls, and longer passage races for IRC Premier and IRC Two/ Bareboat classes.

With two races planned for IRC Zero today and more tomorrow, there is still plenty to play for in the series as they got underway this morning in 8 knots of breeze. Three boats completed in under an hour with the 90-foot Maxi superyacht Genuine Risk, skippered by Geoff Hill, taking Line Honours in 16 knots of winds. After breaking their boom in the gusts on Wednesday (Day 3), team Freefire rapidly made repairs over the Lay Day yesterday and surprised some by making the startline today. Not only did they make the startline, they took the win on corrected time by 15 seconds from series leader Hooligan, skippered by Marcus Blackmore who was called over at the start. Neil Pryde’s HiFi finished third.

For their second race, IRC Zero were sent on a passage race (approximately 35nm) and Genuine Risk showed the fleet a clean pair of heels winning Line Honours by almost 50 minutes. However, they lost out on handicap to Hooligan who took first. Second place went to Freefire, skippered by Sam Chan and third to HiFi.

It’s tight at the top in the IRC One class. Shredded spinnakers and other damage during Wednesday’s racing (Day 3) saw many crews busy on the Lay Day making repairs. Coming into today’s racing, Bill Bremner’s Foxy Lady 6 leads EFG Bank Mandrake, skippered by Nick Burns/ Fred Kinmonth, by one point with Steve Manning’s Walawala 2 in the wings waiting for one to slip-up.

That was not to be as Bill Bremner steered Foxy Lady 6 to its fourth win of the series ahead of EFG Bank Mandrake, with Line Honours winner KukuKERchu, skippered by David Ross, taking third on corrected time.

The second race was a 26nm passage race. With the longer distances tending to favour those flying asymmetric spinnakers (Jing Jing, Walawala 2, etc.), there was a chance to cause an upset at the top of the standings. First to finish was KukuKERchu skippered by David Ross, but it could not be converted into the handicap win. Second over the line and winner on corrected time was EFG Bank Mandrake, with Foxy Lady 6 less than 30 seconds behind. Walawala 2 finished third.

Foxy Lady 6 and EFG Bank Mandrake traded firsts and seconds today, leaving them separated by one point with Foxy Lady 6 taking the advantage into the last day.

In the Multihull class, Andrew Stransky and crew on Fantasia returned to their winning ways in Race One with the handicap win and a mere 17 seconds behind Sweet Chariot over the line. Second place on corrected time went to the fast-improving Sonic, skippered by Kirati Assakul with Henry Kaye’s Sweet Chariot in third.

The second race of the day for the Mutihull class was a longer passage race, approximately 26nm. Sweet Chariot revelled in the conditions scoring the daily double – Line Honours and handicap win – with Fantasia in second and Crazy Horse, skippered by Kunta in third. Fantasia looks unstoppable going into the last day with a five point lead, but second and third places are separated by just one point.

Reef Knot, skippered by Stuart Collins came to the fore in IRC Two/ Bareboat class with the win ahead of Greg Coops’ Abraxas and Amanda, skippered by Lennart Fahlgren in third. All is still to play for with just two points separating the top three going into the last day of races.

Dynamite, skippered by Brad Kirk retired from IRC Premier racing today leaving the top two, Moonblue 2, skippered by Peter Churchouse and El Coyote, skippered by Gary Baguley to battle it out. Separated by almost one hour on-the-water, Moonblue 2’s speed proved too much and took the win on corrected time. 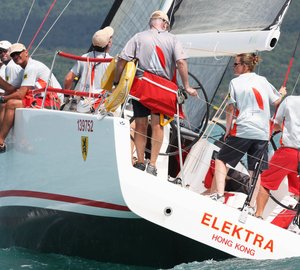 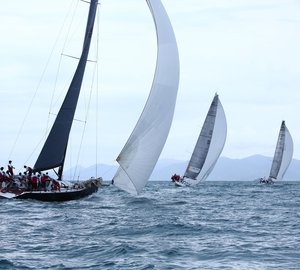 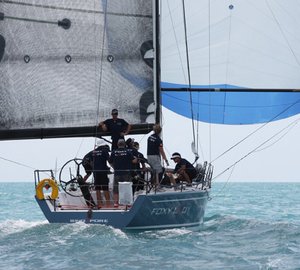 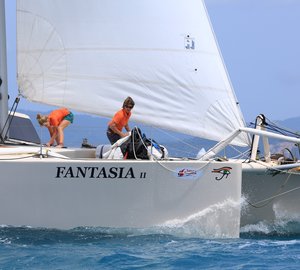