Shortlisted for the International Yacht and Aviation Awards 2016 in the ...
Browse News Section

Shortlisted for the International Yacht and Aviation Awards 2016 in the ‘Over 40m’ category, AQUEOUS represents the latest mega yacht concept by Facheris Design. The project measures impressive 120-metres in length and was created to merge generous dimensions with a fresh and striking profile.

AQUEOUS boasts an impressive 400square metre aft deck, fitted with a huge infinity pool, a retractable awning, which covers a section of the aft deck, as well as a double lounge seat and bar. Two large garages are designed to cater for two 11-metre limo tenders, a jet ski and additional water toys and equipment to emphasise the ultimate superyacht lifestyle.

The forward deck incorporates a large sun pad as well as the popular Jacuzzi, considered integral features for any privately owned or charter vessel. One of the main features is AQUEOUS’ transformable sun pad, which can easily turn into a helicopter landing pad.

The 120-metre concept promotes a modern use of materials, with glass as one of the main features throughout her superstructure and hull, maximising the amount of natural light entreating each cabins as well as the socialising areas. This expensive visibility creates a synergy between the interior and exterior spaces aboard this vessel and beyond.

The concept is designed to be powered by an environmentally friendly hybrid propulsion system, resulting in less emissions. 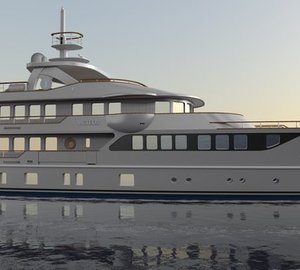