With solar power across the Atlantic – Solar boat expedition reaches the American continent before continuing to Cancún for the World Climate Change Conference.

The TÛRANOR PlanetSolar has reached the American continent on its voyage around the world. This morning at 8.15 a.m. LT (1.15 p.m. UTC) the boat docked at the Miami Beach Marina (South Beach). 61 days, 0 hours and 34 minutes had passed between the boat’s departure from Monaco on 27 September 2010 and its arrival in Miami. The entire circumnavigation of the globe will take at least ten months.

Manned by a crew of six, the sleek catamaran TÛRANOR PlanetSolar developed and built for a German-Swiss team surrounding the Darmstadt eco-businessman Immo Ströher and the Swiss visionary Raphaël Domjan, is currently undertaking the first circumnavigation of the Earth using only solar power. The next port of call will be Cancún in Mexico. The arrival of the world’s largest solar-powered boat in Cancún is scheduled for 6 December to coincide with the World Climate Change Conference of the United Nations Framework Convention on Climate Change (UNFCCC).

“We have a goal in showing that we can change, that we have the technology, the knowledge, the means. It is possible for each of us to make a difference and it depends on both our individual and collective responsibility” says Raphael Domjan.

Imme Ströher, the boat owner, explains: “We want to show with our project that in addition to the stationary generation of power, solar energy can also provide solar mobility. In this way we can use sustainable energy technology to make a decisive contribution to climate protection in the sphere of transport,” explains Ströher.

To date the maritime transport sector has been considered as extremely wasteful with regard to energy.

The catamaran TÛRANOR PlanetSolar is 31 metres long and 15 metres wide and is driven exclusively by solar energy. The name TÛRANOR is self-explanatory: it is derived from the Lord of the Rings trilogy by J.R.R. Tolkien and means “The Power of the Sun”. The experimental high-tech vessel has completed the first stage of its voyage across the “Big Pond” with stops in North Africa, the Canary Islands and the Caribbean to the complete satisfaction of its inventors.

The futuristic electric motorboat is of incredibly light yet extremely durable carbon-sandwich construction. The boat was designed by the New Zealander Craig Loomes, one of the most innovative boat designers of the world today. Loomes designed the TÛRANOR PlanetSolar according to the so called “wave-piercing” principle, where the catamaran “cuts through” the waves. This uses less energy than is required for conventional concepts, where the boat “rides” the waves. The solar catamaran was built by the Kiel-based boatbuilders Knierim Yachtbau in close cooperation with HDW Howaldtswerke Deutsche Werft. A total of more than 20 tonnes of carbon fibre, 11.5 tonnes of foam core and 23 tonnes of resin and hardener were used.

The most exciting feature of this enormous double-hulled boat becomes apparent from an aerial perspective: solar panels by Solon AG from Berlin are installed on deck. These panels use highly efficient photovoltaic cells by the US supplier SunPower Corporation (San Jose, California). A total of 825 modules, equipped with 38,000 individual photovoltaic cells are mounted on a total surface area of 537 square metres. These capture solar energy, which is then stored in six dozen ultra-modern, maintenance-free lithium-ion technology batteries. The storage units weigh only one-seventh as much as traditional lead batteries.

Four electric motors from Nuremberg – two each per drive shaft – have a maximum output of 120 kW and an incredibly high energy efficiency of over 90 percent. They drive two contra-rotating carbon propellers from Voith Turbo Marine Composite Technology GmbH in Hohen Luckow near Rostock. It is interesting to note that the diameter of each propeller is almost two metres, twice the usual size for avessel of this size. This makes the propulsion more efficient.

The idea of circumnavigating the world using solar technology is the vision of the Swiss Raphaël Domjan, the founder of PlanetSolar. The PlanetSolar team consists of physicists, engineers, shipbuilders and enthusiastic supporters from all the corners of the globe who are committed to the concepts of environmental protection and the support for renewable energy. “We want to motivate engineers and scientists to develop innovative technologies. This is to show that visions are about to become reality,” explains Domjan. Eco-businessman Ströher points out: “We are on the way to showing that motorised shipping can also function without fuel.” 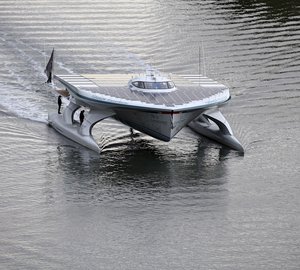