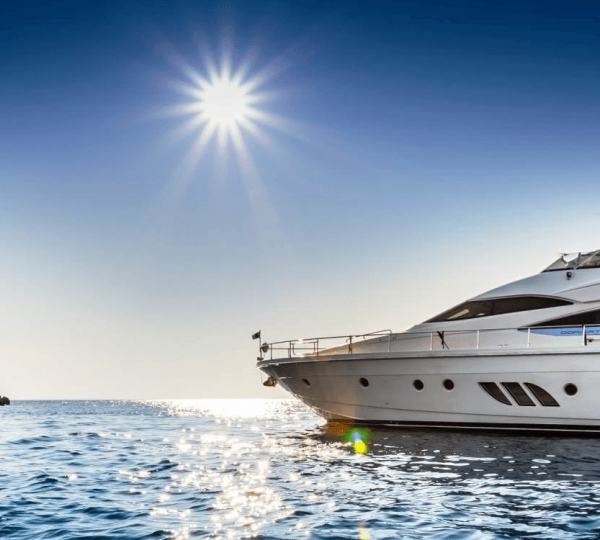 Fly into Split airport and board either at Kastela marina or in Trogir (port depth to be confirmed). Trogir is a city rich in historical and cultural heritage. The city offers a wealth of museums, galleries, bars, restaurants and festive activity. Get settled onboard before setting off on a short hop to Trogir. This is one of the jewels of the Dalmatian coast and is a town of extraordinary architectural beauty. In 1997 Trogir was listed as a UNESCO World Heritage Site. Most of the old historic centre of the town is on an island and is encircled by a wall with two gates. A bridge now joins the island to the mainland and another links it to the island of Ciovo. The main old town is centered around the St Lawrence cathedral which features an elaborate doorway built by Radovan, the designer and historical source and inspiration to the most prominent Croatian writers, sculptors, architects and musicians.

Head towards Brac in the early morning before the hordes arrive by ferry. This is an attractive island covered in pine forests, olive groves and vineyards. Milna is the best natural harbour on the island of Brac. Nice coves with sand and pebble beach’s stretch in the vicinity of the harbour (Pasika, Osibova, Lucice, Maslinova). It’s also home to the famous ‘ Golden Horn’’. Spend an hour or two in Brac before departing for the Paklinski Islands– famous for their secluded coves and beaches. Please note that both ‘The Golden Horn’ & Paklinski Islands are known as nudist beaches.

In the afternoon, continue onto Hvar - one of the best known islands of the Dalmatian’s. Hvar Town is a quaint and beutiful port town.

Art treasures, a mild climate, good beaches and fields of lavender make this island one of the treasures of the Adriatic. Limestone hills form the central ridge. Hvar’s story begins in the 4th century BC when the Syracusans of Issa founded Pharos (the present day Stari Grad) and Dimos (Hvar) Traces have been left by the Romans , the Byzantines, the Croatian sovereigns and the Venetians, who ruled from 1278 until 1797. After 1420, defences were built and the capital was moved from Pharos to Hvar. In 1886, under Austria-Hungary, the Hvar Hygenic Society began to promote the town as a health resort. It is the oldest settlement on the island. It lies at the eastern end of a large bay. Hvar is a town whose magic transcends its sheer architectural beauty. Although it is quite small, every stone here breathes charm. Hvar is home to: The Fortica Hydroarcheological Collection - one of the finest collections of the ancient amphorae in Croatia; The Hanibal Lucic Benedictine Art Collection – is a collection of paintings, icons and other artifacts and objects of everyday use from the convent treasury, The Franciscan Art Collection is housed at the Franciscan Monastery, The Treasury of the Hvar Cathedral, The Bishop`s Museum, Oldest Community Theatre (1612), Renaissance Cathedral with its original tower, the unfinished palace of the poet Petar Hekrorovic with its ponds and arcades and early Christian baptistery”

Today cruise to the islands of Bisevo & Vis. The Island of Bisevo is to the southwest of the Island of Vis. This island is famous for its Blue Cave (Modra spilja) with entrances both above and below sea level. You will want to visit the cave between 11am – 12 when the sun’s rays pass through the underwater opening to bathe the interior in an unearthly blue light. This easily rivals the Blue Grotto in Capri and it is considerably larger, and has a natural monumental entrance.

After lunch, continue onto Vis, known for its fishermen and seafarers. It’s beautiful in nature and history and is far from the bustle of the mainland. Tonight, enjoy an evening out at Villa Kaliopa. This restaurant is exquisitely set in the exotic gardens of the 16th century Gariboldi mansion. The restaurant is at Vladimira Nazora 32 and set midway between Old Town and Kut. They don’t have a phone so you won’t be able to call and book in advance!

Today, with the right wind you can enjoy a great sail down to Korcula. The magnificent historic town and island of Korcula famous for its traditional Knight's dance celebrating the Turkish assaults on the island.

“The island of Korčula is covered in dense forests of alepo pine, cypress and oak trees. Because of its cultural heritage and numerous legends told over the generations it is undoubtedly one of the most interesting islands in the Croatian Adriatic. The town of Korcula is perched on a peninsula surrouned by strong 13th century walls reinforced with towers and bastions by the Venetians after 1420. The whole town is enchanting. Narrow streets branching off the main road are designed to lessen the impact of the boaara wind. Apart from the town of Korčula, other towns on the island that are worth mentioning are Lumbarda and Vela Luka. The legend has it that in the 12th century B.C. the town was founded by the Trojan hero Antenor, while Greco-Roman writers recorded the town as Korkyra. The Latin name Corcyra Nigra (black Korčula) was given to the island because of its dense woods. In Blato, situated like Rome on seven hills, there is another, equally interesting knights' dance called "kumpanija" (company). It symbolizes the struggle for freedom. The Korcula Statute of 1214 is one of the oldest legal documents to have been adopted in this part of Europe. The same century saw the birth of the famous world traveller and explorer, Marko Polo; his place of birth still exists in the town of Korcula. Korcula is, after Lokrum and Mljet, the third most densely wooded island of Croatia.”

Depart after breakfast for the island of Mljet, the greenest island of the Adriatic and anchor in the bay of Polace. Perhaps visit with a guide to the National Park and the beautiful interconnecting lakes of Veliko Jezero and Malo Jezero. For most people, Mljet is an island lost in the open sea. Mljet National Park has been proclaimed as an area of special interest for the following reasons: The salt lakes are a unique geological and oceanographic phenomenon of worldwide importance. They originated approximately 10,000 years ago and, until the Christian era, they were freshwater lakes. Some endemic Dalmatian plants can only be found on the rocky coast of the island. A beautiful endemic plant named Dubrovačka Zečina is the best representative of them all. The Mediterranean type landscape hides two natural specialties. The first are typical underground habitats: half-caves, caves and pits. The other specialty is Mljet's "blatine", which are rare occurrences of brackish lakes, which vanish from time to time. There is life in the lakes, but we know very little about it today apart from the fact that people have caught eels and marsh birds in them for centuries. Beautiful, rich forests once covered large areas of the Mediterranean Coast, but they are rarely preserved today as beautifully as they are on Mljet. The woods on Mljet gently descend all the way to the surface of the lakes, thus creating an image of unspoiled nature. The 12th century Benedictine Monastery of St. Mary is on Big Lake. The small island is an exceptional example of cultural and historical heritage dating back to the eras of the Illirian tribes, the Roman Empire and the Republic of Dubrovnik. Today, Mljet island is characterized by a stable settlement living in complete harmony with nature.”

Cruise to Dubrovnik. Dubrovnik is on the UNESCO World Heritage List and is one of the most beautiful Mediterranean cities. Its’ high stone city walls and the beauty of its ancient city centre has for many years attracted the likes of artists, historians, scientists and chance travellers.

Depart for a short sail to the Bay of Catvat. This is a great place to swim, relax and enjoy some time on the water. Catvat has been called ‘the St Tropez of Croatia’. Moor stern to and enjoy your final evening ashore or enjoy a meal under the stars.

Enjoy a leisurely breakfast before preparing to disembark by midday. The Dubrovnik airport is only 10 minutes from here. 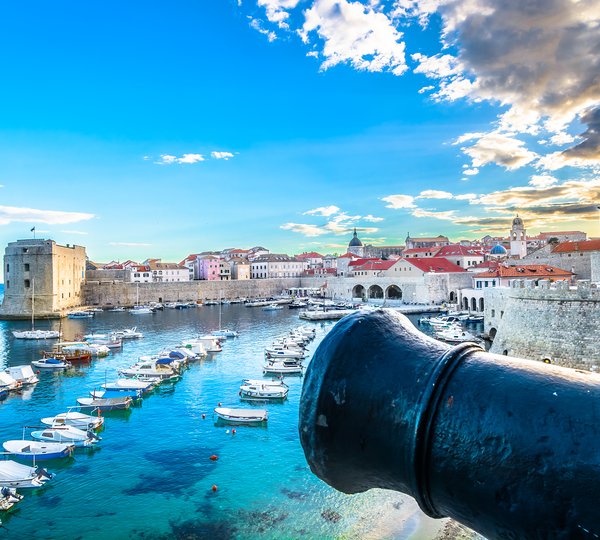 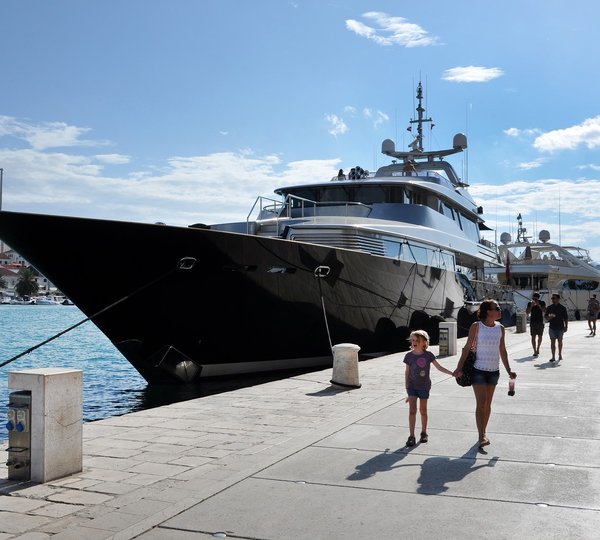