The Ocean Empire LSV (life support vessel) is a 44m Solar Hybrid Superyacht with 2 Hydroponic farms and fishing facilities to harvest the sea. Her solar powered propulsion systems and all the Hotel amenities of a luxury global voyager are supplied by harnessing 3 major sources of sustainable of energy.

The first and foremost source of energy is from the Sun which powers Solar Cells (covering the entire surface of the vessel) while at the same time illuminating 2 Hydroponic farms.

The second source is energy from the Wind which powers an auxiliary automated SkySail that drives the Ocean Empire to 18+knots while charging her GM ESS2 batteries through power sailing KER.

The MDR system is basically an ATMD utilized in skyscrapers such as Taipei 101 to reduce their swaying motion. In this application 16 tons of batteries are the Mass while linear generators produce up to 50 kws of electricity as they dampen the motion of the vessel.

Richard Sauter head of design commented “The Ocean Empire life support Superyacht liberates the Superyacht community from its strict dependence on unsustainable resources by harnessing the renewable collective power ever present in the Earths Biosphere”.

The Ocean Empire LSV is a state of the art Superyacht catamaran. As such her Green Tech innovations are able to optimize what is easily the most dynamic form of ocean going platform. Her Daimler Turbo Compound BueTec engine is the most advanced EPA Diesel ever built.  Her Sunpower Solar Cells are the most efficient to date as are her Voith Surface Drives.

As a Charter, a Plugged in Ocean Empire LSV is capable of feeding 360+Mwh’s of electricity to the grid. Enough energy to make up to 12,000 nautical miles of Chartered Carbon Neutral voyages every year 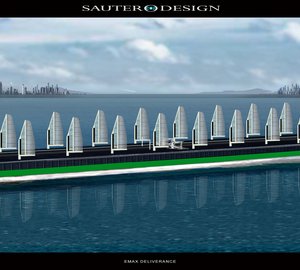 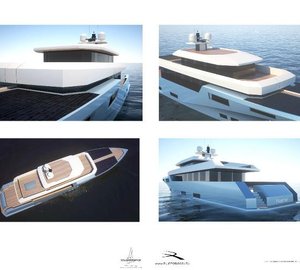