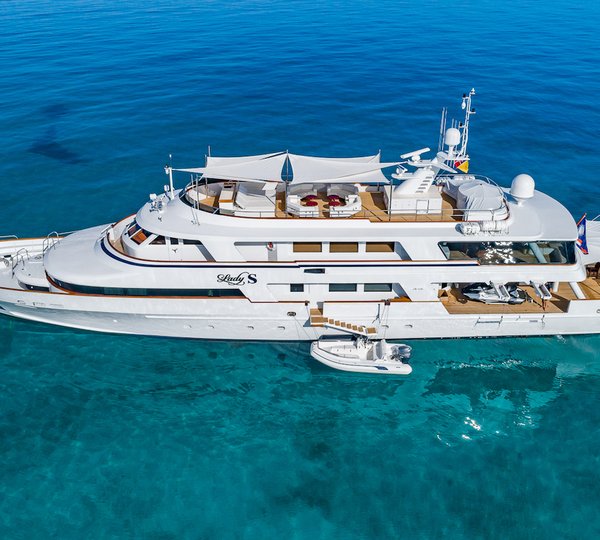 The Mediterranean Yacht Show returns to ...

The Mediterranean Yacht Show (MEDYS) is one of ...
Browse Motor Yacht Crews Section

Luxury Motor Charter Yacht 'Janie' is one of the Mediterranean's very best luxury yachts. She is not only a superbly appointed and well rounded yacht but she also boasts an exceptionally talented multinational crew to match. Please find some details on 'Janies's' crew below:

CAPTAIN Nicolas Koslowski/French
Nicolas’s passion for the sea rules his life. At 18 years of age he started working in diving in the Caribbean, and over the years has become a CMASS, Naui, Padi Master Instructor. Nicolas also spent two years as a Commando Diver instructor for the French army. After having spent seven years in the diving industry, Nicolas wanted a new challenge and to do more traveling and the yachting industry was a perfect solution. Since joining the industry, Nicolas has sailed the Caribbean, Bahamas, East Coast and the Mediterranean seas many times including three Atlantic crossings. He holds an MCA Master Yacht (3000 ton) license. Outside of yachting, the only place to find Nicolas will be somewhere he can swim and free dive.

CHEF Graeme Holst / New Zealand
Graeme has many years of experience on busy charter yachts. For example he was chef aboard SY Roseharty for 3 years prior to joining Chevy Toy. (ex Janie)

FIRST MATE Kim Marsinko / American
Originally from upstate New York, Kim was drawn to boating after crewing research vessels while attending Southampton College on Long Island. Participation in a sail training program furthered her interest in boating. She then moved on to the Sag Harbor Yacht Club where she was a dockhand and eventually started her career as crew on yachts. When not working Kim enjoys running, swimming, and surfing.

CHIEF STEWARDESS Alison O’Carroll / Australian
Alison began her yachting career in Antigua 4 years ago bringing her bright and bubbly personality. While growing up in sunny Brisbane, she caught the travel bug quite early while traveling with her parents to various amazing locations around the world. She has traveled throughout the Mediterranean, Caribbean and Pacific on her previous voyages. When she has time on her hands she enjoys dancing, snorkeling, wakeboarding and when in the winter climate, skiing. It’s always her pleasure to make people happy & comfortable. With a great love for what she does, Alison goes the extra mile to ensure that guests have a wonderful time on board M/Y Chevy Toy, leaving with the best of memories.

ENGINEER Michael Mason / Australian
Michael was born in Victoria, Australia and is now of late from Hervey Bay, Queensland. He is a trained & qualified Mechanical Engineer. Michael took the opportunity to join the yacht industry in 1999 and has cruised extensively though Asia, Mediterranean, Croatia, Sea of Cortez, Caribbean, Atlantic and Pacific coasts of USA, etc. Michael joined Chevy Toy in spring 2006. His hobbies include most outdoor activities, such as snow skiing, scuba diving, 4 wheel driving and camping.

STEWARDESS Jessica Lee / South African
Jessica was born and raised in South Africa, she grew up in a small coastal town where life generally revolved around the Ocean Life. Her main passion is the Ocean and anything to do with it. She has surfed her whole life and spends more of her time in the water than out. Other sports she enjoys include wakeboarding, mountain climbing, river rafting and experimenting in other extreme sports. As soon as she finished school Jessica bought a ticket to England and spent a year working and backpacking through Europe. This sparked a great interest in travelling, and she decided she wanted to see as much of the world as possible! With her passion of the ocean and travelling it seemed the obvious choice to work in the yachting industry. She has been involved for over a year now and enjoys her lifestyle greatly.

Josh Duda is 22 and was born in Bend, Oregon where his love for the outdoors brought him to enjoy many activities with rock climbing being his passion. His success in this sport had him travelling all over the country competing at a national level. After already have completed one year in the yachting industry Josh decided to explore the world a little more and headed to Sweden, New Zealand and Australia. Traveling has been a very big part of Josh's life so yachting is a very good fit for him and if all goes to plan, it will for some time to come. He hopes to one day work his way to captain but for now bosun is working out great.

DECKHAND Johannes Kinghed / Swedish
Johannes is from the west coast of Sweden. Back home he was working as a swimming teacher and fitness instructor and also spent 15 months in the Swedish Marine Corps. Johannes’ biggest interest in sports is hockey and soccer, during the winter he likes to do a lot of snowboarding which is another great passion. After a recommendation from his cousin he decided to try the yachting industry. Now with one year experience of yachting he feels it is a great industry to be a part of. Travelling has always been a big part of his life and to combine that with work is a perfect combination for Johannes!


Please use the form below if you have any questions or comments about Luxury yacht Janie.