Malaga, on the Spanish Mediterranean, is more than just the birthplace of ... 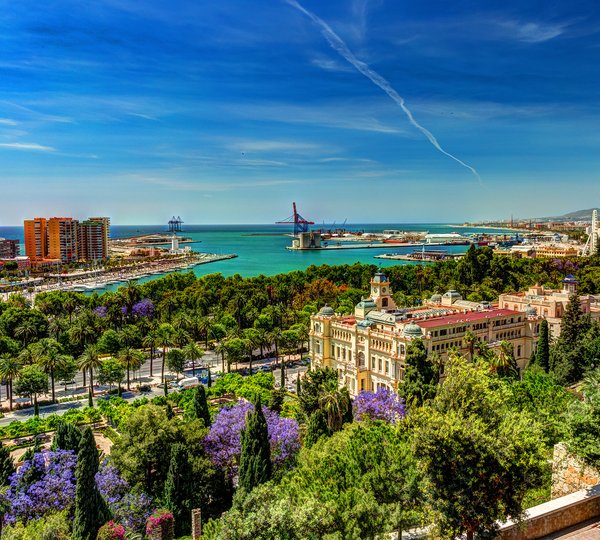 Aerial View Of Malaga From Gibralfaro Castle Including Port Of Malaga, Alcazaba Castle And The Cathedral, Andalucia, Spain

Malaga, on the Spanish Mediterranean, is more than just the birthplace of Picasso. This charming and cosmopolitan Spanish holiday luxury yacht charter destination is the capital of the Costa del Sol and is set on a perfect spot along Andalujia Bay.

The province of Malaga is bordered by the Spanish provinces of Granada, Cordoba, Sevilla and Cadiz, and the Mediterranean Sea on its southern section. The province is comprised of 6 regions and some 100 municipalities. Aside from its capital, other major cities within the province of Malaga include Ronda, Antequera, Velez-Malaga and Marbella.

Yachting enthusiasts are attracted to this bustling city because of its rich history and cultural heritage and subtropical climate. One notable fact about his old city is that its port facility has been in existence since 600 BCE, and to this day, it continues to serve a thriving fishing industry. The city is also a major international cargo handling hub and this is the reason why the port facility in the city of Malaga is one of the busiest and most advanced in all of Spain. It boasts of complete services and amenities, making it an important stopover for seasoned sailors and yacht charter enthusiasts.

A Superyacht Charter in Malaga and the Costa del Sol

The bustling city of Malaga can be conveniently accessed through the airport terminal, the third largest in Spain, that is located some 11 kilometres the city’s main district. Tourists and yachting aficionados can transfer to their final destination within the city through shuttle bus service, taxi or rental car. From the airport terminal, you should take A-7 E-15 road link, which straddles the area from Gibraltar to the city of Almeria and proceed due east going to Murcia. Another way to access the city is by taking a relaxing train ride, which will bring you straight to the city’s main district.

Of course, the best way for seasoned sailors to access the city of Malaga is by sailing to the region and dropping anchor at its port facility. Tourists who are spending their holiday on board luxury yacht and super yacht come from various ports in the African continent such as Melilla.

Malaga is steeped with tradition and history. It is one of the several important yacht charter destinations in Spain that is able to maintain a seamless mix of archaeological marvels and contemporary elements. For first-time visitors to this city, what is most striking about Malaga is the warm and welcoming disposition of the locals. This openness and distinct positive trait will surely make Malaga a perfect home away from home for yachting enthusiasts, especially those who are spending their holiday in the Mediterranean.

Some things to see in Malaga

There are a lot of popular attractions and important destinations in Malaga, and you will surely have your hands full when you spend a few days of your holiday in the city of Malaga. Among the popular destinations are those that are found in the mountainous section of Malaga. These popular attractions are accessed by taking the old Granada Road. This road link will take you to one of the most beautiful areas in the city, which boasts of one of the most exhilarating views of the local landscape.

The area features several rustic taverns such as Tunel, Mirador, Tres Cincos and Boticario. Other important attractions in the area include the Museo Antropologico, the Parque Natural de las Contadoras and several ancient oil mills and wine presses.