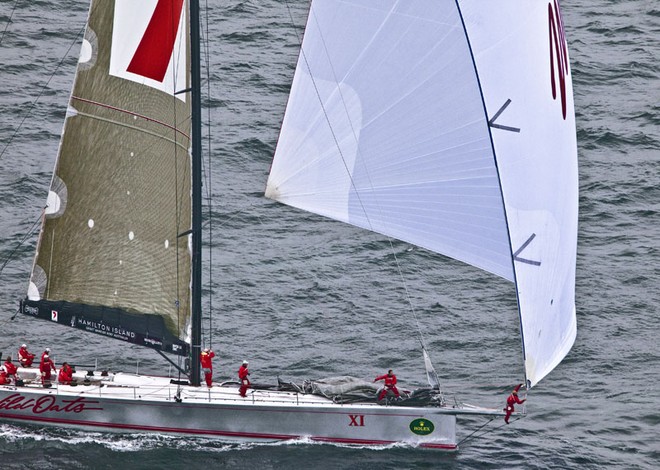 It was a tidy day’s work for Wild Oats XI; a Reichel/Pugh 100 that sails under the burgee of the Hamilton Island Yacht Club, setting a new time of 14 hours, 13min, 35 sec to best the 63 foot Reichel/Pugh designed Loki, by two hours, 19 mins 12 sec in variable conditions.

A very pleased Mark Richards said that it was a great night out on the water and great preparation for the supermaxi, prior to her taking to the start line on Boxing Day, in an attempt for claim a fifth line honours win in the Rolex Sydney Hobart Yacht Race.

“The boat performed beautifully well in the conditions…but it was a tough last four to five hours going dead upwind and luckily the breeze didn’t die out completely,” Richards said. “Our weather modelling had us finishing a few hours earlier than this, but that’s the vagaries in the weather for you – whatever will be will be. We can’t be unhappy with taking the record.”

With his focus directed at securing a fifth line honours win in the Rolex Sydney Hobart, Richards said there is still lots of training and preparation to do yet. “This race is an important part of our program before starting the Hobart on Boxing Day, and we will be out there practising and racing to ensure we are match fit,” he added.

Although the Bureau of Meteorology predicted southerly winds of 10-20 knots, it was a different story on water.

The fleet of 36 yachts, one of the largest in recent history for this race organised by the Cruising Yacht Club of Australia, got off to a clean start yesterday evening at 8.00pm, in 11 knots of south sou’west breeze. Wild Oats XI stayed close to the pin end of the start line, with Richards putting the boat in a perfect position to have a clean run up the western channel of the harbour and out of the heads.

Hoisting their huge Code 0 sail, Oats streaked away from Lahana who was hot on her heels. Stephen Ainsworth’s Loki opted for the middle of the start line and led the smaller boats up the harbour, with many unfurling their spinnakers, making the most of the inshore breeze.

At the 0700hrs sked this morning, Bruce McKay’s Sayer 12 Wasabi reported “It was an excellent kite ride up the coast with the normal fare of dolphins joining in the ride and bright moonlight. AFR (Midnight Rambler) as always is close by.”

“We rounded the Island just after 5.30am – everyone has enjoyed breakfast of toasted ham, cheese and tomato sandwiches and fruit, with the crew now sitting on the rail with coffee and praying for the wind to go east as forecast,” McKay said.

Julie Hodder, navigator on Rob Reynolds’ DK46 Exile, said “We were very happy to get out of Sydney Heads not far from Lahana and we had a great run up the coast to Port Stephens. From there to Cabbage Tree Island the conditions got very sloppy and slow.”

“We rounded the Island with Krakatoa II, but as they are not suited to going to windward, we overtook them and made our way out to sea. AFR Midnight Rambler and Kerisma tacked away after rounding the Island and they fared a little better.” Hodder added.

Shortly after 07:30hrs, Exile was wallowing in a hole in the breeze near Stockton Bight, having experienced many changes in the direction of the breeze. With just over 72 nautical miles to go and maintaining a boat speed of just 2 knots, the crew were beginning to cancel their social engagements for this evening, but were pleased that the sun was out, with Hodder quipping she had packed her bikini top!

Danny McConville, crew boss on Darryl Hodgkinson’s Beneteau 45 Victoire, also reported a favourable night’s sailing with a kite run all the way to the Island, but getting parked once they rounded the Island.

“The crew dined on some excellent pasta and have just been re-fuelled by breakfast, whilst waiting for the breeze to kick in, but at least the sun is out! What more could you want?” McConville noted.

And shortly after that, the much anticipated breeze kicked in at 9 knots from the south west bringing Victoire alongside AFR Midnight Rambler just near Stockton Bight. A slight mishap on a tack saw AFR get caught in the current, losing all wind and doing an unplanned 360â°.

Just one retirement had occurred overnight – Minerva, the DK43 owned by Tim Cox and skippered by Edward Cox, retired due to steering problems. She has safely returned to her home port.

An updated report will be sent out once the 36-boat fleet has finished the race and overall positions are known. 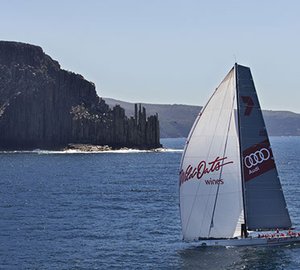 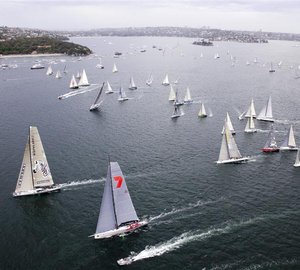 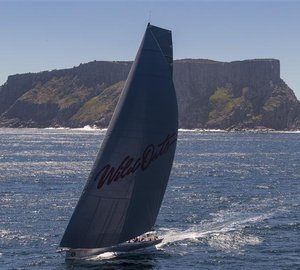